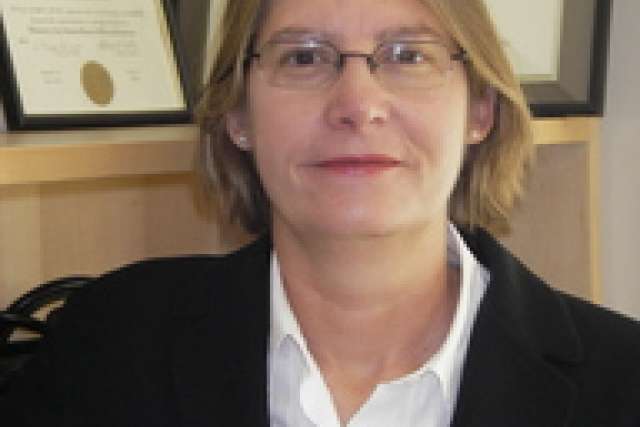 Taking the pregnancy hormone estriol along with their conventional medications helped patients with relapsing-remitting multiple sclerosis (RRMS) avoid relapses, according to results of a Phase II randomized, placebo-controlled study led by UCLA researchers.

The study, published online in Lancet Neurology, was truly translational. The UCLA team took observations from the bedside, tested them in the laboratory and took those findings back again to patients in clinical trials, said the study’s lead author Dr. Rhonda Voskuhl, professor in the UCLA Department of Neurology and director of UCLA's Multiple Sclerosis Program.

It’s long been observed that during the second half of pregnancy, women with RRMS have reduced relapses, but the reason was unclear. It is also during this period that the fetal placenta produces estriol, increasing the hormone levels in the blood. This protection during pregnancy occurs not only in MS, but also in other autoimmune diseases such as psoriasis and rheumatoid arthritis.

Voskuhl took this information to the lab. She hypothesized that increased estriol in the blood might play a role in suppressing a woman's immune system so that the fetus is not rejected as being foreign, having half of the father’s proteins. This temporary suppression of the immune system would be good for pregnant mothers with autoimmune diseases. Her team found that treatment with estriol was protective in the MS model. That led to a successful pilot clinical trial in 2002 at UCLA and then the Phase II trial, launched in 2007 at UCLA and 15 other sites across the United States.

“The beauty of estriol is that it is not a shot and can be taken in pill form, and also that it's not a new drug. It has decades of safety behind it,” said Voskuhl, who holds the Jack H. Skirball Chair for Multiple Sclerosis in the UCLA Department of Neurology. “Also, current MS treatments are very complex to manufacture. These findings hopefully will pave the way for oral, safe treatments that are more widely accessible, since estriol is simple and naturally occurring.”

Multiple sclerosis is an autoimmune disease of the central nervous system where immune cells from the blood attack the tissue surrounding the brain's nerve fibers. Called myelin, this tissue is like the insulation wrapped around an electrical wire. When the myelin is damaged, it interferes with the ability of the nerves to send signals to and from the brain, resulting in symptoms including cognitive problems, difficulty with walking, poor vision and other disabilities.

In RRMS, there are clear episodes of inflammatory activity, or relapses. During a relapse, there are new or worsening symptoms, accompanied by inflammatory lesions in the brain. A relapse can continue anywhere from several days to months. Relapses are usually followed by remission, or improvement. However, some residual symptoms may remain, and after many years people with RRMS often transition to a progressive form of the disease. During the progressive phase, there are no longer relapses, but instead gradual worsening of permanent disabilities and loss of brain volume or atrophy.

In the lab, Voskuhl and her team discovered that estriol potentially provides a one-two punch against the disease, both reducing the ability of immune cells to attack the brain, while also making brain cells more resistant to damage if any immune cells do make it through. Specifically, they showed that estriol treatment improved cognition and prevented atrophy of the cognitive region of the brain. It seems that during pregnancy, estriol can both suppress the immune system and protect the brain, for not only is it important to avoid rejection of the fetus as foreign, it is also critical to protect the developing fetal brain. While these two effects may be designed to protect the fetus, they may also be exactly what the doctor ordered for women with MS.

In 2002, Voskuhl completed the pilot study, in which 10 non-pregnant women with MS were given estriol, yielding a greater than 70 percent drop in inflammatory lesions in the brain within only six months of treatment.

In the Phase II study, researchers enrolled 164 patients, with 83 allocated to the estriol group and 81 to the placebo group. Both arms continued their conventional medication, injectable glatiramer acetate. The team found that the patients taking estriol had a third to a half as many relapses compared to those taking the placebo, with this improvement occurring over and above that provided by their conventional treatment. In addition, when estriol levels were the highest, there was improved cognitive function and less atrophy of the brain area related to cognition. The treatment was well tolerated during the two years the volunteers took estriol and the only significant side effect was irregular menstruation. To date, there is no FDA approved treatment for MS that improves disabilities.

These two trials are very unique in that neither were funded by a pharmaceutical company. Rather, they were funded by the National Institutes of Health (NIH) and the National Multiple Sclerosis Society, consistent with the new NIH policy that more research should focus on sex differences in disease. Additional major funding was from the Conrad N. Hilton Foundation, whose mission it is to improve the lives of disadvantaged people throughout the world. Synthetic Biologics, Inc., provided estriol and placebo for the multicenter trial and has licensed certain rights from UCLA.

Going forward, Voskuhl hopes to see a Phase III trial conducted to replicate these findings, since this is necessary for FDA approval of estriol for MS. She continues to seek support to advance this as well as other MS research projects.

It is estimated that more than 2.1 million people are affected by MS worldwide. Approximately 85 percent of patients are diagnosed at onset with RRMS, the most common form of MS.

“These findings are consistent with the hypothesis that increased concentrations of estriol during pregnancy might mediate, at least in part, the protective effect of pregnancy on relapse rates,” the study states. “A phase III study of estriol in multiple sclerosis is needed to confirm these findings as well as to explore potential effects on disabilities.”

The UCLA Department of Neurology, with over 100 faculty members, encompasses more than 20 disease-related research programs, along with large clinical and teaching programs. The department ranks in the top two among its peers nationwide in National Institutes of Health funding.
Media Contact:
Kim Irwin
310-794-2272
[email protected]