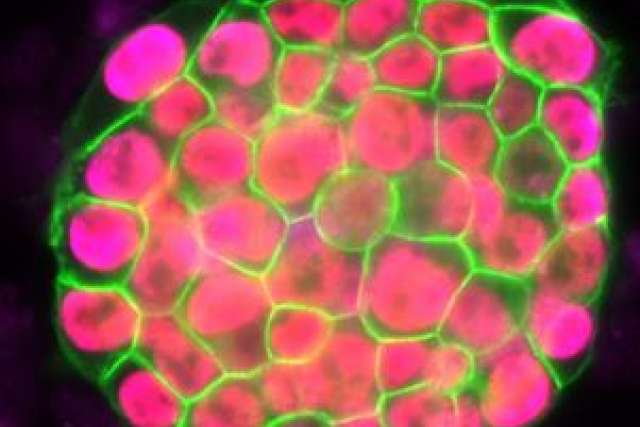 The study, conducted by researchers at the Eli and Edythe Broad Center of Regenerative Medicine and Stem Cell Research, was published this month in the journal Cell.

Induced pluripotent stem cells, known as iPSCs, are cells that can be generated from adult cells and then, like embryonic stem cells, be directed to become any cell in the human body. Adult cells can also be reprogrammed in the lab to change from a specialized cell back to an iPSC (and thus becoming a cell similar to that of an embryonic stem cell).

Reprogramming takes one to two weeks and is a largely inefficient process, with typically less than one percent of the starting cells successfully becoming an iPSC. The exact stages a cell goes through during the reprogramming process are not well understood. This knowledge is important, as iPSCs hold great promise in the field of regenerative medicine, as they can reproduce indefinitely and provide a single source of patient-specific cells to replace those lost to injury or disease. They can also be used to create novel disease models from which new drugs and therapies can be developed.

Vincent Pasque and Jason Tchieu, postdoctoral fellows in Plath’s lab and co-first authors of the study, developed a roadmap of the reprogramming process using detailed time-course analyses. They induced the reprogramming of specialized cells (that could only make more of themselves, and not other cell types), then observed and analyzed on a daily basis or every other day the process of transformation at the single-cell level. The data was collected and recorded during a period of up to two weeks.

Plath’s team found that the changes that happen in cells during reprogramming occur in sequentially, and that importantly, the stages of the sequence were the same across the different reprogramming systems and different cell types analyzed.

“The exact stage of reprogramming of any cell can now be determined,” Pasque said. “This study signals a big change in thinking, because it provides simple and efficient tools for scientists to study stem cell creation in a stage-by-stage manner. Most studies to date ignore the stages of reprogramming, but we can now seek to better understand the entire process on both a macro and micro level.”

“This reflects how cells do not like to change from one specialized cell type to another and resist a change in cell identity,” Pasque said. “Resistance to reprogramming also helps to explain why reprogramming takes place only in a very small proportion of the starting cells.”

With these findings, Plath’s lab plans future studies to actively isolate specific cell types during specific stages of reprogramming. They also hope the research will encourage further investigation into the characteristics of iPSC development.

“This research has broad impact, because by understanding cell reprogramming better we have the potential to improve disease modeling and the generation of better sources of patient-specific specialized cells suitable for replacement therapy,” said Plath, who is a professor of biological chemistry. “This can ultimately benefit patients with new and better treatments for a wide range of diseases.”

The research was supported by grants from the California Institute for Regenerative Medicine, the state’s stem cell agency. Additional funding was provided by the UCLA Broad Stem Cell Research Center through philanthropy and other sources.