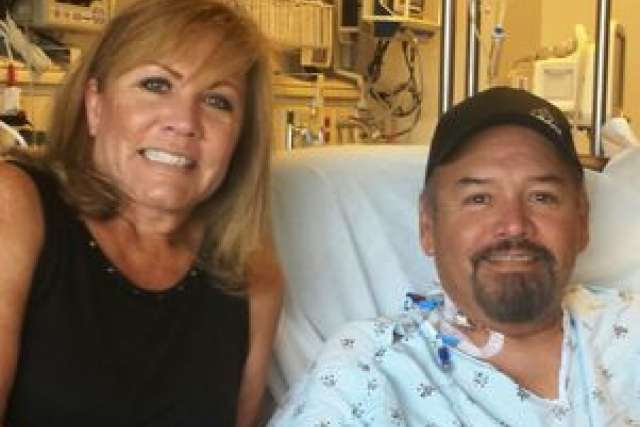 “I don’t know what to say,” Frank Ybarra said to Guadalupe Villanueva as they embraced shortly before the surgery.

“You don’t have to say anything,” Villanueva said. “This is our destiny, from here on.”

“This is a step; it’s a start,” said Ybarra, who had been on dialysis due to kidney failure since September 2012.

“Yep, it’s a beginning,” she replied.

Both grew up with convoluted family histories entangled in rumors and misinformation. Ybarra grew up believing that the people who had lovingly raised him were his birth parents and that a man named Cliserio was his uncle. But last October, Ybarra discovered he was adopted.

Villanueva learned at age 8 that she was adopted and spent years searching for her birth mother at the urging of her adoptive father shortly after his wife died.

Ybarra, who turned 53 on Friday, June 27, and 54-year-old Villanueva — or Lupe, as everyone calls her — both live in Oxnard. Over the years their lives intersected in ways that seemed as if they were being pushed together by fate.

In the early ’90s, Villanueva worked at a local packing company where Ybarra’s wife happened also to be employed. They became close friends. One day, employees were asked to bring in their baby pictures for a company newsletter. When Ybarra’s wife saw Villanueva’s photos, she commented, “You and my husband could be brother and sister!”

But Villanueva had since learned that Cliserio was her father, so she thought Ybarra could, in fact, be her cousin. She also found out that a woman named Lala was her birth mother and that her mother had lied to Cliserio, telling him that the baby had died at birth.

Ybarra and Villanueva would often meet at family gatherings, funerals and other social settings. A mysterious bond developed between them. They seemed to think the same, sometimes finishing each other’s sentences, and even liked the same foods.

Meanwhile, within the extended family, rumors circulated, sometimes jokingly, but sometimes not. On his deathbed in November 2000, Cliserio inexplicably gave Ybarra many of his belongings. Puzzled, Ybarra thought the gifts should be going to his children. Cliserio had had children by other women, Ybarra said.

Eventually, Ybarra discovered the truth: Cliserio was his father, which made Villanueva his half-sister.

Then last October, one of Cliserio’s daughters revealed a family secret to Villanueva about Ybarra.

“I don’t know how to tell you this,” the woman said hesitantly.

“I know what you’re going to say,” Villanueva said. “We’re half-brother and half-sister.”

“No, you’re full brother and sister,” the other woman said. “Lala was his mother too.”

In December, Ybarra and Villanueva took a DNA test that confirmed their relationship beyond any doubt.

When Villanueva found out that her new brother needed a kidney, she offered him one of hers. But Ybarra wasn’t so sure. “I said ‘Lupe, it’s not like you’re passing a shoe on to me’” he said, but his new sister was determined.

Tests showed they were a perfect match for the kidney donation, and on June 24 Villanueva gave her new brother a kidney.

“We’re actually going to be really part of each other now,” he said.