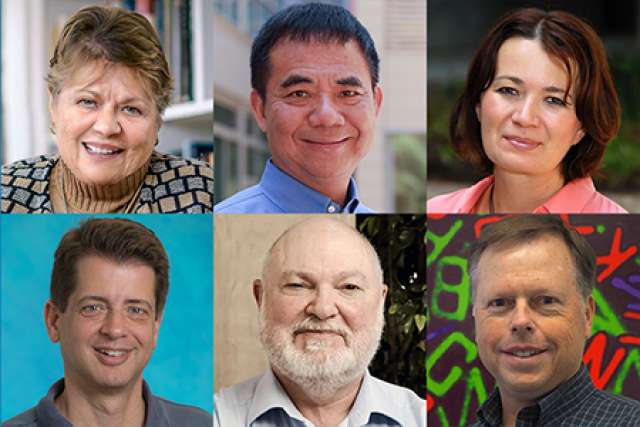 The American Association for the Advancement of Science, which is the world's largest scientific society, has named six UCLA faculty members as 2019 fellows. Since 1874, the AAAS, which publishes the journal Science, has chosen members for their distinguished efforts to advance science or its applications.

Dr. Paula Diaconescu, professor of chemistry and biochemistry. Diaconescu's research focuses on the design of reactive metal complexes with applications to small molecule activation, organic synthesis and polymer formation. She is being honored for "seminal contributions to the field of catalysis, particularly for applications of switchable catalytic systems to block copolymer synthesis."

Dr. David Glanzman, professor of integrative biology and physiology and of neurobiology. Glanzman studies the cell biology of learning and memory in marine snails and the zebrafish. He transferred a memory from one marine snail to another in 2018, thereby creating an artificial memory. Glanzman is being honored for "his groundbreaking research on learning and memory, particularly on memory consolidation and erasure."

Dr. Margaret Jacob, distinguished professor emeritus of history. Jacob's expertise includes the history of science and intellectual history. She has played a critical role in shedding light on how the scientific and theoretical advancements of the Enlightenment worked their way into the mainstream of 17th- and 18th-century life. Jacob is being honored for "distinguished and groundbreaking contributions to the cultural history of the Scientific Revolution, Newtonianism, and the Enlightenment, and effective communication of these to wider audiences."

Dr. Thomas Mason, professor of physical chemistry and professor of physics. Mason's experimental research focuses on designing and studying new forms of soft matter that have innovative multi-scale dynamic micro- and nano-architectures and morphologies. He is being honored for "distinguished contributions to the field of soft matter, particularly for creating and developing thermal-entropic passive microrheology, and for advances in emulsification and nanoemulsions."

Dr. Stephen Smale, vice dean for research at the at the David Geffen School of Medicine at UCLA and distinguished professor in the department of microbiology, immunology and molecular genetics. Smale's research addresses the molecular mechanisms of gene regulation in cells of the immune system. He is being honored for distinguished contributions to the field of transcriptional regulation of eukaryotic gene expression, particularly in the immune system."

A total of 443 scholars were selected as fellows this year. They will be honored Feb. 15, 2020, at the association's annual meeting in Seattle.