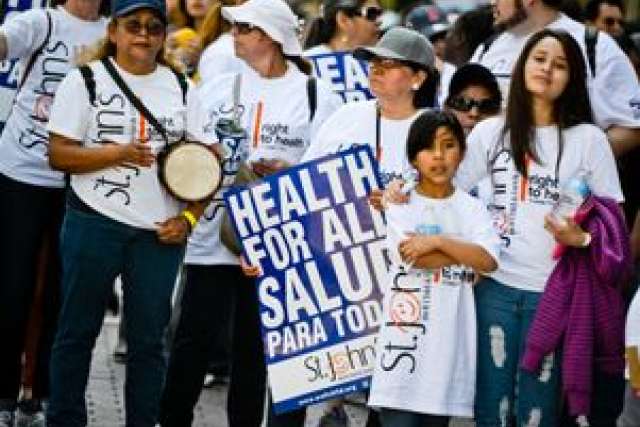 Undocumented immigrants in California see the doctor and visit emergency rooms significantly less often than U.S. citizens and documented immigrants, according to a study by the UCLA Center for Health Policy Research published in the May issue of the journal Health Affairs.

The UCLA researchers found startling differences in ER visits by adults: One in five U.S.-born adults visits the ER annually, compared with roughly one in 10 undocumented adults — approximately half the rate of U.S.-born residents.

"Most people who go to the emergency room have insurance and are not worried about providing documents. The undocumented who end up in the emergency room have often delayed getting any care until they are critically sick," said Nadereh Pourat, the study's lead author and director of research at the UCLA Center for Health Policy Research.

Among the uninsured, undocumented immigrants use the fewest health services

Of all California residents who lack insurance, undocumented adults who are uninsured had the fewest mean doctor visits of all groups — 1.6 per year, compared with 1.8 visits for each of the following uninsured populations: U.S.-born residents, legal permanent residents and naturalized residents. Nine percent of uninsured undocumented immigrants had visited the ER, significantly lower than the 12 percent of uninsured U.S.-born residents, who had the highest ER use of all groups.

To determine undocumented immigrants' use of health services in the state, the study authors used 2009 California Health Interview Survey (CHIS) data to predict the likelihood of respondents being undocumented. CHIS is the only large representative survey that has information on legal residence status. This data improves the accuracy of assessing undocumented status and health care use.

In 2009, California was home to more than 2.2 million undocumented immigrants, the study found. And while these immigrants make up 6.8 percent of California's residents, they represent nearly a quarter of the state's uninsured population.

"The great majority of undocumented in California are working-age adults who contribute greatly to California's economy by working in physically demanding service, agriculture and construction jobs," Pourat said. "It makes financial sense to make sure they have affordable health coverage options so they can stay healthy."

Lower utilization of care comes at a great cost, the study findings suggest: The undocumented don't get preventive care, potentially leading to more advanced disease and higher public expenditures. If undocumented immigrants had access to health insurance, the authors say, their doctor and ER visits would remain below or be the same as documented residents.