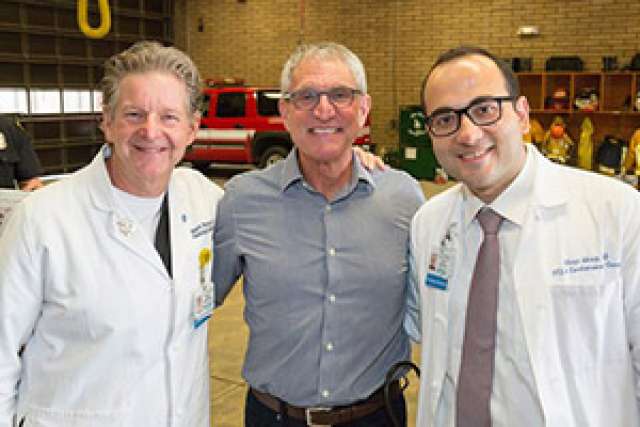 A long-distance runner with more than 20 marathons under his belt, 61-year-old Charles Gold was at mile 22 of the Los Angeles Marathon in March and thinking about the finish line when it happened — he sank down on one knee, vaguely aware of the faces around him, before collapsing in cardiac arrest.

Within minutes, Los Angeles Fire Department emergency medical technicians and firefighter/paramedics stationed along the race course arrived at his side to give him CPR, defibrillate his heart and provide other advanced life support measures.

Shortly afterward, Gold arrived with the team at Ronald Reagan UCLA Medical Center where the hospital’s emergency team further assessed, stabilized and expedited his care. Although he didn’t remember much, he was alive and alert.

“He even joked with us about now having ‘a new birthday,’” recalled Dr. Mark Morocco, a UCLA emergency physician who was the attending doctor that day.

Reed Hutchinson/UCLA
Charles Gold thanks Los Angeles Fire Department staff who came to his rescue as a TV news crew films them.

Today, almost three months after his heart attack, Gold, a certified public accountant, was at a press conference at a downtown fire station to thank Los Angeles Fire Department personnel and members of the UCLA medical team who all played a part in saving his life.

“LAFD saved Mr. Gold on the street by using an automated external defibrillator and other support measures to shock his heart back into a normal rhythm,” said Morocco. “Even though he was smiling, we kept a close watch, and he remained stable, which gave us time to get our specialized in-patient teams involved to take over his care.”

Gold was then rushed to the catheterization lab where UCLA cardiologist Dr. Michael Lee performed coronary angiography by introducing a special contrast dye to better visualize key blood vessels of the heart. This revealed a condition that Gold was born with called “myocardial bridge,” which causes a blood vessel in the heart to get compressed during each heartbeat.

Further evaluation, including magnetic resonance imaging (MRI) and assessment of the electrical activity of the heart, also revealed an abnormal heart rhythm and scar formation where he had thickening of the heart muscle. Under the leadership of UCLA cardiologist Dr. Olcay Aksoy, extensive testing and discussions among the multidisciplinary team of cardiologists and heart surgeons led to the implantation of a defibrillator to provide ongoing regulation of the patient’s heart rhythm.

The compressed blood vessel was further evaluated by Aksoy using specialized stress testing that measured the pressures exerted on this artery when the heart beats. The test results led to the decision that the blood vessel was not the primary cause of the problem and did not need intervention. Gold’s doctors will continue to monitor him.

“Mr. Gold was very fortunate,” said Aksoy. “Only a small percentage of people survive the type of cardiac arrest he had experienced.”

Gold, who had run his first marathon in 1993 and has traditionally been up at sunrise every day to go for a run, said he felt like he had received a second chance at life.

“The fact that this occurred at the L.A. Marathon is nothing short of the luckiest thing that could have happened to me,” said Gold. “I’ve spent years and years doing long-distance training, marathons and trail runs, and this could have happened in the middle of nowhere. And that would have been that.”

Aksoy explained that professional athletes and those who perform competitive endurance sports like running, cycling or swimming can have a thickening of the heart wall. It’s the way the heart adapts to the aerobic workload, he said.

In Gold’s case, Aksoy noted that the marathon runner had an unusual area of scar formation and thickening that led to the cardiac arrest — which was apart from the expected athlete heart that cardiologists typically observe.

Athletes should watch for symptoms during exercise and to alert their doctor if they experience shortness of breath, chest pain or lightheadedness. Patients at risk for cardiac arrest should be diligently screened.

A dynamic, multidisciplinary team at UCLA helped identify and address Gold’s heart issue, including the emergency department team, interventional cardiologists, electrophysiologists, heart surgeons, and the nurses and staff at the UCLA Cardiac Care Unit. They provided ongoing care for the patient during his weeklong stay in the hospital.

“It is truly inspirational to see a patient come back from such a major health event,” said Jennifer Longstreet, a registered nurse who was also in the emergency department and helped with his care.

Happily, Gold has been cleared by his doctors to run again, although at a slower pace. He completed a half marathon early last month.