UCLA student finds a better way to deal with her diagnosis 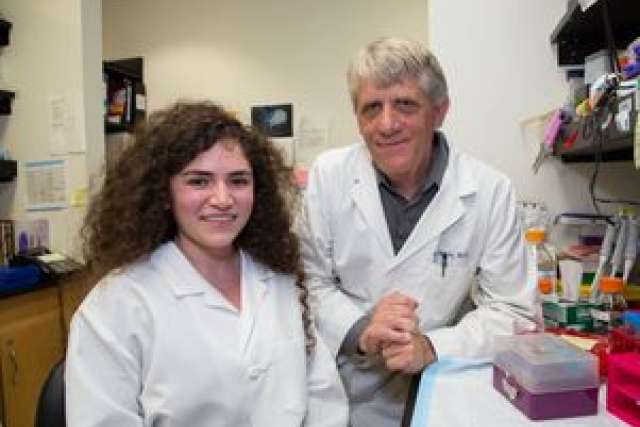 It seems that everything in Megan Cory’s life has pointed her toward a career in medicine. It’s what she has wanted to do all her life — even after she got some bad news about her own health that would have frightened and discouraged most people.

Instead of lamenting her diagnosis of type 1 diabetes, she has used that health condition to benefit UCLA and the community in several ways.

Ever since childhood, Cory has been fascinated by what doctors do. From her interactions with a neighbor and a family friend who were both doctors, she knew early on she wanted to be just like them.

“Ever since then, I knew that doctors make people feel better,” said Cory, now 20 years old and a UCLA biochemistry major with a minor in theater. “The cool thing is that … everything that’s happened to me since then has strengthened my wanting to be a doctor. It’s my calling. I didn’t have an epiphany. I felt like this my whole life, and I know I’m headed in the right direction.”

Her decision to pursue medicine was also affirmed when she was diagnosed with type 1 diabetes.

Cory had always been active — almost tirelessly so — in theater, science fairs and athletics. “Everything you can think of, I was involved in,” she said. But at age 13, she was also constantly thirsty, and even though she was eating more, she was losing weight. So her parents took her to see a doctor who, at first, thought she was simply too busy. A visit to a cardiologist whose sister was an endocrinologist brought a diagnosis. “He smelled my breath, and he knew something was wrong,” Cory said.

She learned she had type 1diabetes two days after her 14th birthday. It’s a day she will never forget. “I can play it like a movie in my head,” she said.

Her mother and father were sitting in the exam room while Cory was lying on the bed when the doctor gave them the news. Her mother passed out, and her father was devastated. Cory cried — but only because she didn’t understand what it all meant.

“After a few minutes, I stopped crying, and I asked myself, ‘Why are you crying? You don’t even know what it is,’” she recalled. “I stood up and asked the doctor, ‘What’s next? What do I need to do? This diabetes thing is not going to stop me from doing the things that I love.’”

Impressed with her positive attitude, her doctors later asked her to talk to other teens with diabetes. So many of them think of diabetes as a form of punishment, making it difficult for them to deal with it, she said.

“I think of it another way: Diabetes is manageable; it’s just a little inconvenience, a little extra something you have to do,” she said.

That isn’t to say it’s not serious, she points out to teens with diabetes. But at least people with diabetes have the means to control their disease, which is something that people with other diseases can’t do. “Be thankful that we have something we can control,” she tells them.

Cory has also led by example. In high school, she became a Texas state tennis champion three times in a row from 2009 through 2011. She participated in various diabetes-related programs for young people, was a finalist in the 2010 International Science Fair and performed in plays, mostly in musicals.

Now a student at UCLA, her focus is on preparing for medical school and helping her peers with diabetes and others who are dedicated to educating people about both types of diabetes. She started DiaBeaters, a campus group that promotes a healthy lifestyle to help prevent the disease.

This summer, students in DiaBeaters talked about prevention to students and parents attending the UCLA Medicine Pediatrics Comprehensive Care Center Sports Fair in Santa Monica. Cory is hoping to reach out to more high school students as well as local and other businesses throughout Los Angeles.

Through DiaBeaters, she also helped raise $1,000 for the Larry L. Hillblom Islet Research Center at UCLA for diabetes research.

Cory, who’s now interested in becoming an endocrinologist, has been conducting research at the Hillblom center on alpha mass in non-diabetic people over their adult lifespans. Alpha cells produce glucagon, which helps maintain blood sugar levels between meals. She’s found that this mass remains constant with age even as the tissue around it withers away.

Dr. Peter Butler, director of the Hillblom center, said he's been particularly impressed with Cory’s enthusiasm and diligence in her research, as well as her commitment of time and support to the cause.

“She has been a most welcome student volunteer in the UCLA islet research center,” Butler said. “She is passionate about the need to bring greater awareness to the student community about diabetes. We are fortunate to have her here at UCLA.”

This summer Cory applied to the David Geffen School of Medicine at UCLA and other medical schools. She said she hopes she can stay on this campus to continue growing DiaBeaters, working on her research and staying involved with the biochemistry society BiochemASE, which she co-founded.

“I want to show people that when something bad comes into your life, there’s a different way to approach it,” Cory said.