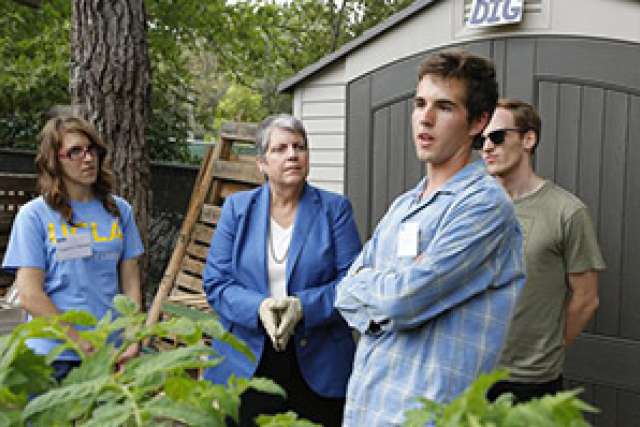 UCLA student Ian Davies (in the foreground) is working with three other students to install two new campus community gardens. Their project was funded by the UC Global Food Initiative, which was announced by UC President Janet Napolitano during a visit to UCLA last July.

Vanessa Moreno knows what it’s like to feed a family on a tight budget. The fourth-year international development studies major watched her own mother, a single parent, do it when she was temporarily unemployed. Moreno is now chronicling on video the story of a single mother of five as she struggles to meet the same challenge.

Fellow UCLA senior Sanna Alas, a human biology and society major, knows the value that urban gardening can bring to a community. She is helping students at Jordan High School in Watts tell their story through film as they turn an abandoned plot of land into a community garden for their school.

Alas and Moreno, who started these projects in the fall quarter when they were taking a class on filmmaking for social change, are now expanding their documentaries, thanks to a $2,500 fellowship that each student received from the UC Global Food Initiative Student Fellowship Program.

“This fellowship supports our project beyond the classroom,” said Alas. “We want to build upon it, make it bigger and include the voices of more people.”

The University of California Global Food Initiative, launched in July 2014, is a systemwide commitment to harness UC resources to sustainably and nutritiously feed the world’s population by 2025. Moreno and Alas are two of 16 UCLA undergraduate and graduate students to receive funding from this initiative to support four projects.

Other funded UCLA ventures include a research project to evaluate the impact and sustainability of farmer hubs in California that sell to large institutions — such as school districts and universities — and the creation of two new student-run vegetable gardens at UCLA that will be used to educate others about the benefits of a campus garden. A raised bed garden is scheduled to be built at Hershey Hall this winter, with an amphitheater garden to be installed at the Sunset Canyon Recreation Center in the spring.

“I want to congratulate the inaugural class of Global Food Initiative student fellows,” said UC President Janet Napolitano in a statement. “These are outstanding students who are passionate about this important global topic and will be able to make valuable contributions to this initiative through these fellowships. I’m looking forward to seeing the results of their projects.”

As a member of Mentors for Academic and Peer Support, one of 29 organizations operated through the UCLA Community Programs Office, Alas, along with two other UCLA students, is making a short documentary to tell the story of the Jordan High students and that of other urban gardeners in L.A.

“We chose to work on urban gardening because we believe that it strongly connects with current issues regarding health, food access and social justice throughout L.A.,” said Alas.

Alas’ documentary will also feature a weekend gardener at Wattles Farm community garden in Hollywood and a Native-American woman who incorporates her ancestral beliefs into a gardening class she teaches at the Autry Museum’s Southwest Museum. In the next phase of production, Alas plans to allow the Jordan High students to shoot their own footage as they turn neighborhood blight into a neighborhood asset.

“We want to put the camera into the students’ hands and have them take ownership,” Alas said. “We want them to tell the story of their own community.”

Health, food access and social justice are also at the root of the documentary being produced by Moreno and her team of four. The film, which draws attention to the relationship between food advertising and childhood obesity, follows single mother Stefani Gilmore as she tries to feed her family of six nutritionally, using the federal Special Supplement Nutrition Program for Women, Infants and Children (WIC).

Moreno’s team hopes to raise awareness of the issues faced by low-income and single parents and help motivate policymakers tighten up restrictions on advertising that markets food to children.

“I know what it’s like to be constrained monetarily and nutritionally,"` said Moreno. “It surprises me that more people are not aware of the realities faced by people in their own neighborhoods.” It’s not true that poor people eat fast food because they’re lazy and don’t want to cook for themselves, she said.

“They eat fast food because it’s the cheapest thing they can afford, and it’s readily available,” Moreno said. “When you’re working more than 40 hours a week, or not working at all, and taking care of a large family, you don’t have that much time to think about what’s for dinner. You’re just trying to survive.”