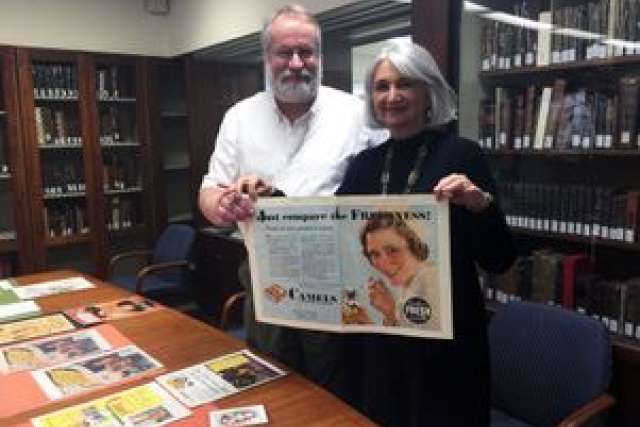 Linda Sarna, interim dean of the UCLA School of Nursing, and Russell Johnson, curator at the biomedical library, hold an old advertisement showing a nurse smoking Camels and touting the cigarette's freshness. Sarna donated the ad and other materials to the library's collection.

Once upon a time, tobacco-related diseases were extremely rare. However, all that changed in the 20th century after the first advertising campaign rolled out, making smoking a socially acceptable and even glamorous activity.

It was romantic and sexy. Everybody smoked. Celebrities. Sports figures. Even health care professionals. In 1943, a smiling Navy nurse lighting the cigarette of an apparently wounded, but smiling soldier graced the cover of Saturday Evening Post.

You could light up on an airplane or in a theater. Ashtrays were a standard item in most living rooms, and smokers often found holiday-themed cartons of cigarettes under the tree. Even as recently as five years ago, smoking was quite prevalent in major movies.

For a generation of UCLA students who never knew tobacco's golden age, seeing cigarette advertisements and other historic artifacts of this era as well as learning about how the tobacco industry completely misled the public about the dangers of smoking is a real eye-opener.

Laura Perry/UCLA
Students in a Fiat Lux class look at historic artifacts that promoted smoking and campaigned against it.

A new Fiat Lux course at UCLA, “Breathe Well: Tobacco-Free UCLA Medicine, Nursing and Public Health,” is familiarizing students with this bygone era of acceptance of the cigarette and how a nationwide anti-smoking campaign turned America against smoking.

“We wanted students to understand that, even though there has been a long history of anti-smoking actions, there was a time when the tobacco industry had been successful in using glamour, celebrity and even health care professionals to carry their pro-smoking message,” said Linda Sarna, interim dean at the UCLA School of Nursing and co-chair of the Tobacco-Free Steering Committee at UCLA, along with Dr. Michael Ong.

Through the Fiat Lux class, Sarna and Ong, associate professor of medicine, address the bigger issue of tobacco control and encourage students to be change agents. By having the students understand the history of tobacco use and the role that the tobacco industry played, they can, in effect, “know the enemy” and know how to take on the issue, using the past as a platform, Sarna said.

The culture of smoking

Because advertising played a major role in creating a culture of tobacco acceptance, the Fiat Lux students recently visited the rare book room at the UCLA Louise M. Darling Biomedical Library to see a hands-on historical exhibit of anti- and pro-smoking materials organized and curated by Russell Johnson, curator of the history of medicine and sciences.

In the 1930s-40s, physicians and nurses joined celebrities and sports stars to promote cigarettes. By using these trusted health care professionals, tobacco companies attempted to diminish concerns about smoking and health.

“Perhaps the most interesting item —and my personal favorite — was an article from Life Magazine in 1939 that described how Florence E. Linden, a registered nurse and ex-actress, lectured women on the etiquette of smoking,” said Sarna. Photos showed women the “wrong” and “right” ways to smoke and handle cigarettes. Interestingly, this same issue showed UCLA students celebrating homecoming on the cover.

In another magazine, a two-page spread featured a nurse smoking Camels and touting the freshness of the cigarettes. Students perused an ad for Lucky Strike bragged that “20,679 physicians say Luckies (sic) are less irritating.”

Students saw for the first time ads of the 1970s that used a tagline that was certainly memorable to their parents’ and grandparents’ generation: “You’ve come a long way, baby” to promote Virginia Slims.

“In 2014, a report from the Surgeon General on the health consequences of smoking pointed out that the tobacco epidemic was initiated and sustained by the aggressive strategies of the tobacco industry,” related Sarna, “which deliberately misled the public on the risks of smoking.”

The genesis of the anti-smoking movement

While the current non-smoking movement  got its momentum following the release of the U.S. surgeon general’s report in 1964 on the dangers of smoking, anti-tobacco efforts can be traced all the way back to the 1600s.

Some of the materials on display at the library originated with the Anti-Cigarette League of America, founded in the 1890s, that kicked off a campaign for banning smoking in public places. As a result, strong public support resulted in 15 states enacting laws banning the sale, manufacture, possession and use of cigarettes; 22 other states were considering adopting the legislation.

The league’s influence, however, weakened during World War I when Army doctors and military officials claimed tobacco calmed the weary soldier, sedated the wounded and distracted the bored. By 1927, all states had repealed their cigarette-prohibition laws and smoking bans.

The fight isn't over

While tobacco policies have been developed to create smoke-free environments — UCLA went tobacco-free in 2013 — the fight against smoking is far from over as long as people are still dying  and suffering from smoking-related causes, students in the Fiat Lux class learned:

So, asked Sarna, what can be learned from looking at the past?

While cigarettes may be passe and smoking them makes you a pariah in some places, the use of e-cigarettes and hookah are on the rise, students learned. Their marketing campaigns are taking a page right from the pages of the tobacco industry, Ong said.

“Sex. Being cool. Making health claims. All sorts of similar parallels,” he said. "But instead of colorful newspaper and magazine ads or 30-second TV spots, marketing is now done through social media."

Student Sean Ezenwugo said the class gave him a new perspective. "The biggest lesson I learned came from being in the presence of the professors. They were not only instructors, but also role models of what a tobacco-free life can look like: optimistic, realistic, well-informed, and driven to make a change."

The biomedical library’s collection of smoking advertisements can viewed by using its online request system. Find out more about the Great American Smokeout.