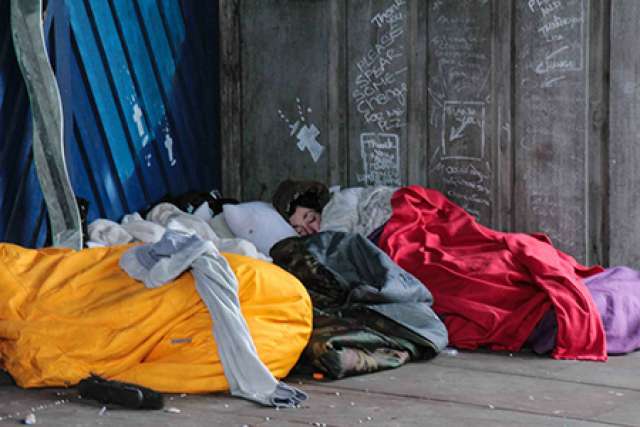 A report released today finds that physical and mental health care needs as well as abuse and traumatic experiences are major contributing factors to a loss of housing for unsheltered people, especially unsheltered women. A research team at the California Policy Lab analyzed survey responses from more than 64,000 single adults ages 25 and older who were experiencing sheltered or unsheltered homelessness in 15 states across the U.S. from 2015 through 2017.

It is estimated that more than half a million people are homeless on a given night in the United States, nearly 200,000 of whom are unsheltered — sleeping on sidewalks, in parks, in cars, or in other outdoor locations. The analysis finds that people who are unsheltered are far more likely to report having chronic health conditions, mental health issues, and experiences with trauma and substance abuse as compared to homeless people who are living in shelters. Further, people with the longest periods of homelessness and the most significant health conditions are not accessing and being served by emergency shelters. Rather than being sheltered or housed and receiving appropriate care, they are instead regularly engaged by police and emergency responders.

"People experiencing homelessness face a number of challenges related to their health and well-being, but this new analysis suggests that people who are unsheltered are far more likely to encounter these problems and that the problems are exacerbated the longer they are unsheltered," said Janey Rountree, executive director of the California Policy Lab at UCLA. "These issues were the most profound for unsheltered women, especially experiences with abuse and trauma."

In the study, 50% of unsheltered people reported that they suffer from a combination of a physical health condition, a mental health issue and a substance abuse condition — what researchers call a state of trimorbidity. That's more than 25 times the number of sheltered individuals who reported this (2%).

While individuals who are sheltered report on average fewer health and mental health conditions, the data does not support a finding that shelter is the cause of improved health. In fact, it is just as likely that people who are unsheltered for long periods of time are those who cannot access shelter for a variety of reasons. The findings do reinforce the importance of stable housing as a social determinant of health and as essential for ending homelessness, for people in both groups.

"It's clear that unsheltered homelessness is a housing issue and a health care issue," said Nan Roman, president and CEO of the National Alliance to End Homelessness. "It is imperative that policy and investment focus on getting these extraordinarily vulnerable people immediately off the streets and, with the help of supportive temporary shelter if needed, into safe, permanent homes where they can be connected to the health and other services they need."

Unsheltered people were more than four times as likely as sheltered people to report that physical health conditions contributed to loss of housing — 46% compared to 11%.

Significant numbers of both unsheltered and sheltered people reported that abuse and trauma led to a loss of housing — 46% and 34%, respectively.

While a majority of the homeless in the populations that California Policy Lab analyzed were men (81% of the unsheltered homeless surveyed and 77% of sheltered), almost all the issues scrutinized were more acute for homeless women.