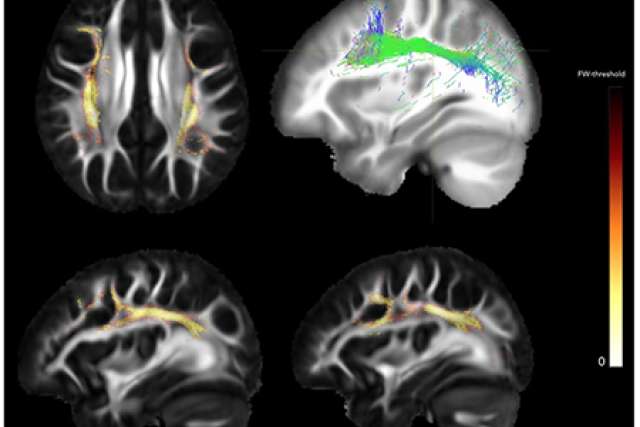 An international study led by researchers from the Jane and Terry Semel Institute for Neuroscience and Human Behavior at UCLA has found that people who are born with a genetic disease that greatly increases the risk of developing schizophrenia have distinctive defects and deficiencies in the white matter of their brains. Researchers compared the brains of people with the genetic disorder, 22q11.2 deletion syndrome, to the brains of healthy people and to the brains of people with the disease who do not have schizophrenia.

The brain's white matter connects different regions of the brain and allows neurons to communicate with each other. The paper also reports that abnormalities in white matter could help explain why people with 22q11.2 deletion syndrome have difficulties organizing their thoughts.

22q11.2 deletion syndrome is caused by the absence of a small piece of chromosome 22, at a location called q11.2, near the middle of the chromosome. Children with the syndrome have an increased risk for attention deficit hyperactivity disorder and autism spectrum disorder. They also have up to a 20 times higher risk of developing mental illnesses such as schizophrenia during adolescence and young adulthood.

The understanding of the genes in the 22q11.2 region gives researchers an insight into how schizophrenia and other psychiatric disorders could develop, both among people with the 22q11.2 deletion and others.

Researchers at UCLA and 10 other institutions used a type of imaging called diffusion tensor imaging to compare white matter differences in the brains of 334 people with 22q11.2 deletion syndrome and 260 people without the syndrome. Because researchers used the same methodology to analyze the imaging data, they were able to accurately pool data across the 11 sites that participated in the study.

By analyzing a group of more than 500 people — nearly 10 times the size of any previous study of 22q11.2 deletion syndrome — the study represents a major step to clarify specific brain abnormalities caused by the syndrome, and it provides researchers with clear areas to target when investigating treatment options.

The study is published online in Molecular Psychiatry.