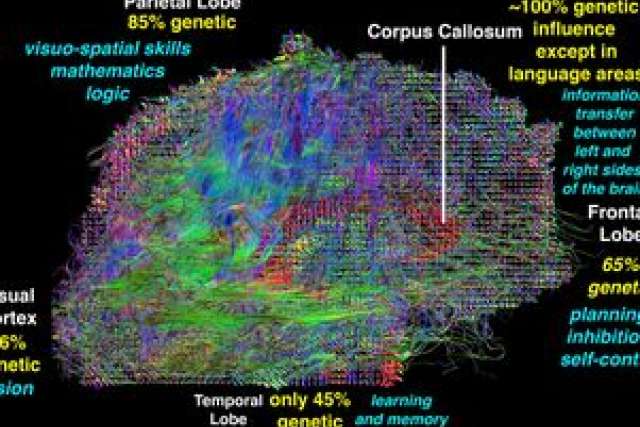 In a study published in the Journal of Neuroscience Feb. 18, UCLA neurology professor Paul Thompson and colleagues used a new type of brain-imaging scanner to show that intelligence is strongly influenced by the quality of the brain's axons, or wiring that sends signals throughout the brain. The faster the signaling, the faster the brain processes information. And since the integrity of the brain's wiring is influenced by genes, the genes we inherit play a far greater role in intelligence than was previously thought.

Genes appear to influence intelligence by determining how well nerve axons are encased in myelin — the fatty sheath of "insulation" that coats our axons and allows for fast signaling bursts in our brains. The thicker the myelin, the faster the nerve impulses.

Thompson and his colleagues scanned the brains of 23 sets of identical twins and 23 sets of fraternal twins. Since identical twins share the same genes while fraternal twins share about half their genes, the researchers were able to compare each group to show that myelin integrity was determined genetically in many parts of the brain that are key for intelligence. These include the parietal lobes, which are responsible for spatial reasoning, visual processing and logic, and the corpus callosum, which pulls together information from both sides of the body.

The researchers used a faster version of a type of scanner called a HARDI (high-angular resolution diffusion imaging) — think of an MRI machine on steroids — that takes scans of the brain at a much higher resolution than a standard MRI. While an MRI scan shows the volume of different tissues in the brain by measuring the amount of water present, HARDI tracks how water diffuses through the brain's white matter — a way to measure the quality of its myelin.

"HARDI measures water diffusion," said Thompson, who is also a member of the UCLA Laboratory of Neuro-Imaging. "If the water diffuses rapidly in a specific direction, it tells us that the brain has very fast connections. If it diffuses more broadly, that's an indication of slower signaling, and lower intelligence."

"So it gives us a picture of one's mental speed," he said.

Because the myelination of brain circuits follows an inverted U-shaped trajectory, peaking in middle age and then slowly beginning to decline, Thompson believes identifying the genes that promote high-integrity myelin is critical to forestalling brain diseases like multiple sclerosis and autism, which have been linked to the breakdown of myelin.

"The whole point of this research," Thompson said, "is to give us insight into brain diseases."

He said his team has already narrowed down the number of gene candidates that may influence myelin growth.

And could this someday lead to a therapy that could make us smarter, enhancing our intelligence?

"It's a long way off but within the realm of the possible," Thompson said.

Graphics from the study can be found at www.loni.ucla.edu/~thompson/HARDI/PDF/hardi3.jpg.

The UCLA Department of Neurology encompasses more than a dozen research, clinical and teaching programs. These programs cover brain mapping and neuroimaging, movement disorders, Alzheimer's disease, multiple sclerosis, neurogenetics, nerve and muscle disorders, epilepsy, neuro-oncology, neurotology, neuropsychology, headaches and migraines, neurorehabilitation, and neurovascular disorders. The department ranked No. 1 in 2005 and 2006 among its peers nationwide in National Institutes of Health funding.