Teens extend help to family of girl with liver cancer 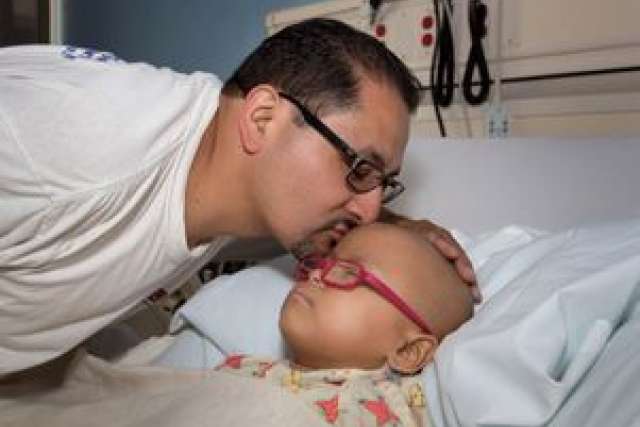 Things seemed to be going well at first. But sadly, less than a year later, Vicky was diagnosed with recurrent cancer in her new liver.

To eradicate some liver tumors that remained unaffected by the chemotherapy, the 4-year-old underwent chemotherapy and stereotactic body radiation therapy (SBRT), a newer radiation treatment that noninvasively focuses high doses of radiation to kill tumors in a few treatment sessions.

The Mezquitas were juggling treatment appointments and caring for their other children when they lost crucial supplemental funding they had used to pay for nursing care for Vicky. Piling onto the family’s troubles, a utility-sparked fire that occurred about the time of Vicky’s transplant destroyed their backyard, including all the fencing and landscaping, leaving the children no safe place to play. Because of Vicky’s need for intense care following the transplant, no repairs were ever made, said her mother Myra Mezquita.

Fortunately, some Westside teens who raise money to help sick children through a charity they cofounded, Teamwork Makes the Dream Work, found out about the family’s plight. Guided by the organization's motto, “Aiming to do good wherever good can be done,” they held their annual garage sale and raised more than $5,100 for Vicky’s family, money that will help them augment her nursing care and create a new backyard for Vicky and her siblings to enjoy.

“We went all over the Westside, from Santa Monica to West Hollywood, gathering donations for the garage sale,” group member Nahal Shakib, 19, of Pacific Palisades said. “It was really important to us to raise a lot of money.”

Shakib and three members from Brentwood — Jasmine Shaouli, 18; Leila Aframian, 17; and Devon Shalom, 17 — recently presented a check to David Mezquita, who was visiting his daughter while she was in Reagan UCLA Medical Center because of a low white blood cell count caused by the chemotherapy. The teens also brought gifts for Vicky’s siblings as well.

Dr. Julie Kang, a resident in the Department of Radiation Oncology, was able to connect the teens with the Mezquita family through a mutual friend. Kang was there when the check and gifts were presented to the family, along with Vicky’s radiation oncologist, Dr. Percy Lee, who oversaw the radiation treatments, and nurse Adriana Grandpre-Aguiar, who assisted with her care.

“It takes a lot of help to make good things happen,” the grateful father said. “I’m very happy and pleased that everyone joined together as a team to make this happen. I’m very touched.”

Myra Mezquita said that, at times, the circumstances her family is dealing with are “beyond imaginable. I can’t express the magnitude of our gratitude for the support we received from everyone.”

Lee, an associate professor of radiation oncology and director of UCLA’s SBRT program, said he was pleased they were able to treat all the visible cancer with the new radiation therapy. “This little girl has been through a lot in the last four years, and we are hopeful that the treatments give her a fighting chance,” he said.

Lee added that he was glad the family was getting some financial assistance. Even with their money woes, he said, the Mezquita family had recently given him a thoughtful gift card to pay for his lunch at a local eatery.

Kang said it was difficult watching the Mezquitas guide their child through a second bout of liver cancer.

“Parents can sometimes feel so alone in this big battle,” she said. “It’s beyond amazing that these angels came out of nowhere to help them out.”