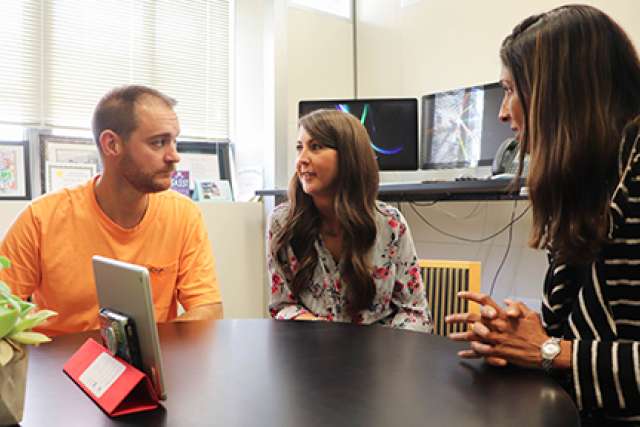 Mary and Brandon Crawford and their young son, John, have been participating in a UCLA research study from their home nearly 1,500 miles away in Arkansas.

John, 3, was diagnosed with a condition known as tuberous sclerosis, a genetic disorder in which tumors form in several organs including the brain, eyes, heart, kidney and skin. The disorder is strongly associated with a number of developmental conditions, including autism, intellectual disability and delays in childhood development.

"We've been studying early markers of autism in a variety of groups, and one of the genetic diagnoses we really have focused on is tuberous sclerosis," said Shafali Jeste, MD, a pediatric neurologist and an associate professor of psychiatry, neurology and pediatrics in the David Geffen School of Medicine at UCLA. "About 50 percent of these infants develop autism."

"We know that early intervention is effective," Jeste added, "and if you can start helping babies and toddler with their development before they're diagnosed with autism, they are likely to have better outcomes."

For families of children with developmental disorders, access to early intervention programs can make a major difference in their overall development. However, many families in smaller cities or rural areas lack convenient access to such programs, which often are located at larger medical centers in big cities.

To address that need, researchers at UCLA's Center for Autism Research and Treatment, or CART, are leading a federally funded study that uses telemedicine to remotely help families learn skills that let them work at home with their children to gain essential social skills. The study involves children diagnosed with tuberous sclerosis. Scientists found early signs of autism in this group of infants who, until now, might not have received crucial early intervention.

Children with tuberous sclerosis often have multiple medical issues their families are coping with. For these families, travel to a distant study site can be prohibitively time-consuming and expensive. So researchers at CART overhauled their study methods to develop a way of delivering their training remotely.

In the trial, parents who been trained in the technique by UCLA therapists record videos of play sessions at home with their children. Each week, families review the videos with the therapist via video conferences and discuss their child’s development needs. The families, who have come from across the country, including Kansas, Nevada and North Carolina, will visit the two study sites six times during the study, which runs from 15 to 21 months. The study is expected to conclude in 2022.

The Crawfords, who have participated in the study both remotely and in person at study sites at UCLA, Boston Children's Hospital and Massachusetts General Hospital, have been pleased with their son's progress.

"We've seen huge improvements in John's language skills and his ability to interact and tell us what he wants and how he's feeling," Mary Crawford said. "Seeing that growth and advancement makes our hearts soar because, as parents, we want to do whatever we can to help our son. This trial empowers us to do that, even if we are thousands of miles away from the therapists we're working with."

Using the remote teleconferencing "allows families to begin that early intervention from their home, which is really important for those who live far away from major academic research centers," said Jeste, the principal investigator in the CART study.

The therapy used in the study, called JASPER, is a science-backed technique developed at UCLA that uses play-based therapy to enhance children’s development and behavior.

"We do a very careful assessment of where children are, developmentally, and then train parents to implement this method into their everyday interactions," said Connie Kasari, PhD, professor of human development and psychology and a co-founder of CART at UCLA's Semel Institute for Neuroscience and Human Behavior.

The use of remote technology has expanded the number of families that can take advantage of the type of therapy offered at UCLA, Jeste noted.

"We are really expanding our reach beyond those families who might have the resources to be able to come to centers of excellence, such as UCLA's program," Jeste said. "That is incredibly important because autism and genetic syndromes are both non-discriminating."