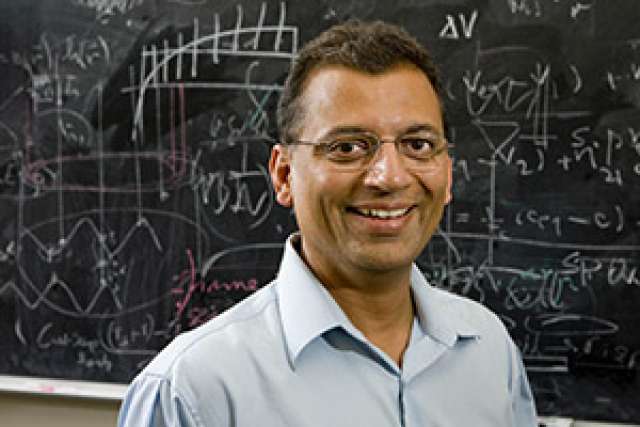 UCLA researchers have found that space-mapping neurons – the GPS system in the brain - have a strong dependence on what is being looked at when triangulating location, a finding that resolves a neurological mystery that has vexed scientists for more than four decades.

This also expands on an earlier finding that neurons responsible for creating spatial maps react differently in virtual reality than they do in the real-world environments. Researchers again used rats in a virtual reality environment to test the long-debated theory of whether landmarks are necessary or whether that region of the brain is also counting steps or directional movement to determine location, said Mayank Mehta, a UCLA professor of neurology, physics and astronomy, and neurobiology in the UCLA College and the study’s senior author.

The study, which appears today in the peer-reviewed journal Cell, showed that many neurons were firing selectively only when rats were looking at certain landmarks on screens, either in the real or in the virtual reality environment.

“This part of the brain, the hippocampus, has neurons that fire in specific places. If I’m walking around a room, some neurons fire near the door, others around the middle of the room, and they all form a map of space in the brain,” said Mehta, who also is director of the W.M. Keck Center for Neurophysics at UCLA. “Where does this map come from? The classic idea was there are two possible mechanisms. One hypothesis is that neurons triangulate distances with respect to visual landmarks. However, it was commonly believed that hippocampal neural responses do not depend on which landmark the rat was looking at, a long standing paradox. The other idea is that neurons are keeping track of the distances traveled by the subject, through the so called path-integration, though not directly tested.”

Surprisingly, the team found that the neurons did signal for what landmark the rat was looking at, thus removing the 45 year old paradox about whether the landmarks exert a causal influence on hippocampal directional responses. Further, careful experiments using virtual reality showed that the neural responses were neither abstract representations of space, as commonly thought, nor vestibular input driven path-integration signals. Instead, these responses were causally and predictably governed by visual landmarks.

This study is a part of series of studies undertaken by the Mehta laboratory to understand how the brain rapidly makes memories, including spatial maps, on the fly. They have been using Virtual Reality to manipulate the perception of space and time. Using this technique they have recently shown that in more than half of the neurons in hippocampus shut down in virtual reality. They also showed that the brain in the virtual world does not create a spatial map like it does in the real world environment, a finding that was replicated in this study, that could have implications for people who use virtual reality for gaming, military, commercial, scientific or other purposes.

The scientists were studying the hippocampus, a region of the brain that is critical for learning and memory and involved in diseases such as Alzheimer’s, stroke, schizophrenia, depression, epilepsy and post-traumatic stress disorder. The hippocampus also plays an important role in forming new memories and creating mental maps of space.

Researchers created a sophisticated virtual reality environment for rats that cost nearly $1 million to develop. They placed a small harness around rats and put them on a treadmill-like device surrounded by a “virtual world” on large video screens in an otherwise dark, quiet room.

The rats walk in the virtual room in a similar way as they would in a real room, Mehta said.

Because no mental map was being made, part of the brain was not working in virtual reality. Could there be long-term implications for that as more and more people use virtual reality?

“This could have important implications. This part of the brain that makes maps of space is also involved in making memories, like what did I have for lunch, what was I doing on 9/11? It is, in that sense, what makes us human,” Mehta said. “If people are spending time in virtual reality, could that alter the way the brain works? If it’s not making maps, will the making of memories be affected? Everything in the brain influences what the brain will do later on. It’s the reason we are different at age 40 than we were at age four. The brain remembered everything that happened and modified itself because of it. Now what will happen when people’s neural responses become different in virtual reality?”

Mehta said the findings, although found in rodents, are equally applicable to humans.

The study was funded by the National Institutes of Health (NIH) and the W. M. Keck Foundation. More information about Mehta lab research can be found at www.physics.ucla.edu/~mayank/.