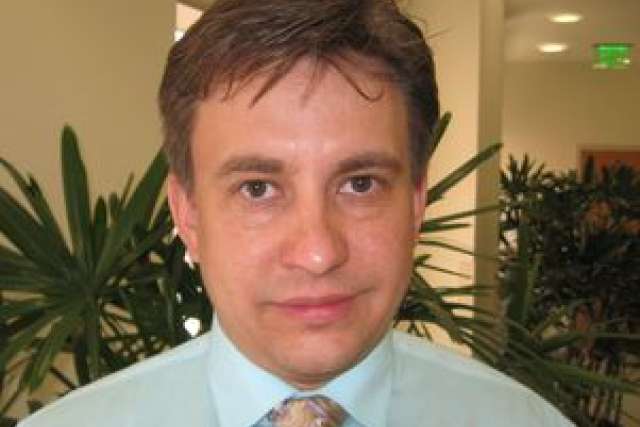 As a boy growing up in Soviet Russia, Denis Evseenko was drawn to the wonders of scientific discovery. Though closed off from many of the resources of the Western world at the time, it was a country that housed its own wealth of scientific institutions and provided a fertile and supportive environment for his inquisitive young mind.

Early in his medical training Dr. Evseenko decided to focus entirely on research into embryonic stem cells, specifically the genesis of mesodermal tissues — a broad definition that includes blood, muscle, bone and cartilage. He was excited about the possibilities inherent in cutting-edge science, but also aware of the often complicated path of translational science. He knew if he were to take the next step, he had to do things differently.

“I had a noble vision to develop progressive therapies for the patient,” he said. “It was a very practical vision too, because I realized how limited therapeutic opportunities could be for the basic scientist, and I had seen many great potential discoveries die out before they ever reached the clinic. Could I help to create the bridge between stem cells, research and actual therapeutics?”

From the moment he first arrived at UCLA a little over three years ago, Dr. Evseenko has done just that. He is investigating how regenerative stem cells fundamentally connect, relate and correlate to cancer, and he’s developing new stem cell-based treatments for patients with arthritis as well as ligament and tendon injuries.

He has built his laboratory upon the foundational bedrock of cross-collaboration among researchers, clinicians and the cutting-edge resources unique to UCLA. It is precisely the challenge of taking science “from bench to bedside” that fuels his passion for medicine.

Discovering the possibilities of stem cells

In 2004, he left Russia to study at the prestigious Liggins Institute at the University of Auckland in New Zealand. It was an exciting time for stem cell research, in which he found his niche.

A chance meeting with renowned stem cell scientist Dr. Gay Crooks led to an invitation to join the stem cell research lab that she was developing halfway around the world at UCLA in Southern California. Although he was newly married and had a young daughter, it was exactly the opportunity the young researcher was looking for.

“California is probably as far away from Russia as you can probably get in terms of weather, but I was always interested in the possibilities there,” said Evseenko, laughing. “Gay’s lab was focused on hematopoietic stem cells,” the cells that become blood cells. “We shared a passion for fundamental questions of human development and therapeutics, and how it could be possible to use stem cell science to create new organs and tissues.”

He spent five years learning from Dr. Crooks and her colleagues, discovering different ways to control mesodermal cells and creating progressive models to understand their origins and development. His aim was to create improved and more targeted treatments.

“Over the years, people would often ask me, 'Will it be possible to one day make bones and cartilage from stem cells?’” Evseenko said. “It’s a big problem, particularly cartilage — it degrades as we age and can become debilitating to our daily lives. It remains one of the major problems in medicine that has no answer.”

Although rarely life-threatening, degenerative conditions of the joints and cartilage affect millions of sufferers, regardless of age, and impair their activity. Since there is no cure, current drug treatments focus on managing pain and improving quality of life. As the condition worsens, artificial joint replacement is common, but costly and invasive; artificial joints typically last around 15 years. With joint replacement costs projected to multiply sevenfold in coming years, it is a looming financial burden for the health care industry.

“When I first arrived at UCLA, I immediately knew I wanted to build the architecture to facilitate the entire cycle here to treat these degenerative conditions,” said Evseenko. He was invited to join UCLA’s Jonsson Comprehensive Cancer Center and Broad Stem Cell Research Center. He quickly contacted orthopedic surgeons to gauge interest in progressive therapies and talked with scientists in biomechanics who were leveraging top-notch robotic facilities at UCLA.

“I told them that although we could not do basic science, our lab could help with clinical application of therapies and to create new models and protocols,” Evseenko said. “We could truly build the entire supply line.”

Dr. Evseenko’s bold vision of translational science is already blazing new trails in research of regenerative stem cells and their relationship to cancer. Cellular differentiation is the process by which a less specialized cell becomes a more specialized cell type. In cancer, cells can revert to a state that is akin to blast cells (cells that are immature and undifferentiated), resulting in unwanted and uncontrolled cell division. Regenerative stem cells are similar in their ability to reproduce like cancer cells, such as when stem cells reproduce to repair tissue. But there is a big difference. Stem cells are subsequently able to “put on the brakes” and stop replicating after reparation is complete.

Dr. Evseenko and his colleagues are particularly interested in the mechanisms of rejuvenation that make cancer cells younger and “blast-like” and how these processes are fundamentally related to adult stem cells and the regeneration of specific tissues.

His lab is currently investigating potential correlations between how human cartilage forms in early stages of human fetal development, specifically from five to 12 weeks. “If you look at cells at five weeks, they are like cancer cells in that they have already developed networks to expand and grow and are dividing like crazy,” said Dr. Evseenko. “Joints that, at five weeks, are two millimeters in size will have grown to one centimeter in size by 12 weeks. A few more weeks after that, they will have tripled in size. This growth is lost postnatal, but in the fetus, these mechanisms are highly active.”

Dr. Evseenko’s lab is examining these mechanistic links and analyzing the developmental data, applying it to sarcoma and other stem cells in cancers that they can then target for potential future treatments.

As a member of the Broad Center for Stem Cell Research, he is also investigating the potential of using human pluripotent stem cells to grow cartilage. By identifying and characterizing how these stem cells form in early human development, he and his colleagues can overcome significant obstacles that prevent them from using these cells to generate new tissue for transplantation. By working to understand these processes, Evseenko and his colleagues can illuminate the way for potential new treatments, including alternatives to joint replacement.

Dr. Evseenko represents a new paradigm of scientists who are harnessing the regenerative power of stem cells to blaze new trails in medicine and cancer treatment, say officials at the Jonsson Comprehensive Cancer Center. His lab is funded by the National Institute of Health, Department of Defense, California Institute of Regenerative Medicine, Arthritis Research National Foundation and UCLA Broad Stem Cell Research Center.

“It’s my hope that we can translate the research we do and discoveries we make here to the clinic to directly impact patient care,” he said.

This story was adapted from a longer version running on the Jonsson Comprehensive Cancer Center website.