To heal the human instrument 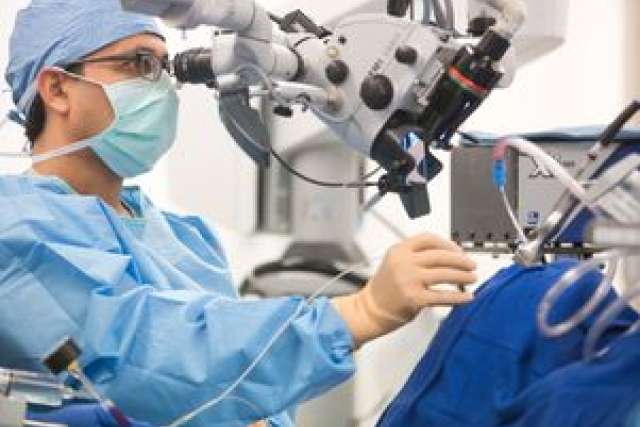 Laurence, who was in his mid-40s at the time, had struggled for about 20 years with a mild case of spasmodic dysphonia (SD), intermittently losing his voice at odd times. It’s a neurological disorder that involves spasms of the vocal cords, which cause the voice to break up or have a strained or strangled quality.

“Work demands and trying to speak a new language aggravated all my vocal problems,” Laurence said. “It came to a head at a meeting where I was called on to speak to about 250 people. My voice was horrible, cracking and missing words. I wanted to crawl away and hide.”

Laurence, who was trained as an engineer, methodically scoured the latest medical research and took a week’s vacation in New York to confer with specialists. That’s when he learned about otolaryngologist Dr. Gerald Berke, chair of the Department of Head and Neck Surgery and founder of UCLA’s Voice Center for Medicine and the Arts. He performs a specialized surgery that severs the nerve pathway between the brain and vocal cord and grafts a new nerve from the neck. It essentially rewires the larynx.

For patients who have baffling problems with talking, breathing, singing or swallowing, the UCLA Voice Center for Medicine and the Arts can be an oasis in a desert of inconclusive tests, endless doctors’ appointments and despair. “Your voice is how you express yourself to others,” said Berke, an international authority on the physiology of the larynx. “If it’s compromised, it impairs your personality and how you interact with the world, which can be overwhelmingly frustrating.”

In addition to patients like Laurence, world-class singers such as Celine Dion and John Mayer have asked Dr. Berke for help with their ailing vocal instruments and then gone public in support of his work. “Through his medical care, I learned that the voice is an instrument ... and nobody sees that as delicately and carefully as Dr. Berke and his colleagues at UCLA,” Mayer told an audience last January  at a fundraising gala for the Department of Head and Neck Surgery.

The Voice Center for Medicine and the Arts is known for novel treatments for such disorders as vocal-cord paralysis, airway stenosis and the SD surgery that Laurence underwent. In-office laser therapy, digital-video endoscopes and minimally invasive approaches are used to treat myriad complex and common disorders of the larynx and trachea. Dr. Berke started the center in 2004 with Bruce Gerratt, a speech and language pathologist, and Dr. Dinesh Chhetri, an otolaryngologist who specializes in swallowing disorders. The younger generation of physicians at the center now includes otolaryngologists Dr. Jennifer Long and Dr. Abie Mendelsohn.

Located in the larynx, the vocal cords consist of loose tissue that vibrates in a wave-like manner at 80-to-300 cycles a second when air from the lungs is pushed through them.  “It’s amazing that when we are talking, our vocal cords are robust enough to bang together about 100 times a second, without stress or strain,” Dr. Berke said.

The cords are operated by specialized muscles that have exceptionally fine control. As we talk louder, the folds are closed longer and are pressed together more firmly. To manipulate the pitch of our voice, we automatically tighten the cords to make our voice higher or loosen them to make our voice lower. “It works in the same fashion as letting the air out of a blown-up balloon,” Dr. Berke said. If you pull the neck of the balloon, it changes the sound coming out.

What makes each of our voices unique is the size of the cords we are born with, combined with the way we modulate sound through our throat, mouth, tongue and lips. Superstar tenor Pavarotti, for instance, had massive vocal cords that could push large amounts of air through at high pressure. “We learn how to control our voices as infants,” Dr. Berke said. “A baby making seemingly meaningless baby talk is probably the child first experiencing how its voice works.”

But to this day, the actual mechanism that causes vocal cords to vibrate is not very well understood. “Because the cords are down low in the throat and they vibrate so fast, it has been hard to study and measure the process until recently,” said Dr. Berke. Only in the last 20 to 25 years have researchers had instruments that can examine the cords in detail and study the wave as it occurs over the cords, he said. The good news is that recent information about how the voice works has transformed what doctors at the voice center can diagnose and treat today.

While disease can contribute significantly to voice issues, that is not always the cause. Because the voice operates more or less on automatic pilot, we sometimes unknowingly put extra strain on our vocal folds.

That damage can show up years later. In fact, the center is seeing an “epidemic” of voice issues in people who survived the 1960s era of sex, drugs and rock ’n’ roll. Now in their 60s, 70s and 80s, people are being seen with throat cancers and other problems tied to the common sexually transmitted human papilloma virus (HPV), apparently contracted from risky behaviors in their free-wheeling youth. According to the Centers for Disease Control and Prevention, about 8,400 people in the U.S. each year are diagnosed with cancers of the back of the throat that may be caused by earlier HPV infections.

We also can overburden our voices by talking a lot when we have a cold, by smoking or yelling. Like an overworked muscle, the vocal cords can get tired and stiff and prone to injury. The result can be calluses, nodules, ulcers and other painful damage to our cords.

Singer Harley Jay was convinced he had overtaxed his voice while performing the lead role in the play “Rent” for two years at the rate of eight shows over six days each week. “It got to where we had to hide containers of water all over the stage because I’d have to keep sipping water to be able to get any notes out,” he recalled.

Later, his voice became “impossible,” he said. “Sometimes my voice would crackle and crack and make horrendous sounds, or I’d open my mouth to sing and no sound would come out.” An examination by Dr. Berke showed that Jay had cysts and a hemorrhage, which meant he had to stop talking entirely for four weeks until the hemorrhage cleared up. Only then could the cysts be surgically removed.

In 2013, Jay underwent a three-hour operation. Six more weeks of silence — not even a whisper — followed until he was allowed to talk, but he couldn’t sing for another four weeks. When the time finally arrived for him to sing again, he said, “I immediately scheduled a voice lesson and the results were so good that I hopped in my car and sang really hard.”

Now at age 31, Jay said he sounds better than he did when he was 20. “Since the surgery, my voice is not quite as gravelly, which [is a sound that] many rock singers may like. But, hey, I can sing like this for six hours a day.”

This story has been adapted from one posted by U Magazine. You can read the complete story here.