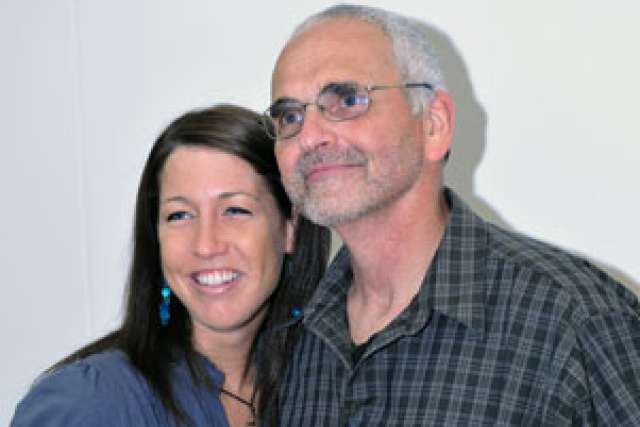 Harry Damon, the firefighter from Grand Rapids, Mich., and Nicole Lanstrum, who was born and raised in rural Iowa, initiated two kidney transplant chains last week at Ronald Reagan UCLA Medical Center that freed at least six kidney patients — four at UCLA and two in San Francisco — from lives on dialysis. And because their generosity helped initiate similar chains at other transplant centers, the lives of many others will be restored.

A "donor chain" creates opportunities for endless donor-recipient pairings. It starts with an altruistic donor — someone who wants to donate a kidney out of the goodness of his or her heart. That kidney is transplanted into a recipient who had a donor willing to give a kidney but whose kidney was not a match. To keep the chain going, the incompatible donor gives a kidney to another patient, unknown to him or her, who has been identified as a match, essentially "paying it forward." A specialized computer program matches donors and recipients across the country.

Because kidneys can remain outside the body for 24 to 48 hours between removal and transplant, these chains enable donors to give kidneys to strangers of various races and ethnicities across the country.

Nearly 80,000 people are on the kidney transplant waiting list in the United States, according to the United Network for Organ Sharing. California alone has more than 16,000 people on the list.

To mark the generous organ donations from Damon and Lanstrum, the chains have been named the Nick Damon Transplant Chain, in honor of Harry Damon's deceased son, and the Service Before Self Transplant Chain, reflecting one of the three core values of the U.S. Air Force.

One transplant chain took place on Monday, June 8, and the second on Tuesday, June 9. The two chains will continue at California Pacific Medical Center in San Francisco and at the University of California, San Francisco, where still more renal failure patients will have life-changing transplants.

The donors and recipients from the UCLA chain met as a group for the first time June 15. Damon, whose son died three years ago, had been working with the National Kidney Registry to find someone who needed a kidney.

Damon was eventually matched with patient Sheila Whitney of Compton, Calif., who has been on dialysis for more than six years and whose son, Reginal Griffin, couldn't donate to his mother because she was highly sensitized — that is, she developed strong antibodies to her son's blood during her pregnancy, a common occurrence.

Reginal Griffin, a Long Beach, Calif., resident who is roughly the same age as Nick Damon was when the latter died, instead donated his kidney to Keenan Cheung, a father of three from La Canada, Calif., whose wife, Jeanne, has an incompatible blood type and was ruled out as a donor to her husband. With the gift from Reginal, Keenan ends four-and-a-half years of dialysis.

This gift freed Jeanne, who juggles family and a part-time job, to donate to Sonia Valencia, a resource teacher who lives in Commerce, Calif., and has been on dialysis for six years. Sonia was initially set to receive a kidney from her friend Celia Contreras, a kindergarten teacher from Pico Rivera, Calif., but they, too, had incompatible blood types.

As a result, Celia's "left-over" kidney went to California Pacific Medical Center to a recipient whose brother will then serve as the bridge donor kicking off another chain in a few weeks.

Nicole Lanstrum, whose gift initiated the June 9 chain, had wanted to donate a kidney since high school in Clarion, Iowa — just a few miles from her hometown of Dows — and had sought out the National Kidney Registry for this purpose.

Lanstrum, who has never known anyone on dialysis, is hoping that her donation will inspire others in the military to do the same.

"I just feel we're all put on this earth to make it better and no one has the same game plan," said Lanstrum, who is stationed in Tucson, Ariz. "I think this is something that God supports me in."

Lanstrum's kidney went to Valinda Jones, a registered nurse from Woodland Hills, Calif., who was to have received a donation from a friend in Indiana who is also a nurse and prefers to remain unnamed. That match didn't work out because of incompatibility.

The Indiana nurse's kidney was instead shipped to UCSF for transplantation into a woman whose sister will serve as the bridge to a new chain.

At the June 15 gathering, all the exchange donors received special lapel pins in an engraved box honoring them as "Everyday Heroes."

OneLegacy, a nonprofit organ and tissue recovery organization serving the greater Los Angeles area, facilitated the chains by coordinating interstate transport of the kidneys. As coordinators of transplants from deceased donors, organizations like OneLegacy very rarely participate in the living donation process, given that the latter are coordinated in-house by the transplant centers. However, with UCLA's living donor chains involving transplant centers in different cities, OneLegacy was asked to participate by Dr. Jeffrey Veale, director of the donor exchange program and assistant professor of urology at the David Geffen School of Medicine at UCLA.

"This is a procedure we do every day with deceased donors but seldom with living donors," said Thomas Mone, CEO and executive vice president of OneLegacy. "We applied the same high standards to make sure the donation chain is a success."

Veale had nothing but praise for Damon and Lanstrum, whose generosity is improving so many lives.

"About 30 to 40 percent of the people who have a willing living donor don't match that person," Veale said. "With this innovative program we can greatly expand the donor pool."

The National Kidney Registry is a nonprofit organization with the mission of saving and improving the lives of people facing kidney failure by increasing the quality, speed and number of living donor transplants in the world. The registry matches donors and recipients using a specialized computer program developed by businessman and registry founder Garet Hil. Hil started the registry when his youngest daughter needed a transplant and tests revealed that her body would have rejected his kidney, as well as kidneys from other donors.

The UCLA Kidney and Pancreas Transplant Program performed its first kidney transplant in 1957 and for the past 50 years has continued to be a national leader in both clinical research and academic excellence. UCLA is the second-largest kidney transplant program in the country and the largest in Southern California, performing hundreds of adult and pediatric transplants each year. The program has some of the best outcomes in the country, according to the Scientific Registry of Transplant Recipients, a national database of organ transplant statistics. UCLA's program has helped pioneer the use of minimally invasive laparoscopic surgery to remove kidneys from living donors.

Learn more about the UCLA Kidney Exchange Program at www.transplants.ucla.edu/kidneyexchange.