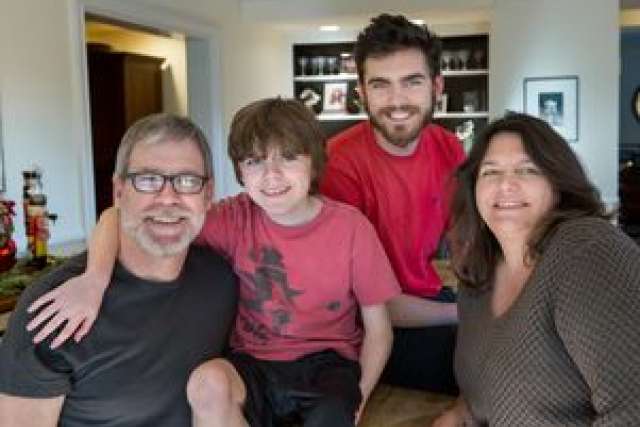 Dylan Miceli-Nelson, 12, has just gotten a new Xbox One, and it wouldn’t be wise to enter the Miceli-Nelson home these days without preparing for a game of “Just Dance 2014” or “Call of Duty: Ghosts.”

He is standing in front of a big-screen television, game controller in hand. His parents, Dr. Stanley F. Nelson, a UCLA professor of human genetics and a former pediatric oncologist, and M. Carrie Miceli, a UCLA professor of microbiology, immunology and molecular genetics, try to psyche themselves up for a game of “Just Dance.” Dylan and his brother, Calvin, a junior in college, are ready to bust a move.

“I like to dance,” said Dylan, who has a mop of thick brown hair, dimples and an irrepressibly joyful attitude. “But I don’t like to dance in public. I like pop, rock ’n’ roll — ’80s — hip hop, rap and electric.” Drs. Nelson and Miceli sigh, get up from the couch and join in the dance. There’s no way they’re getting out of it.

To say these two parents would do anything for their funny and exuberant son is an understatement. Besides dancing, Nelson and Miceli have rerouted their careers to help beat back a disease that afflicts Dylan and one of every 3,500 boys worldwide.They're engaged in a very personal fight against a lethal genetic illness. An because of their efforts, their Center for Duchenne Muscular Dystrophy (DMD) at UCLA is leading the effort to find treatments and extend lives — including that of their son.

The Center for Duchenne Muscular Dystrophy at UCLA, which the couple (above) co-directs with Melissa Spencer, recently held a celebrity poker tournament and silent auction that raised $650,000.

As a toddler, Dylan was diagnosed with DMD, the most common fatal genetic disease of childhood. Mutations in the Duchenne gene, which is on the X chromosome (thus affecting only boys), impair production of the protein dystrophin, which is required for healthy muscle function. Boys with Duchenne typically lose their ability to walk by adolescence and go on to experience respiratory and cardiac failure. Life expectancy is about 25 years of age.

But things are changing in the world of those affected by Duchenne. The first prescription medication specifically to treat the disease may be approved by the U.S. Food and Drug Administration (FDA) this year. Other novel therapies are in the works.

In Southern California, thanks to Nelson, Miceli and their colleagues at the Center for Duchenne Muscular Dystrophy, boys with Duchenne now have access to state-of-the-art care and can enroll in one of several promising clinical trials. Nelson and Miceli have not only emerged as leading scientists in the field, they also have rallied a far-reaching network of other UCLA scientists working in 13 labs on campus, students and community members to work on all aspects of the disease.

“We’ve got this team that’s very diverse,” Miceli said. “Nobody in the room has the same skill set. That’s when you get this kind of synergy of talents that really drives a field that had really been quite insular before. Now it’s a paradigm for how you take a rare disease from genetic discovery into the clinic.”

Added Nelson: “We think the Center for Duchenne Muscular Dystrophy is the right model for how you tackle rare diseases. You have to take this team-science approach and team-clinical approach, and those two things have to work well together to generate new ideas and new knowledge with an eye toward biotech.”

Among DMD researchers and clinicians nationwide, UCLA is known as a dynamic place that has achieved a lot in a short amount of time, said Jeffrey Chamberlain, the McCaw Chair in Muscular Dystrophy at the University of Washington and co-editor of Duchenne Muscular Dystrophy: Advances in Therapeutics. “Their reputation is one of being very high-quality scientists who are taking a broad approach to muscular dystrophy research,” he said. “Often at universities, you have one, two or three labs working on muscular dystrophy and being very specialized. UCLA has established a fabulous link between basic research and clinical application.”

Nelson and Miceli’s colleagues on campus agree. “Stan and Carrie helped galvanize things on campus,” said Melissa Spencer, professor of neurology and one of the few Duchenne researchers at UCLA when Dylan was diagnosed. “It has brought in people who weren’t working on Duchenne before, new ideas, new motivation. Now we have the clinical mission, research mission, education mission and community-outreach mission. The breadth of what we’re doing goes beyond the science.”

That’s where Dylan, other local boys with Duchenne and their families come in. As it turns out, love has a place in science.

“Dylan is very funny,” noted Spencer, who is co-director, with Nelson and Miceli, of the center. “He’s a character. He’s very entertaining and fun to talk to. He’s full of love, too.” Although he forbids his parents to talk shop at the dinner table, Dylan participates in several clinical trials and is good-natured about his doctor visits. In addition to aspiring to become an artist and designer of video games, toys and apps, he told his dad, “I want to be the bravest disabled guy in the world.”

Science is a rocky road

For every small success, there are seemingly endless failures. Questions overwhelm answers. Months can go by without a single sign of progress. Researchers cannot afford to get too emotionally invested in the day-to-day stuff. That's the tricky balance required of Nelson and Miceli.

Even before he was diagnosed, they suspected Dylan had the disease. His gait was unusual, and he tended to walk on his toes. Still, the diagnosis was devastating. The couple made an appointment to speak with Spencer.

“I knew at the time there was nothing to be done,” aside from giving a child steroids to help prolong the ability to walk for two or three years, Spencer said. “I prepared a notebook for them with papers on the disease. It wasn’t much, but it was all I could do. I was heartbroken for them.”

The notebook revealed that, since the gene for the disease had been discovered in 1986, important research had been completed that was poised for translation into clinical use. However, in many clinics, very little had changed to improve the boys’ quality of life or life expectancy.

“Back when Dylan was diagnosed, often the first message parents would hear in the clinic was that this is a fatal disease,” Dr. Nelson said. “Doctors would say, ‘Take your son home and love him’ — the implicit message being that the medical system had nothing to offer. But the medical system actually has quite a lot to offer. That’s what we’ve been helping to set up at UCLA.”

The Center for Duchenne Muscular Dystrophy at UCLA was established in 2006 to build a multi-departmental program for performing basic research and translating that research into clinical care. The center also worked to establish a multidisciplinary care clinic to serve for an estimated 600 Southern California boys with the disease.

With support from the center, Dr. Perry Shieh, associate professor of neurology and neuromuscular medicine, and his colleagues established the Pediatric Neuromuscular Clinic. Before the clinic’s opening, many patients traveled out of state to receive specialized care. Not so today. “It’s a fully coordinated clinic,” said Dr. Nancy Halnon, associate professor of pediatric cardiology, the center’s clinical liaison and a leading physician for Duchenne care.

“Duchenne is a complicated disease,” Halnon said. “Kids have to see multiple specialists. It’s burdensome for a family to try to arrange six different physician visits with six different specialists. Having everyone in one place is good for a matter of convenience, but it’s also good to keep track of how these kids are doing.”

The clinic offers extra services, such as psychosocial care, that helps patients and families understand and cope with the disease. Patients can also opt for enrollment in Duchenne clinical trials, the number of which has exploded in recent years.

“We’re a go-to site now,” Miceli said. “We’ve got the population. We’ve got the expertise. We didn’t have those before.”

Added Nelson, “Most patients don’t know what clinical trials are occurring in Southern California. They’re disconnected from the academic. Our goal, and our hope, is to get every single boy with Duchenne on a clinical trial and on multiple clinical trials during his life to try to move the ball forward as fast as possible.”

You can read a complete version of this story in U Magazine.