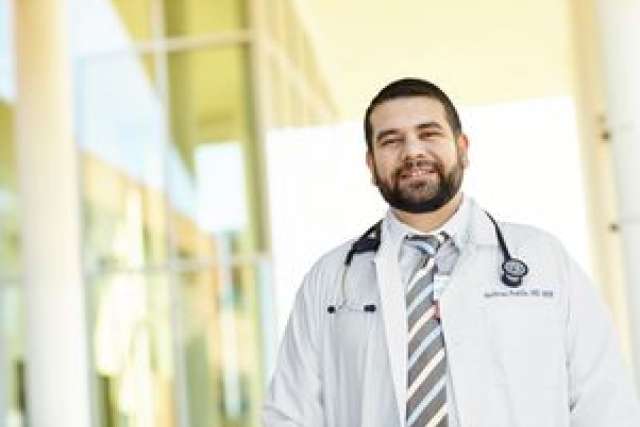 When he was 7 years old, Guillermo Padilla landed in the hospital with appendicitis. While a frightening experience for any child, it was even more so for the young boy who spoke little English. His parents — Mexican immigrants who were determined that their son learn Spanish first — had to translate for him. That made an indelible impression on the youngster.

“Being scared and not knowing much of the language made me realize after the fact that I wanted to be one of those doctors who were both comforting and able to save lives,” he says. Later, during his teen years, Padilla witnessed extended family members being too afraid to seek health care for fear of deportation or high health care costs. Those experiences, he says, further fueled his ambition to become a primary-care physician and serve underrepresented minorities, particularly in predominantly Spanish-speaking Latino communities.

Yet, even with his clear ambition, the road to medical school wasn’t easy for him. After two failed attempts to get high scores on the MCAT and lackluster grades in college because of time spent in volunteer activities, including working in a student-run health clinic, Padilla gave up his dream of medical school to work in a bakery his father managed.

But two programs and advice from a mentor helped get him back on track. He enrolled in UCLA’s Program in Medical Education (PRIME), a five-year course of study leading to joint M.D. and master’s degrees that aims to train students to work in medically disadvantaged communities, and the UCLA/Charles R. Drew University Medical Education Program.

Today, after earning an M.D. and a master’s degree in public health at UCLA, Padilla is a resident in family medicine at Sutter Santa Rosa Regional Hospital in Santa Rosa, California. After completing his residency, Dr. Padilla plans to work for a federally qualified community health center, improve the quality of care for patients and develop a mentorship program for students in his hometown near Sacramento.

As the country faces a national shortage of primary-care doctors in general and Latino physicians in particular, Dr. Padilla’s experience demonstrates how successful “emphasis” programs such as PRIME and UCLA/Drew can encourage medical students from underrepresented communities to enter fields like family medicine and help reduce health care disparities. Each year, UCLA/Drew accepts 24 students, plus an additional four applicants who are enrolled through the PRIME program.

In fact, research has shown that students who graduate from the UCLA/Drew program are more likely to practice medicine in underserved areas than those who completed the traditional UCLA curriculum, even after controlling for race and ethnicity.

The need for Latino physicians is particularly acute. A study published last year by a team that included Dr. Gloria Sanchez, associate clinical professor of medicine at the David Geffen School of Medicine at UCLA and a member of UCLA’s Center for the Study of Latino Health and Culture, indicates that while the Latino population has increased dramatically in the United States, the number of Latino physicians in relation to that population has declined.

Among the five states with the largest Latino populations — California, Texas, Florida, New York and Illinois — California’s Latino-doctor-to-patient ratio was the lowest, with 50 physicians per 100,000 people. “In California, in particular, I really believe we’re at a crisis point,” says Dr. Sanchez, the daughter of a Mexican migrant laborer.

That gap is disconcerting; research has shown that Latino patients who have limited English-language skills visit doctors less frequently than those with stronger English proficiency. That language barrier can be a high hurdle that contributes to patient discomfort and confusion. But when the physician speaks Spanish, “It’s a powerful moment when you see your patient’s face express that relief, that ‘¡O, usted habla español, que bueno! You’re going to understand me,’” Dr. Sanchez says. “Even if a patient speaks English, when you’re vulnerable and scared, you may really prefer your native tongue.”

Patients also are more likely to reveal vital details about their lives when they feel a connection to the physician. Such a connection may affect everything from medication decisions to a reduction in unnecessary trips to the ER. “It is important to know if they sleep on a couch and don’t have a home with access to refrigeration. A person’s living condition has significant implications when making choices about providing the most appropriate health care,” Dr. Sanchez says.

Another route to increasing the number of Hispanic physicians in the U.S. is to reach beyond the country’s borders. Currently, some 25 percent of the nation’s 900,000 licensed physicians have come from abroad. The representation of Latino physicians in that group, however, is relatively small. The UCLA International Medical Graduate (IMG) program aims to increase those numbers. An innovative and highly successful program, IMG enrolls foreign-trained physicians from Latin America in a program leading to licensure to practice in California.

The IMG program helps participants compete for positions in family-medicine residency training in the state, after which they are eligible for a medical license. In return, the participants are required to practice in designated underserved communities in California. So far, the program has graduated 104 bilingual and bicultural physicians, now practicing family medicine.

There are other hopeful signs. Enrollment of Latino students in the David Geffen School of Medicine at UCLA is significantly higher than the national average. “Between 2011 and 2015, we had between 12-to-15 percent Hispanic students in our medical school versus the national average of 7-to-8 percent,” says Dr. Clarence Braddock, vice dean for education at the medical school. “By using so-called holistic admissions” — a process that looks at the totality of a student’s qualifications and experiences, in addition to metrics such as grades and MCAT scores — “we are able to achieve high rates of diversity.”

In fact, UCLA’s 2016 entering class of 175 students is among its most diverse, says Dr. Theodore Hall, associate dean for admissions: 28 percent are Asian, 25.7 percent are white, 22.3 percent are Hispanic, 16 percent are black and 2.9 percent self-identified as being from multiple underrepresented minorities, he noted.

For Dr. Padilla, the long journey to becoming a doctor has been worth it. And he plans to give back by encouraging students that they too can have a career in medicine. “Along the way, the family-medicine community helped me significantly,” he said. “Now I’m planting a seed because someone told me I can.”