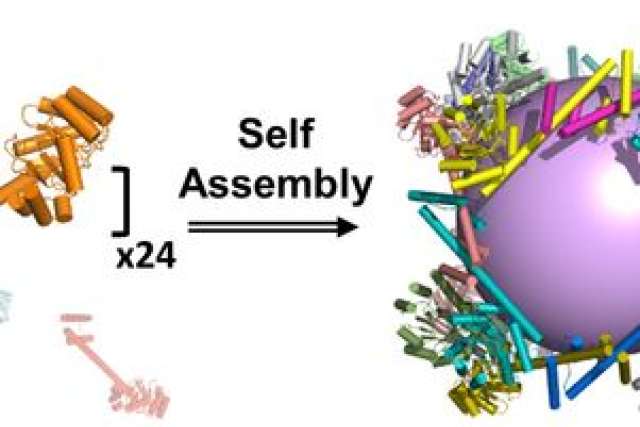 At a size hundreds of times smaller than a human cell, it also could lead to new methods of delivering pharmaceuticals inside of cells, or to the creation of new nanoscale materials.

The protein assembly, which is shaped like a cube, was constructed from 24 copies of a protein designed in the laboratory of Todd Yeates, a UCLA professor of chemistry and biochemistry. It is porous — more so than any other protein assembly ever created — with large openings that would enable other large protein molecules to enter and exit.

The research was recently published online in the journal Nature Chemistry and will appear in a future print edition.

Yeates, the study’s senior author, has sought to build complex protein structures that self-assemble since he first published research on self-assembling proteins in 2001. In 2012, he and colleagues produced a self-assembling molecular cage made from 12 protein pieces combined perfectly like pieces of a puzzle. Now they have done so with 24 pieces, and they are currently attempting to design a molecular cage with 60 pieces. Building each larger protein presented new scientific challenges, but the bigger sizes could potentially carry more “cargo.”

In principle, these molecular structures should be able to carry cargo that could then be released inside of cells, said Yeates, who is a member of the UCLA–Department of Energy Institute of Genomics and Proteomics and the California NanoSystems Institute at UCLA.

Yeates’ research was funded by the National Science Foundation and the UCLA–DOE Institute of Genomics and Proteomics. The lead author was Yen-Ting Lai, who conducted the research as a UCLA graduate student in Yeates’ laboratory and is now a postdoctoral scholar at Arizona State University.

The molecular cube is probably too porous to serve as a container — for medicine, for example — inside a human body. “But the design principles for making a cage that is more closed would be the same,” Yeates said, adding that there are ways to make the cage less stable when it gets into a cell, so that it would release its cargo, such as a toxin that could kill a cancer cell.

Yeates said that his lab’s method also could lead to the production of synthetic vaccines that would mimic what a cell sees when it’s infected by a virus. The vaccines would provoke a strong response from the body’s immune system and perhaps provide better protection from diseases than traditional vaccines.

Other co-authors of the Nature Chemistry research were Carol Robinson, Eamonn Reading and Arthur Laganowsky of the University of Oxford; Francisco Asturias and Kuang-Lei Tsai of the Scripps Research Institute; and John Tainer and Greg Hura of the Lawrence Berkeley National Laboratory.