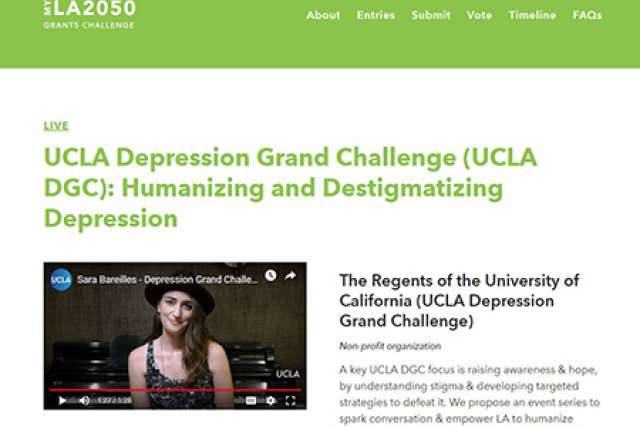 When "Game of Thrones" star Sophie Turner recently spoke about her years of battling severe depression, it once again shed light on both the prevalence and stigma of a problem that affects more than 300 million people worldwide.

A UCLA-led project aiming to address that stigma is competing for $100,000 in funding from the Goldhirsh Foundation, a Los Angeles nonprofit. The foundation's My LA 2050 Grants Challenge will distribute a total of $1 million to 10 organizations that are working to make Los Angeles the best place to play, connect, live, create and learn by 2050.

UCLA's project, "Humanizing and Destigmatizing Depression," is a part of the UCLA Depression Grand Challenge, a campuswide effort UCLA launched in 2015 to reduce the burden of depression worldwide. The grand challenge involves more than 100 researchers from 25 academic departments who are developing better understanding of depression and improved methods for prevention and treatment. One of its key goals is to develop targeted strategies to defeat the stigma associated with depression by raising awareness and fostering hope.

The initiative competing for the LA 2050 grant would feature six regional events in Los Angeles designed "to spark conversation and empower Los Angeles to humanize depression." Those discussions would in turn fuel digital media campaigns that would be disseminated throughout and beyond Los Angeles.

"We aim to inspire members of Los Angeles communities to broadly share their experiences to help put more relatable faces on those living with depression and the people close to them," said Michelle Popowitz, UCLA's assistant vice chancellor for research and executive director of UCLA Grand Challenges.

To help secure votes for UCLA's entry, the Grand Challenges team is using social media, reaching out to friends and family, and doing one-on-one outreach around campus to share information about the effort and ask for their votes.

Online voting continues through April 29 and the 10 winners will be announced on June 4, 2019. To vote for the UCLA project, visit the Humanizing and Destigmatizing Depression page on the My LA2050 Grants Challenge website and click the "vote for this proposal" button. And to help spread the word, share the following message on social media: "I just voted for @UCLAThinkGrand's #MYLA2050 Grants Challenge proposal to destigmatize and humanize depression. Join me and vote for UCLA's @LA2050 proposal at http://bit.ly/UCLADGC-MyLA2050!"