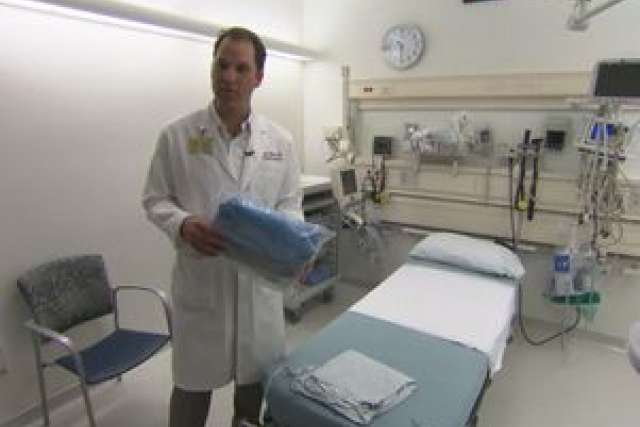 UCLA infectious disease specialists have assembled kits containing special protective gear to be used in the event that a patient infected with Ebola or other infectious diseases arrives at the emergency room for treatment.

Doctors began putting the kits together in July after the Centers for Disease Control issued new guidelines for U.S. hospitals in the face of the unprecedented spread of Ebola in West Africa. Four American aid workers who contracted the disease are now being treated at two U.S. hospitals. More are expected to arrive stateside for treatment. The World Health Organization (WHO) estimates that more than 240 health care workers have become infected by Ebola so far, and more than 120 have died.

Ebola presents special challenges for hospitals because it is transmitted through body fluids, and hospital workers are at high risk of infection from a sick patient, according to Dr. Zachary Rubin, infection disease expert at the UCLA David Geffen School of Medicine.

The Ebola kit contains full-body protective gear that covers health care workers from head to toe. Each kit holds a fluid-resistant gown, disposable booties that extend to the knee and a full-face shield that protects the health care worker’s eyes, ear, nose and mouth from any kind of splashes of body fluids from the patient.

A total of 50 Ebola kits are now at the ready, 25 at Ronald Reagan UCLA Medical Center, and 25 at UCLA Health - Santa Monica Medical Center.

“We’re going to keep them in central supply, so that we can use them fairly quickly if we need to,” Rubin said. “We’re ready for potential patients.”

UCLA is also equipped with negative-pressure isolation rooms where Ebola patients can be treated without any exposure to others.

“The air supply doesn’t communicate with any other rooms in the hospital,” said Rubin. “Any kind of equipment that is used for those patients really needs to be dedicated to that patient alone.”

The WHO estimates there are more than 3,700 suspected, probable and confirmed Ebola cases in Guinea, Liberia, Sierra Leone and Nigeria.