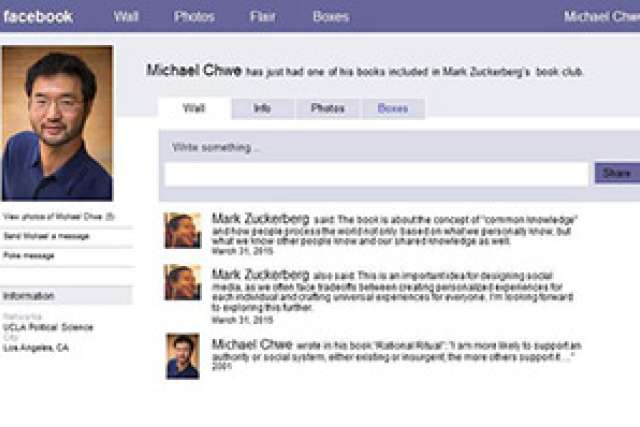 When Facebook’s Mark Zuckerberg chose my book “Rational Ritual” last week for his “A Year of Books” book club, I was surprised. “Rational Ritual” came out in 2001, and has somehow slowly made its way out of the backwaters of course syllabi into the elevated spheres of technology companies. This is gratifying to me, because even though it is a scholarly book published by a university press, “Rational Ritual” is essentially a popularization.

When I was a graduate student in economics in the late 1980s, most people considered common knowledge as an idea of only theoretical interest. People who thought about collective action (and its flip side, political repression) were mostly interested in the problem of free riding, rather than how people communicate. But social change isn’t just about tackling incentives to free ride – it’s also a problem of coordination.

In a coordination problem, each individual is reluctant to participate, but wants to join in if enough other people do. This means that there are different “equilibria” — or self reinforcing outcomes — where people might rationally end up. Imagine that there are millions of people, each of whom individually wants to participate in a march — but only as long as a million other people march, too. In this situation, we might end up in an equilibrium where no one marches — because no one else is marching, and everyone’s expectations reinforce each other. It is also possible that we end up in an equilibrium where everyone marches, because everyone is already marching, again creating self reinforcing expectations.

You can make this argument mathematically, but it is really common sense migrated a long way. What started as a rarefied philosophical and mathematical idea is now a useful organizing concept for one of our youngest and most rapidly-changing enterprises.

Facebook’s recognition of the importance of common knowledge is especially appropriate because social media platforms, such as Facebook and Twitter, are now prime common knowledge generators. My co-authors Kim Yi Dionne, Darin DeWitt, Michael Stone, and I surveyed 876 out of the roughly half-million participants in the May 1, 2006 immigration rights marches in Los Angeles, and found that only 19 percent found out about the rally through the Internet. However, Twitter was launched, and Facebook opened to the public in 2006, making it much easier for someone thinking about going to a march to know that others know about it.

The concept of common knowledge is being applied to many new issues; there seem to be nails everywhere. In a new book, “The Expressive Powers of Law,” legal scholar Richard McAdams argues that a surprisingly strong reason for why people obey laws is simply because other people are obeying them. Thus laws change behavior not just because of sanctions but because they create common knowledge of what is considered acceptable.

The concept of common knowledge is helpful in stopping violence against women. According to political scientist Gerry Mackie, the practice of footbinding in China persisted because if everyone else bound their daughters’ feet, your daughter would have great difficulty getting married if you didn’t also bind her feet. Footbinding ended when anti-footbinding societies had their members publicly pledge to not bind their daughters’ feet and also not allow their sons to marry women with bound feet. This pledge helped make the new norm common knowledge. Footbinding, which lasted over 1,000 years, fell apart in a single generation. Mackie finds that campaigns against female genital cutting today which try to persuade people individually that it is wrong are generally ineffective; what works is organizing entire collections of villages to coordinate all together in ceremonies to publicly abandon it.

Perpetrators of sexual assault often assault multiple people. Each survivor often feels isolated and alone. Each survivor knows that the perpetrator is a criminal, but no survivor knows that anyone else knows; there is an absence of common knowledge. The nonprofit organization Sexual Health Innovations is developing a Web-based reporting system called Callisto that allows survivors to upload evidence of an assault and automatically forward evidence to authorities if another person uploads evidence about the same perpetrator. This way a person can upload evidence knowing that he will not be the sole accuser. Callisto aggregates evidence about an assailant which otherwise would be dispersed among several survivors who are all unaware of each other.

In partnership with the UNESCO office in Mexico, Eric Arias, a graduate student in political science at NYU, measured the effects of an anti-violence audio soap opera program in San Bartolome Quialana, a rural community in Oaxaca. Arias found that when a person listened to the soap opera on a CD player in his own home, it did not have a significant effect on his attitudes about violence against women. However, when the program was played over the village loudspeaker, or in community meetings, it did have an effect. In other words, the soap opera seemed to be effective only when it was common knowledge, when each person knew that other people heard it.

Among the seven books Mark Zuckerberg has announced in “A Year of Books” so far, “Rational Ritual” is by far the shortest, at only 152 pages. When I wrote “Rational Ritual,” I worried that it was too short, but in retrospect, perhaps lean ideas travel more easily. I hope that other people find the concept of common knowledge useful as it continues to get ever more popular attention.