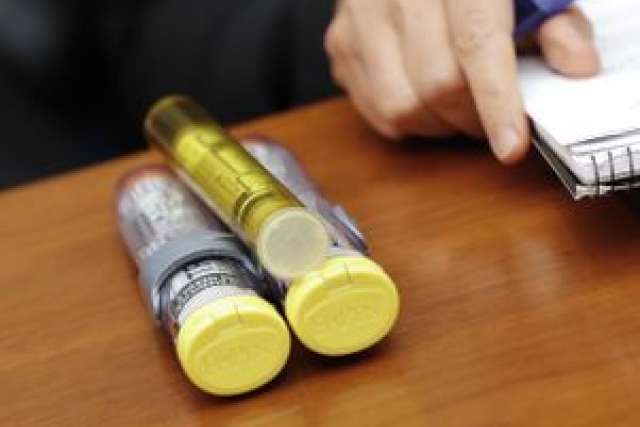 Dr. Jonathan Fielding is distinguished professor of public health and pediatrics at UCLA. This op-ed appeared in U.S. News and World Report.

Whenever I am outside, I carry two EpiPens. If a bee stings me, the pens could save my life. I was recently stung, but not by a bee. The sting came from Mylan pharmaceuticals when it raised the retail price of a two pack of EpiPens from about $100 to more than $600 dollars over nine years. According to Money magazine, each EpiPen costs about $30 to produce.

I am lucky because my health insurance pays most of the cost of my EpiPens. But millions of Americans, both young and old, cannot benefit from this drug or others when the initial price or rapid price increase make them unaffordable. Even those with insurance coverage who do not use costly drugs still pay for them through rising premiums and co-pays.

List prices for all medicines are subject to various discounts and rebates often negotiated by insurance companies and pharmacy benefit managers, and the actual cost can be lower. But a study by Bloomberg found that even after discounts, we pay more in the U.S. for common medicines like Crestor (high cholesterol), Lantus (insulin), Advair (asthma), Januvia (diabetes), Humira (rheumatoid arthritis) and Herceptin (breast cancer) than in most other countries in the study, including Australia, Canada, Japan, Saudi Arabia, China, Brazil, India, Russia, Morocco and several European countries.

The role of intermediaries like insurance companies and pharmacy benefit managers in our health care system makes it very difficult for doctors and patients to know the true price of medicine.

But it is not hard to know the public health implications. In 2014, 35 million Americans did not fill a doctor's prescription because they could not afford it, according to a study released by The Commonwealth Fund. In addition, the Centers for Disease Control and Prevention reports that Americans use a variety of other strategies to trim medication costs, including reducing the dosage to make a supply last longer, buying medicines from foreign countries and substituting alternative therapies. WebMD reports that medicines sold in Canada can cost 55 percent less than an identical medicine in the U.S.

According to the American Heart Association, failure to take a prescribed medicine or reducing the amount costs $300 billion in extra medical expenses and contributes to 125,000 deaths a year. As a standalone category, nonadherence would be a leading cause of death in the U.S., ahead of Alzheimer’s, diabetes, influenza, pneumonia and kidney disease.

Why are common but essential medicine prices so expensive? There are two obvious reasons. First, unlike other high-income countries, regulation of prescription medicines in the U.S. is limited to the demonstration of safety and efficacy, not price and value. Second, there is no government control or oversight on prices. In fact government policies buffer pharmaceutical companies from real price competition.

Drug companies seeking to maximize profits are not the only culprits. Ironically our Congress, a group that often excoriates company CEOs for raising prices, is also part of the problem. For example, the pharmaceutical lobby persuaded Congress to prevent Medicare, the largest purchaser of most medicines, from negotiating pharmaceutical prices as part of the Affordable Care Act or to even use cost effectiveness in its coverage decisions.

CEOs of publicly traded pharmaceutical companies have clear incentives and a fiduciary responsibility to raise prices to maximize shareholder profits. And these CEOs are richly rewarded for their success. USA Today reports that in 2015, CEOs of pharmaceutical companies in the S&P 500 earned on average 71 percent more than the average for S&P 500 CEO.

Consolidation in the pharmaceutical industry also boosts prices. Mergers and acquisitions may make sense from a business perspective, but reduced competition means higher prices for brand name and generic medicines.

So much for the problem; what about solutions? The good news is that there are common sense fixes to make widely used prescription drugs more affordable.

First and foremost, Congress should allow the Medicare program to negotiate prices for prescription medicines. This will provide immediate relief to many seniors who participate in the Medicare Part D program. Seniors would benefit from negotiated prices in similar ways to patients covered under state Medicaid programs and by the Veterans Administration. Movement towards transparency in pricing could also make it easier for large health plans and drug benefit managers to get the best prices and resist rapid price increases.

Second, Congress should authorize the U.S. Food and Drug Administration, the agency that must approve new prescription drugs for the market, to consider a drug’s value and price in addition to its safety and efficacy in that process. Shouldn’t the price of a new drug reflect how its safety and efficacy compare to drugs already on the market? How does the requested price compare with existing products with similar indications for use?

And shouldn’t there be federal guidelines on prescription drug price increases? Is it fair that pharmaceutical companies, who have been granted a monopoly for many of their drugs in the form of a patent, are allowed to raise prices as much and as often as they want? We should not be surprised that the price of many prescription drugs is increasing at several times the rate of most other goods and services. Money magazine reports from May 2015 to May 2016, medicine prices increased 10 percent. Overall inflation was just 1 percent.

Finally, the FDA should aggressively implement the biosimilars provisions of the Affordable Health Care Act. Biosimilars are lower-cost, interchangeable versions of biologic drugs. The law was designed to bring biosimilars to market sooner, creating competition for medicines like Humira, Remicade, Embrel and the cancer drugs Herceptin and Avastin. Biosimilar medicines are widely used in Europe. To date only three biosimilar medicines have been approved by the FDA, two in the last three months.

These changes will be controversial. Pharmaceutical companies will strongly oppose them, arguing that they need high profits to continue to invest and innovate. But without these changes, the high price of prescription medicines will only worsen this crisis for patients and make our health care system less and less affordable.