Through a partnership, South African doctors train at UCLA then return to their home country 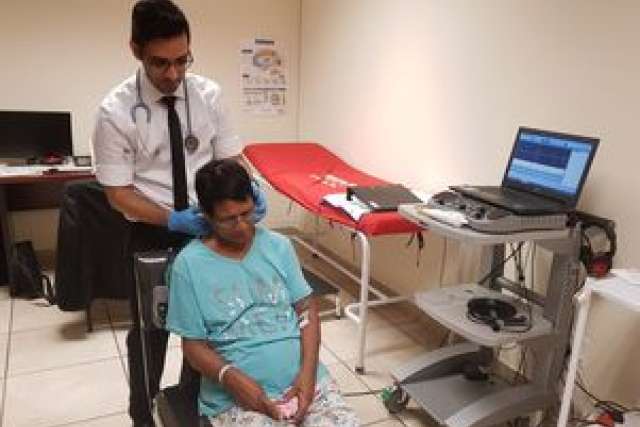 Dr. Naazim Siddi Ganie uses knowledge he learned at UCLA when he treats people in South Africa, where he grew up.

When it came to getting the best treatment for his parents' neurologic illnesses, Sam Miller and his family experienced frustration finding the right doctors in their home country of South Africa.

Miller's mother, Brenda, developed multiple sclerosis in her late 20s, and his father, Winston, was diagnosed with Parkinson's disease in his 60s.

Over the four decades of his mother's illness before her death in 2008, the increasingly acute shortage of neurologists in South Africa made the top specialists there much sought-after and overworked. They had little time to talk through treatment options, much less provide second opinions.

"It was difficult to get the time and attention from specialists, because their number had declined substantially in recent years," Miller said. "It was a discouraging exercise, and at times very distressing, not knowing where to turn. It became apparent that there were too few specialists on the neurology side and those that remained, even in treating private patients, would not entertain alternative or parallel courses of treatment."

There is a great disparity between the rich and poor in South Africa, which has a population of about 55 million, Miller said. More than half of the population lives in poverty and they rely on the public health care system, but there are not enough doctors or facilities to serve that many people.

So Miller approached the UCLA Center for World Health, which he learned about in late 2014 through Johan Klopper, the consul at the South African embassy. Working with Thomas Coates, the center’s director, the two came up with a plan to boost access to care for people with movement disorders.

The result of their two years of work was the Brenda Lucille Miller UCLA-South African Education Fund for Movement Disorders, created to honor the memory of Miller's mother. The fund aims to build South Africa's capacity to prevent, diagnose, treat or, if incurable, manage neurological diseases and movement disorders, such as multiple sclerosis, Parkinson's and amytrophic lateral sclerosis, known commonly as ALS or Lou Gehrig's disease. The aim is to benefit not only South Africa, but the entire continent.

"The fund is right in line with the mission of the UCLA Center for World Health: To transform health worldwide to create a world in which all people achieve their right to high quality, compassionate and affordable health care," Coates said.

Through the program, South African doctors apply and are chosen to come to UCLA based on previous training and their records. Once here, they shadow UCLA doctors under the guidance of Dr. Jeff Bronstein, director of the UCLA Movement Disorders Program. Under Bronstein's tutelage, the doctors learn about new treatments and information they can put into practice in South Africa. Once the doctors return to South Africa, they are considered "ambassadors" of the program there and program administrators remain in touch with them to track what they have accomplished and how the program has been beneficial to them.

The program was announced in November at an event held at the Fowler Museum at UCLA. So far two South African doctors have trained in the program.

"It's a very small start, but the hope is that this goes into successive years, and at the very least creates a ripple," Miller said. "We are looking to work with an established non-governmental organization or non-profit active in neurologic diseases or dedicated to sub-Saharan causes to expand the reach and work of the fund."

Dr. Naazim Siddi Ganie trained at UCLA from October through December. Though still in his residency training when he applied to the program, he had already passed all the necessary South African neurology board examinations.

While there has been a strong focus on diseases such as AIDS and malaria in South Africa, neurology and the population dealing with neurologic conditions have been left for the most part out of the spotlight. So with such limited resources movement disorders in South Africa frequently go untreated unless they affect daily living, Ganie said.

"I noticed this pattern quite early in my training," he said. "As such, the training of South African doctors in aspects of movement disorders can be quite limited."

Through the UCLA program, Ganie learned a "tremendous amount" about deep brain stimulation, in which electrodes are implanted in specific targets deep inside the brain and stimulated to either allow movement or inhibit unwanted movement, and who benefits from it.

"Deep brain stimulation has limitations," he said. "It can reverse or treat all movement disorders, but it cannot always reduce the burden of medication needed. It requires frequent follow-up and programming and battery checks. Furthermore, not all patients are candidates for it. It is this aspect that patients need to be prepared for, that it is a commitment and a lifestyle change in itself."

Patients should "hope for the best outcome," but not should expect miracles from it.

"This is where patient expectations and counseling come in to play," Ganie said. "We need to always paint a clear picture about what we hope to achieve with surgery and what their life will be like after surgery, even if it appears more negative than positive, so that they can make an informed decision regarding moving forward with deep brain stimulation."

Much the same holds true with movement disorders such as spasticity and tremors, which can be treated with botulinum toxin, also known as Botox.

Patients need to be carefully selected, counseled and informed prior to the Botox injection, he said.

"Most importantly they need to know what to expect as well as commit to three monthly injections, because medicinal botulinum toxin has a temporary effect," he said. "Once they agree on the treatment plan and are involved in their management, you will be less likely to have a dissatisfied or unhappy patient."

Ganie said that he's already recognized as an up-and-comer among South African neurologists because of the training. His practice recently purchased an ultrasound machine that is used to guide botulinum injections. He was also invited to the 2018 European Continuing Medical Training Advanced Deep Brain Stimulation Course in Amsterdam.

"I am still continuing my training in movement disorders and intend to pursue a PhD in a topic pertaining to deep brain stimulation in the near future," Ganie said. "I hope to remain in contact with UCLA during this period."

For more information, contact Fedra Djourabchi at the UCLA Center for World Health.