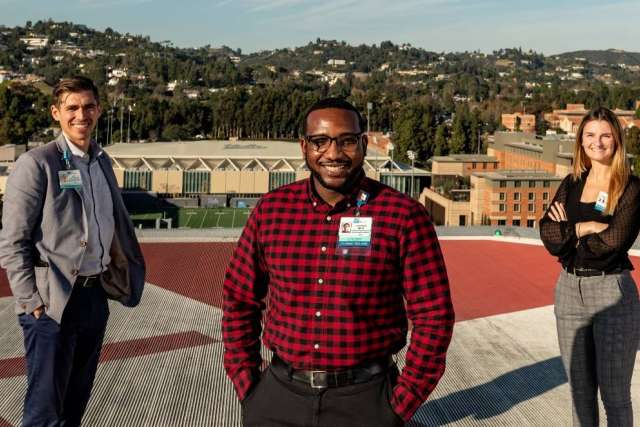 Los Angeles has an opportunity to make quite an impression as host city of Super Bowl LVI. However, hosting an event of this magnitude has its risks and challenges.

With one Level 1 trauma center within its health system, UCLA Health will play a major role in preparing for a substantial portion of that risk – the health and well-being of fans, players and the community at large.

Alex Lichtenstein, program manager of the Office of Emergency Preparedness at UCLA Health, assures that the health system is ready to respond to any emergency that may occur.

“Our role is to be prepared to respond and receive patients from any of the NFL-sanctioned events including the Super Bowl,” Lichtenstein said.

Planning for the Super Bowl began in November, according to Lichtenstein. However, the Office of Emergency Preparedness takes a “stay ready, so you don’t have to get ready” approach, says Loren Switzer, emergency management specialist at UCLA Health.

“We really maintain an all hazards approach towards preparedness across the health system on an everyday basis. So our current response is set up to absorb and to respond to any sort of event that may occur,” Switzer said.

SoFi Stadium, where the Los Angeles Rams and Cincinnati Bengals will play for the title on Sunday, sits in the heart of Inglewood. That means it falls within UCLA Health’s trauma catchment area. A hospital’s trauma catchment area is the geographic perimeter surrounding a trauma center that is strictly defined by streets/freeways or other physical landmarks.

“There is an LA County DHS policy that determines appropriate trauma patient destination with regards to the trauma center’s catchment area”,” Lichtenstein said.

With Ronald Reagan UCLA Medical Center listed as a Level 1 trauma center, UCLA Health personnel are available if patients are in need of emergency transport and the type of specialty care that we provide, for both isolated incidents and larger mass casualty events.”

Level 1 trauma centers are medical facilities that are capable of providing care for the serious injuries. These are usually facilities that have the deepest “bench” in terms of available surgical specialties and are overstocked with emergency medical supplies to be prepared for mass trauma events.

Lichtenstein said that whether an injury occurs to a player or fan at SoFi, the patient would go to the appropriate receiving facility based on the care they need. A county policy is in place outlining how patients are distributed to hospitals based on the nature of the injury.

Because the Super Bowl is such a high-profile event, it is an attractive target for terrorist activity, Lichtenstein said. The multiple festivities taking place during Super Bowl weekend also are prime locations.

Lichtenstein said the emergency preparedness team has worked through every possible scenario.

“We looked at a series of events,” said Sheridan Smith, emergency management specialist at UCLA Health. “We looked at the Pulse nightclub shooting in Orlando in 2016 and the Route 91 Harvest music festival shooting in Las Vegas from 2017.

“Those events not only had an impact on our team,” Smith said, “but on the emergency preparedness career group as a whole.”

Smith said the UCLA Health emergency preparedness team also looked at the response to the 2013 Boston Marathon bombing, as well as possible earthquake scenarios, shooting scenarios, and bombing scenarios. Protocols are in place in case any of those occur.

Regardless of the event, UCLA Health would not be alone in responding to emergency calls.

UCLA Health leaders have been in communication with multiple health systems and public safety officials in the weeks leading up to the big game.

“Some of those conversations that we’re having are dealing with family reunification procedures,” Smith said. “If there is a mass-casualty incident where a lot of patients are presenting themselves at hospitals or there are people in the ED (emergency department) looking for loved ones, UCLA Health has a family reunification plan that is in place and it includes family information center locations for both Ronald Reagan and Santa Monica UCLA Medical Center.”

Lichtenstein added that there are numerous agencies involved in the emergency preparation process and all of them play a critical role.

“It’s very collaborative and everyone has a unique role to play,” he said. “There are so many agencies involved in the process of emergency preparedness – it truly takes a whole village.

“Our big concern for Super Bowl is a mass casualty incident,” Lichtenstein said. “That can cause a significant patient surge with patients needing trauma and/or other types of specialty care. If there’s an incendiary device or some type of chemical agent used in the attack, that certainly complicates things and if there are pediatric patients it complicates matters even more.”

Ability to respond to mass-casualty events

Lichtenstein said he has complete confidence in UCLA Health’s ability to respond to emergency scenarios because of the close relationships built over the years within its own response teams and with external partners.

“We receive funding and have received funding over the years for all types of disaster response equipment and supplies that helps prepare us from a resource perspective, but the strength of what we have here is the staff and the people committed to the mission,” Lichtenstein said.

UCLA Health’s participation in the Hospital Preparedness Program requires the maintenance of medical supplies to support a significant surge of patients.

“We have 96 hours’ worth of supplies for the emergency department specifically,” said Switzer. “In addition, we have multiple medical and surgical supply carts designed to support an influx of trauma victims at both Reagan and Santa Monica facilities.”

Our medical and surgical supply cache are stockpiles of emergency supplies intended to support an unusually large patient surge. Each cache contains about ten supply carts.

Switzer said that the Materials Management Department with UCLA Health, and Logistics Section Chief within the Hospital Command Center, once activated would coordinate with the ED during disaster response to ensure they had supplies necessary to continue patient care.

Because of possible emergencies during Super Bowl week, UCLA Health is encouraging people to sign up for emergency alerts on their phones.

Switzer recommends that anyone living in the Inglewood area or planning to attend the game sign up for the “City of Inglewood Public Safety” alert. Texting “INGSB” to 888-777 will allow you to get public safety alerts on game day.

“In general, it’s good to sign up for jurisdictional alerts in your area,” Switzer said. “L.A. County has a text alert system and anyone living here should sign up for those. It’s a great best practice.”

The text alert system for L.A. County is called ‘Alert LA County.’ You can sign up by visiting lacounty.gov and following the registration prompts.

Switzer said that if there is a major threat, an emergency alert called the Wireless Emergency Alert would be issued by the City or County of Los Angeles, similar to an Amber Alert. It will go out to cellphones based on their location. She also advises people use the Citizen app, which allows people to receive reports by community members within their location.

Lichtenstein said when he first joined the emergency preparedness team, an administrator told him the 2028 Summer Olympics would be the ultimate stress test.

“It’s something that we thought about and will be thinking about. The Super Bowl is sort of a dry run for the Olympics, particularly in how we engage externally, but we have a few years to prepare.”

Lichtenstein acknowledged, however, that those “few years” will be upon us fast.

“To put it in perspective, when I looked at the Olympic website, it said we’re only a few thousand days away. It seems like a pretty small number and will be creeping upon us,” Lichtenstein said. “It is a part of the conversation and it is going to be a big one for us.”

To learn more about how UCLA Health responds to possible emergencies visit the emergency preparedness page.