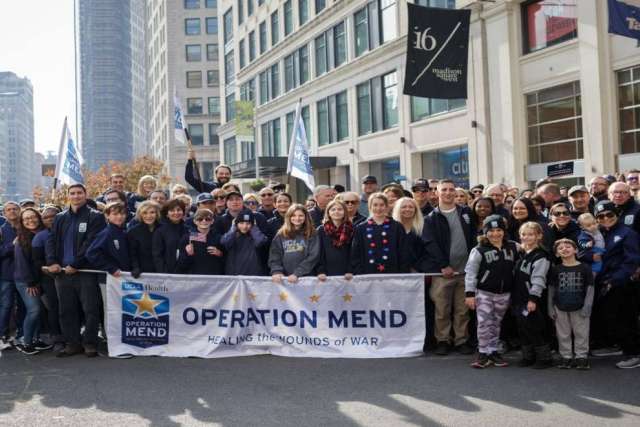 New York City’s Veterans Day Parade is returning to Fifth Avenue this year, and the wounded warriors of UCLA Health’s Operation Mend will be among the 25,000 marchers on the route.

The annual Veterans Day Parade, held remotely in 2020 because of the COVID-19 pandemic, is the longest-running parade of its kind in the country. This year’s event not only marks a return to the streets of New York City, but also the 20th anniversary of the 9/11 attacks and the withdrawal this year of American troops from Afghanistan after two decades.

Operation Mend, which was established in 2007 to deliver state-of-the-art care to severely wounded post-9/11 service members and veterans, has been a participant in the annual parade since 2011. This year’s contingent of veterans and their families is nearly 100 strong, and it includes UCLA Chancellor Gene Block and UCLA Health President Johnese Spisso.

The parade is among Operation Mend’s year-end culminating events, along with a celebratory gala. “An Evening with Operation Mend” brings together doctors, staff members, veterans and their families for an evening of inspiration and gratitude. Special guests this year include Dr. Block and Spisso, along with retired Marine Commandant James Amos, retired Gen. Pete Chiarelli, actor Clark Gregg and Los Angeles Dodgers third baseman Justin Turner. 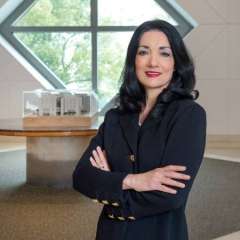 Operation Mend treats both the visible and invisible wounds of war. It was founded by philanthropist and former Ronald Reagan UCLA Medical Center board member Ronald A. Katz and his wife Maddie Katz, who were inspired to act after watching a news report about a young Marine seriously burned by an explosion while serving in Iraq. They imagined connecting wounded warriors with the nation’s top plastic surgeons.

The Marine featured in the news report, Cpl. Aaron P. Mankin, became Operation Mend’s first patient. He was riding in a 26-ton tank when an improvised explosive device ripped through it, killing six Marines and severely injuring many others, including Mankin, whose ears, nose and lips were burned away.

Mankin marched with Operation Mend in the 2019 Veterans Day Parade.

“It’s all about the people,” he said. “We come back each year, a little different, a little more healed. These types of events do my heart good.”

In addition to advanced reconstructive surgeries to restore the physical appearance of veterans severely injured in battle — more than 500 of which have been performed to date — Operation Mend helps heal the invisible scars of post-traumatic stress disorder, which affects about 40% of all veterans.

Operation Mend’s intensive treatment program is unique in its provision of PTSD counseling and services for veterans and their caregivers, said Jo Sornborger, PsyD, executive director for military medicine at UCLA Health.

The six-week program includes three weeks of treatment at UCLA. Military service members and their spouse or caregiver are brought to Los Angeles for a concentrated healing regimen that includes individual and group therapy, qigong, acupuncture, art and equine therapies and some Southern California sightseeing. The treatment continues through telemedicine and local agencies upon their return home.

“What Operation Mend provides is care,” Dr. Sornborger said. “I believe that the greatest gift we provide is time — sitting with our warriors and their family members and saying, ‘What is it like for you? How can we create a path that provides you an opportunity to remember how resilient you are and how capable you are, and then stand beside you as we’re filling in these gaps?’ And that’s what we do.”

All of Operation Mend’s surgical and psychological services are provided at no cost to military veterans and their families.

Learn more about the services provided by Operation Mend.