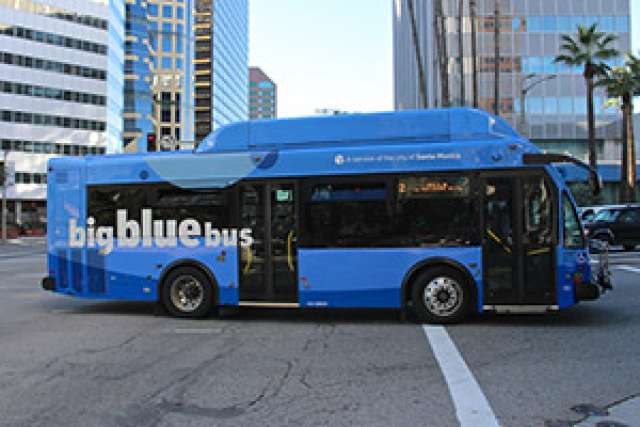 Thanks to his smartphone and apps for the Big Blue Bus and Metro Rail, the chief of staff at UCLA Health - Santa Monica Medical Center, has public transit down to a science.

When Roger Lee, M.D., leaves his downtown condo at 6 am each weekday, instead of heading to the parking garage, he takes a short, brisk walk to the Big Blue Bus station.

From there, it’s an easy 40-minute ride to 17th Street and Santa Monica Boulevard in Santa Monica – and a two-block walk to the hospital. At day’s end, he reverses the route, but opts for Metro’s new Expo Line instead. The Expo station is a block farther from the hospital, but he prefers it in the evening because of the frequency of trains – one runs every 12 minutes – and it operates until midnight on weekdays.

For a busy physician, that’s important. As co-director of the Hospitalist program for the Department of Medicine at UCLA-Santa Monica, his hours can be unpredictable – and very long.

“I started using public transportation more than a year ago because I realized that driving was exhausting and I was close to falling asleep – especially after a long day of work,” he says. “Riding the bus takes 10 to 20 minutes longer than driving, but I can relax, sleep, read or even respond to emails.” Lee frequently attends meetings at UCLA-Santa Monica’s sister hospital, Ronald Reagan UCLA Medical Center in Westwood. Being without his car at work is no problem – he simply catches the UCLA Health shuttle between campuses. If it’s a late afternoon or evening meeting, he then catches the Metro Red Bus from Westwood to his home downtown.

Lee finds knowing which bus to take and keeping track of routes and schedules easy, thanks to Smartphone apps like NextBus that show arrival times. And Google Maps allows him to enter his location and destination address, select the “public transport” option and see all available connections.

Besides being less tiring than driving, the cost of public transportation is significantly less than driving his own vehicle to and from work, he says. The open rate is $1.75 each way for Metro’s Expo line and $2.50 for the Big Blue Bus. However, thanks to a UCLA subsidy for employees, he can purchase an unlimited bus pass for $33, which covers three months. A quarterly, unlimited pass on Expo line is $150 – still a bargain compared to the cost of gasoline, parking and vehicle maintenance.

UCLA-Santa Monica operates a robust Rideshare program that rewards staff members who walk, bicycle, carpool, vanpool or take public transportation to work. In addition to the bus-pass subsidy, participants who commute to work via Expo line receive pre-loaded Tap cards. All participants also get meal tickets to the hospital’s cafeteria and are entered into monthly drawings for gift cards or funds loaded onto their Bruin cards.

Although Lee uses public transportation primarily for work, he points out that it also offers benefits for leisure activities.

“It’s a truly wonderful thing if you live downtown and want to spend a day at the beach,” he says. “Conversely, for people who live on the Westside, it’s a great way to access downtown restaurants, museums and other venues. There’s even a route that will take you to Staples Center.”

Lee chuckles as he recalls the reaction of other riders when they discover their fellow commuter is a physician. “Several members of the hospital’s nursing staff also ride the bus and Expo line and always seem surprised to see me onboard,” he says.