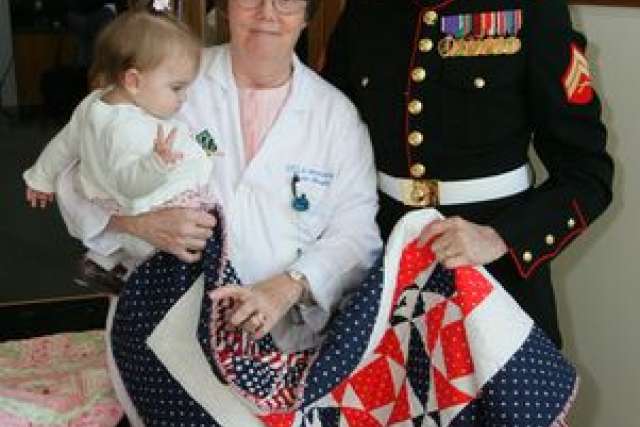 When Patti Taylor learned recently that Marine Cpl. Aaron P. Mankin, a U.S. soldier badly burned in Iraq, would be coming to UCLA Medical Center for facial reconstructive surgery, the former Army nurse's patriotic instincts kicked in. She insisted on volunteering as his case manager and rallied her quilting group to create a special gift to comfort him: a red-white-and-blue "quilt of valor."

"I've spent many years at the bedsides of soldiers. I know what happens to them when they come back," explained Taylor, a clinical nurse specialist with UCLA's liver transplant program. "I make these quilts in appreciation and respect for their service to our country - and to salute their and their families' sacrifices."

Taylor was born and raised in upstate New York, where quilting was a way of life for her Amish-Mennonite community. She learned how to sew as a child, and her family has created quilts for generations.

As a young woman, Taylor longed to become a doctor, but her traditional Mennonite father would not allow it. He envisioned her as a farmer's wife. She summoned the bravery at 17 to leave her close-knit community behind for the Army during the the Vietnam War.

She underwent military training in 1964 at Brooke Army Medical Center — the same Texas hospital from which Mankin traveled to UCLA. Her first nursing stints included serving as a combat medical specialist and as a scrub technician in the operating room. Her career took her as far as Iraq, where she helped treat the wounded during the Persian Gulf War.

Taylor left active military duty in 1993. While serving as an officer in the Army Reserve, she obtained a master's degree in nursing from the University of Washington in 1996. She earned an advanced degree in the family nurse-practitioner program at Washington's Pacific Lutheran University in 1999 and taught there as a clinical instructor from 2001 to 2002.

Now living in Southern California, Taylor meets a dozen friends each Wednesday at a local fabric shop to sew quilts for U.S. soldiers returning home. She's lost track of the number of quilts she's created for military personnel over the years but promises that every service member who comes to UCLA will receive one.

"I've been given the hands to mend and the heart to bring comfort and healing," she explained. "We're a nation at war. It will take a nation to heal."

VIDEO: To view video in Windows Media go to streaming.uclahealth.org/valorquilt