UCLA physician makes a special delivery on her honeymoon 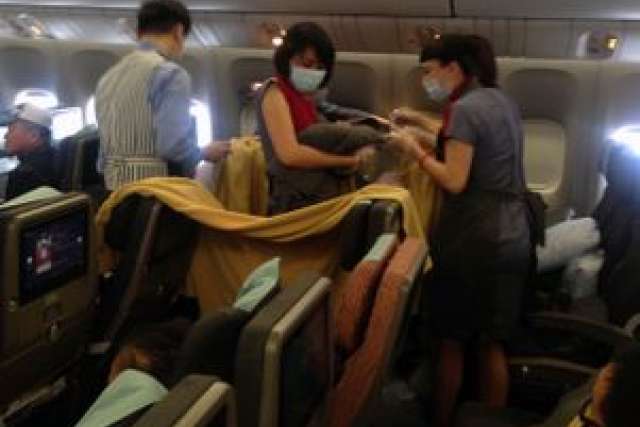 Dr. Angelica Zen’s recent honeymoon with her brand new husband, Ryan Miyakawa, will be forever memorialized in snapshots of the happy couple in Bali — and YouTube and TV news videos from all over the world because of what happened on their homebound plane 30,000 feet above the Pacific Ocean.

On Oct. 8, Zen, a UCLA resident physician in internal medicine-pediatrics, was sleeping in the main cabin about six hours into an Air China flight that left Taiwan for L.A. when she was awakened by a voice on the plane's PA system asking if a doctor was available. Still groggy, Zen volunteered that she was a doctor.

Because she looks so young, people usually look twice and sometimes brush her off, Zen said. “But this time, they said, ‘Yay! Please come up to the front to help this woman.’”

The woman, she was told by flight attendants, was having abdominal pains. “I thought, ‘Well, it could be a simple upset stomach or maybe motion sickness.’ So I went to see her, expecting it to be a simple case. But when I saw her — she was completely pregnant,” Zen recalled. “And just by the fact that she was having horrible pain every few minutes, it really seemed that she was in labor, although she didn’t realize it.”

Although Zen has helped out with deliveries before at the Ronald Reagan UCLA Medical Center as a UCLA medical student, surrounded by supervising doctors, she had never delivered a baby alone. So she was a bit nervous.

Edmund Chen
Dr. Angelica Zen (right) holds the newborn after tending to the mother for 3 1/2 hours. Passengers applauded the birth.

“Everything seemed surreal, especially since I had just woken up. I thought, ‘This is so weird.’ This is definitely not in my job description,” she said, laughing. “From the pediatric side, we’re in the delivery room if there are complications. But we’re not usually involved in the process of getting [a baby] out. So I’m very comfortable with babies, although in this case we didn’t have any of the equipment we have in the hospital.”

To give the woman more space to lie down, Zen and the flight crew moved her from her first-class pod to the middle of the main cabin where they cleared out a row of seats. Draping blankets over the seats for a makeshift tent, Zen and her team of flight attendants went to work, gathering sterilized gloves, scissors and clamps from the plane’s emergency kit. And lots of blankets and wads of paper towels.

Meanwhile, Zen's husband, Ryan, an engineer scientist who works at UC Berkeley, stood anxiously nearby, ready to Google information with his phone if she needed it, she recalled, laughing. "He was eager to be helpful," she said. But not only was the Internet down, a call to the airline’s ground medical crew wasn’t getting good reception.

While most of the passengers slept in the darkened plane unaware of what was going on, Zen, whose parents are from Taiwan, talked to the woman, traveling alone, calmly in Mandarin as flight attendants kept their flashlights trained on the two. Just 3 1/2 hours later, a healthy baby girl made her appearance to everyone’s delight, including some passengers who applauded.

“I was so relieved when the baby came out,” the medical resident said. “We didn’t have any equipment on the plane to monitor the baby’s heart rate. So I had no idea what the baby was going through. When she came out crying and looking very vigorous and pink, I was very relieved.”

“It was pretty emotional,” said passenger Willie Tipp, who was returning to L.A. from a surfing safari and was seated nearby. He was one of the applauding passengers. “I’ve never seen a baby born before. The whole time I was thinking, 'This is the kind of stuff that happens in the movies.'”  And the doctor, he said, remained calm and attentive through the whole ordeal.

Once the plane made an emergency stop in Anchorage, Alaska, and the mother and baby were taken to a hospital, the grateful flight crew moved the newlyweds to first class where Zen said she promptly fell asleep until they arrived at LAX.

Zen, who graduated from medical school at UCLA in 2012 at the top of her class, credits her excellent medicine-pediatrics training at UCLA for getting her through the incident. “I’ve had so many wonderful mentors along the way,” she said.

When Meredith McCoy Szumski, director of student affairs for David Geffen School of Medicine at UCLA, heard about Zen’s experience, “My first thought was just how lucky the patient was to have had Angelica on her flight,” she said. “We're all incredibly proud, but not at all surprised by her ability to step in and handle such a challenging situation.

“Angelica was a tremendously bright and talented medical student,” Szumski recalled. “As a student, she was incredibly well-liked and respected by faculty and peers alike for her leadership and generous spirit.”

Looking back on that flight, Zen said, “It was very stressful. It was just very unexpected. I never anticipated coming back from my honeymoon quite like that.”