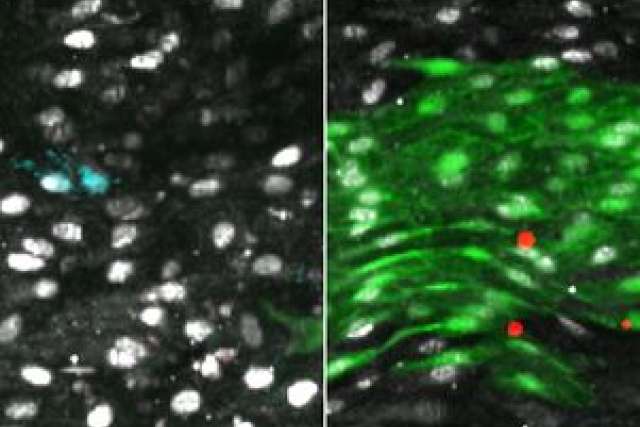 Normal wear and tear damages the blood vessel lining, which is called the endothelial lining. The body, however, has the ability to initiate molecular activity that regenerates and repairs this damage. Now, researchers at the Eli and Edythe Broad Center of Regenerative Medicine and Stem Cell Research at UCLA have for the first time followed this regeneration in progress and identified the genes and proteins responsible for spurring it. Their findings could eventually lead to novel methods to repair more severe blood vessel damage, including damage that can result from placing stents — metal or plastic mesh tubes that open blocked or narrow blood vessels.

The study, led by Luisa Iruela-Arispe, a UCLA professor of molecular, cell and developmental biology and a member of the UCLA Broad Stem Cell Research Center, was published today in the journal Cell Stem Cell.

"The well-being of the endothelial lining is really fundamental for health," Iruela-Arispe said. "Understanding how to keep this lining in good shape will help us make progress in treating multiple disease states."

In blood vessels snaking throughout the body — circulating blood to organs and extremities — the endothelial lining acts as a filter and a wall. The composition of the lining, which includes anti-clotting protein on its surface, generally prevents blood from clotting as it moves through the body, and controls what materials — such as inflammatory cells — can enter and exit the blood flow. Damaged lining can make it more likely for clots to form and inflammation to develop, leading to atherosclerosis and increasing a person's risk of heart disease.

When diseases such as atherosclerosis, a buildup of plaque in the arteries, and hypertension, or high blood pressure, make the inside of blood vessels narrower, clinicians frequently insert stents to keep the vessels open and help prevent heart attacks and strokes. When inserted, however, stents damage the surrounding endothelial lining, a problem that can lead to nearby clotting and the eventual need to replace the stent.

To understand how and when the body is capable of regenerating the endothelial lining of blood vessels, Iruela-Arispe's group modeled blood vessel damage in mice. Then, they followed the proliferation and placement of nearby cells that had been specially marked. Between 48 and 72 hours after the small vessel damage, they found increased proliferation of cells around the injury. Progenitor cells — precursors to endothelial cells — slightly up and downstream from the damage underwent increased divisions, repopulating the area both in and around the injury with new endothelial lining. Importantly, these cells were already present in the lining before any damage — they weren't a special population of stem cells that traveled from elsewhere in response to the injury.

Next, the researchers compared thousands of cells from damaged and undamaged vessels of both old and young mice. In each cell, the scientists were able to determine the genes that turned on with increasing frequency. The finding pointed them toward one key gene, called Atf3, that is required for the regeneration of the endothelial lining.

"This gene was more predominantly expressed in young animals and in cells that were involved in an injury response and regeneration," Iruela-Arispe said. "Now we need to figure out how to turn Atf3 on in tired, older progenitor cells to spur that regeneration."

A human being's vessels likely undergo slight damage on a daily basis, she said. Sitting in one position for a long time, or carrying a heavy bag on your shoulders, for instance, can slightly squeeze or compress blood vessels. But the body can respond easily to these minor injuries by increasing levels of Atf3 and, in turn, regenerating the cells around injured vessels.

"There is a point, though, when the damage is too extensive or where cells are older and aren’t responding as well," Iruela-Arispe said.

Her team is now looking closer into what genes are involved in regulating Atf3.

The research was funded by the National Institutes of Health, the Institute for Quantitative & Computational Biosciences, and the UCLA Broad Stem Cell Research Center Training Program, supported by the Rose Hills Foundation.