UCLA researchers discover more than 3,000 genes in a little-studied part of the human genome 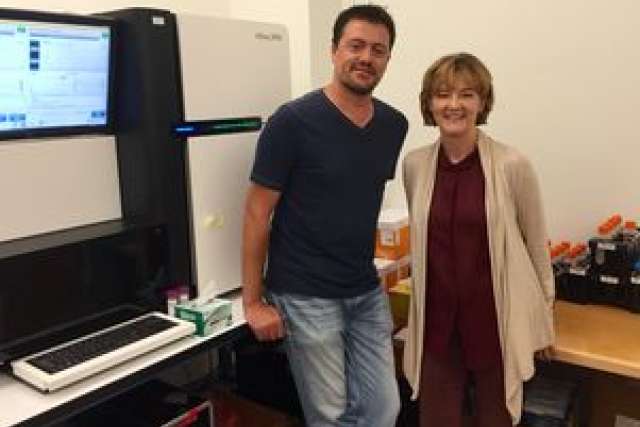 David Casero and Gay Crooks with the sequencing machine that separated the genetic information within the bone marrow and thymus gland tissue stem cells.

Scientists at the UCLA Eli and Edythe Broad Center of Regenerative Medicine and Stem Cell Research have discovered more than 3,000 previously unknown genes in a poorly understood part of the genome. These genes, found in rare cells in bone marrow and in the thymus, give scientists a new understanding of how the human immune system develops.

The findings are published today in the journal Nature Immunology.

“The genes we found are called long non-coding RNAs, or LncRNAs,” said Gay Crooks, co-director of the UCLA Broad Stem Cell Research Center, a member of the UCLA Jonsson Comprehensive Cancer Center and co-senior author of the study. “They make up much of what we used to think of as the ‘dark matter’ of our genome because, unlike the better-known messenger RNA genes, they do not produce proteins. The function of LncRNAs is not well-known but it is becoming increasingly apparent that they are not inert; they have a critical role in controlling how other genes function.”

The team isolated rare blood-forming stem cells and progenitor cells from adult human bone marrow and thymus gland tissue. They then separated the genetic information in the cells using sequencing technology. Lastly, Casero applied bioinformatics, a method that uses sophisticated software to gather and understand biological data, to identify and analyze the LncRNAs in the cells.

“Our findings are exciting because they provide a huge and unique resource for the whole immunology community,” said Casero, an assistant researcher in the UCLA department of pathology and laboratory medicine. “We will now be able to drill down on the specific LncRNA genes that seem to be most important at each stage of immune cell development and understand how they function individually and together to control the process.”

The discovery of LncRNAs is unique because they do not produce proteins, unlike the genes that have been more thoroughly researched in other studies. While the stem cells and progenitor cells the team studied make up less than 1 percent of the bone marrow and thymus, the genes they contain are critical to generating the cells of the immune system.

“If we can understand how the immune system is generated and maintained during life, we can find ways to improve production of immune cells for potential therapies after chemotherapy, radiation and bone marrow transplant, or for patients with HIV and inherited immune deficiencies,” said Crooks, who is also a professor in the pathology and laboratory medicine and the pediatrics departments in the David Geffen School of Medicine and the UCLA Children’s Discovery and Innovation Institute. “In addition, by understanding the genes that control this process we can better understand how they are changed in cancers like leukemia and lymphoma.”