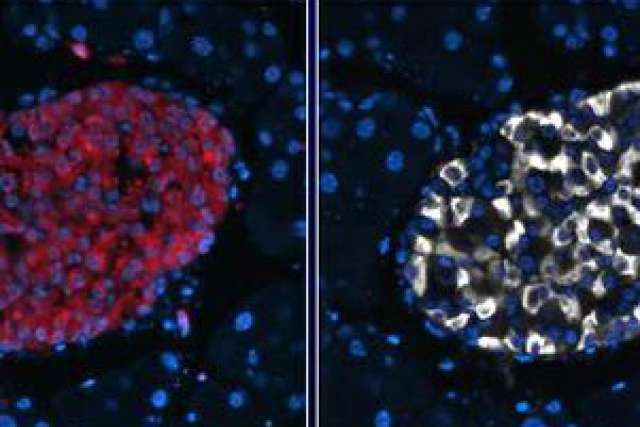 People with Type 2 diabetes have an excess of a protein called islet amyloid polypeptide, or IAPP, and the accumulation of this protein is linked to the loss of insulin-producing pancreatic beta cells.

What causes this accumulation of IAPP in pancreatic beta cells of people with diabetes has remained a mystery. But a team of researchers from the Larry L. Hillblom Islet Research Center led by Dr. Peter Butler, professor of medicine at UCLA, may have found an answer in autophagy, a process that clears damaged and toxic proteins from cell.

In a study published online July 18 in the peer-reviewed Journal of Clinical Investigation, the UCLA researchers suggest that, in people who do not have Type 2 diabetes, autophagy prevents the accumulation of toxic forms of IAPP. In people with Type 2 diabetes, the process appears to not work properly, contributing to the destruction of beta cells. As the body’s insulin producers, beta cells play a key role in maintaining healthy blood sugar levels.

"Only a few previous studies have reported that autophagy is important for beta cell function and survival," said Safia Costes, a research scientist at the Hillblom Center and the study's co-first author. "Those studies, however, were not conducted to address the role of this process in the regulation of the amyloidogenic protein, which is an important contributor to Type 2 diabetes."

To corroborate the findings, the researchers also developed a novel mouse model that was deficient for autophagy specifically in beta cells with expression of the human form of islet amyloid polypeptide. They found that mice that had beta cells in which autophagy didn't work properly showed elevated levels of toxic IAPP, which led to the death of the beta cells. As a result, those mice developed diabetes.

"The goal of our work is to understand the cellular mechanisms responsible for beta cell destruction so that we can identify the best targets for beta cell protection," Costes said. "This would aid the development of the next generation of treatments as well as combination therapies for Type 2 diabetes."

The study's other co-first author was Jacqueline Rivera, a postdoctoral fellow at the Hillblom Center. Butler was the senior author. Other authors were Tatyana Gurlo from UCLA and Charles Glabe from UC Irvine.