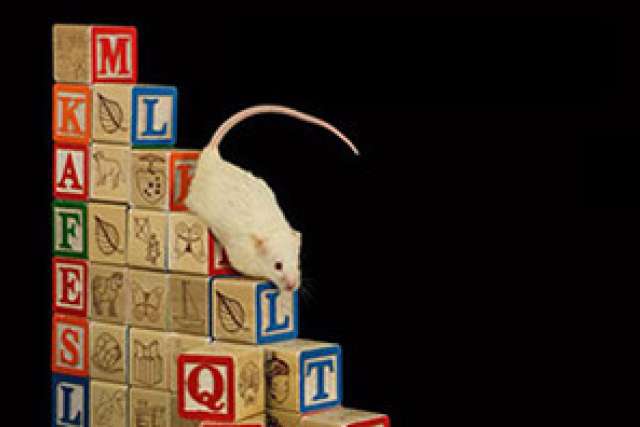 Scientists know that Huntington’s disease is caused by an inherited gene mutation. But research has yet to identify the specific mechanisms that trigger the disease and cause it to advance — and there is currently no way to prevent the disease or slow its progression.

Now, researchers at UCLA have found that removing a specific molecular switch from a mutant protein can trigger symptoms in mice that are similar to those found in people with Huntington’s disease. The finding provides further insight into how the disease evolves.

The study, led by X. William Yang, a UCLA professor of psychiatry, appears in the current online edition of the journal Neuron.

Huntington’s disease affects 1 in every 10,000 Americans while another 250,000 are at risk because they carry the inherited gene mutation. That mutation leads to an extra-long stretch of amino acids called glutamine in the huntingtin protein.

Symptoms include chorea (jerky, uncontrollable movements), dystonia (sustained involuntary muscle contractions) and an abnormal gait that can cause frequent falls. People with Huntington’s also suffer from debilitating cognitive and psychiatric deficits and they typically die of complications from the disease about 20 years after the onset of symptoms. Most of those who have Huntington’s disease do not show symptoms until middle age, meaning that many unknowingly pass on the mutated gene to their children.

In 2009, Yang and his colleagues genetically manipulated a small domain on the huntingtin protein called N17 that is located immediately before the mutant glutamine stretch. In doing so they found they could dramatically suppress the disease in an earlier mouse model of Huntington’s disease they had developed.

That led them to the question that framed their latest study: If the N17 domain could alter the mutant huntingtin for the good, what would happen if the N17 domain function were completely abolished?

To find the answer, the scientists developed a new mouse model with the N17 domain removed altogether, allowing them to dissect the molecular function of that part of the protein that causes the disease in mice.

“Although we did expect the mouse model to exhibit somewhat more severe disease symptoms compared to our previous Huntington’s disease mice, we were surprised to discover that deleting the domain in the new mice caused multiple disease-like symptoms and neuronal cell loss that are reminiscent of those found in Huntington’s patients,” said Dr. Xiaofeng Gu, the study’s first author and an assistant researcher in Yang’s lab.

These symptoms, which also strike in adulthood for the mice, included chorea-like and dystonia-like movement deficits, progressively worsening gait with spontaneous falls, and atrophy and neuronal cell loss in a specific brain regions, all very similar to what would be expected in people with adult-onset Huntington’s.

This new model provides important clues regarding how a normally functioning N17 domain might protect neurons in the brain against the disease, Yang said. Compared to similar mice with an intact N17 domain, the mice lacking N17 showed a markedly faster accumulation of mutant huntingtin, which appears as aggregated clumps in the nuclei of brain cells.

“This study makes clear that a major neuroprotective function of N17 is to prevent the mutant protein from entering the nucleus and eliciting more severe toxicities,” Yang said, adding that the result is consistent with findings from several studies of other, related disorders in which mutant proteins with expanded glutamine in the nucleus are key for jump-starting a disease.

The researchers also found that the mice in the study experienced inflammation in the brain somewhat similar to that found in people with Huntington’s.

“Neuroinflammation is emerging as a potentially shared mechanism in multiple neurodegenerative disorders, including Alzheimer’s disease, Parkinson’s disease and amyotrophic lateral sclerosis, and the mouse model shows similar inflammation to that found in both Huntington’s and Alzheimer’s,” Yang said. “So these mice may have the potential to be used to study disease mechanisms and test neuroprotective or anti-inflammatory therapeutics for these various disorders.”

Next, the researchers will focus on understanding the detailed molecular pathways that function through N17 to regulate trafficking the huntingtin protein between the cytoplasm and nucleus of a cell, and test whether targeting these pathways could prevent the onset or slow the progression of the disease in mouse models of Huntington’s.

The research was supported by funding from the Hereditary Disease Foundation and the National Institute of Neurological Disorders and Stroke (R01NS049501, R01NS074312, R01NS084298-01). Additional support of the Yang lab’s Huntington’s research is provided by the CHDI Foundation, the McKnight Foundation and the David Weil Fund to the Semel Institute at UCLA.