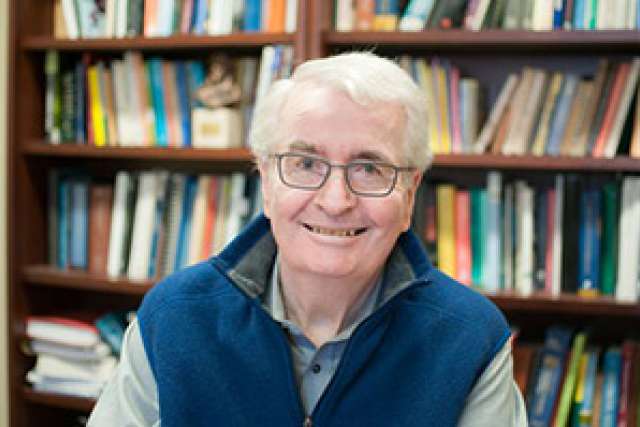 John Froines once believed he had to choose between twin passions: research or public policy. Fortunately for people who are exposed to toxic chemicals, he is spending his highly successful career pursuing both.

It’s a long way from the small town of Carpi in Northern Italy to the UCLA campus where John Froines has made his professional home for the last 34 years. But when Carpi’s mayor presented the Fielding School professor emeritus with the prestigious 2013 Collegium Ramazzini Award for his contributions in occupational and environmental health research and policy, it illustrated the long reach and worldwide recognition of Froines’ body of work.

Over the course of a four-decade-plus career in the field of toxicology and exposure assessment, Froines has played an important role in some of the most seminal evidence-based policies to protect human health — from developing the federal standards for lead and cotton dust exposure  in the late 1970s to identifying diesel exhaust as a toxic air contaminant 20 years later.

His work didn’t end there. In 2013, he co-authored a case study on California’s process for assessing risk and approving the use of methyl iodide as a fumigant for crops such as strawberries. That report, issued by the UCLA Fielding School-based Sustainable Technology and Policy Program, pointed out a failure in the system in approving a chemical that a Froines-chaired committee concluded could not be used safely at any level.

Throughout his career, Froines has gone up against powerful economic interests in his efforts to translate science into policies that protect the health of some of the most vulnerable populations — migrant farmworkers, blue-collar employees and low-income families residing near freeways, among others. It’s been an ideal marriage of two passions for someone who, in the early 1970s, found himself at a crossroads.

Froines had been trained as a scientist at UC Berkeley and Yale before going on to postdoctoral work at the Royal Institution of Great Britain under a Nobel laureate, Sir George Porter. But he also maintained a strong interest in social issues and was active in politics and the anti-Vietnam War movement. “I had to figure out whether I was going to become a person focused on policy and politics, or whether I was going to do science,” he recalled.

The question was resolved, and Froines’ career path set when he was hired to serve as director of Vermont’s Office of Occupational and Radiological Health in 1974. “Getting involved in environmental and occupational issues in that way made me realize I could combine my scientific interest with social policy,” Froines said.

During the Carter administration, Froines was tapped to serve as director of the Office of Toxic Substances for the Occupational Safety and Health Administration (OSHA). There, he authored landmark standards for cotton dust and lead — the only two standards, he noteed, that OSHA has ever adopted for non-carcinogen toxicity. The cotton dust standard helped to eliminate byssinosis, a respiratory disorder that affected workers in the textile industry. The lead standard, designed to protect workers from the neurologic effects associated with the occupational use of lead, was promulgated despite strong industry opposition.

After serving as deputy director of the National Institute for Occupational Safety and Health, Froines decided to move into academia, joining the Fielding School faculty in 1981. Throughout the 1980s and 1990s he continued to focus on occupational health with a research emphasis on arsenic, chromium, lead, and the development and application of hazard surveillance methods.

For the last 15 years he has turned much of his attention toward studying the toxicity of air pollutants — his work on the mechanistic features of the roadmap leading to health outcomes has been widely cited in policy-setting arenas. And Froines has himself been a central figure in shaping policy, serving on California’s Scientific Review Panel on Toxic Air Contaminants. It was under his leadership as director in 1998 that the panel identified diesel exhaust as a carcinogenic air contaminant, setting the stage for California to become a world leader in regulating and reducing the health risks associated with exposure to diesel particulate.

Today, Froines said, there is much greater recognition of the problem of toxic environmental exposures, but also more opposition to addressing it.

“An extraordinary amount of science has now gone into identifying chemicals as being toxic or worse,” Froines noted. “But when you consider the fact that the Environmental Protection Agency says there are between 60,000 and 80,000 chemicals used in the environment and that OSHA has, since 1970, adopted only 26 standards, you realize we’re nowhere near addressing the problem.”

As a faculty director emeritus of the UCLA Sustainable Technology and Policy Program (STPP), Froines is in the vanguard of a new paradigm for tackling these issues. The program is an interdisciplinary initiative of the Fielding school and UCLA’s law, engineering and business schools. Peter Sinsheimer of the Department of Environmental Health Sciences in the Fielding school serves as executive director.

The program is developing testing methods in the emerging field known as predictive toxicology that would enable thousands of chemicals to be assessed in the laboratory for their potential health effects. The program is also spearheading an approach called alternatives analysis, the process of scientifically identifying and then promoting the use of safer substitutes once a chemical is identified as hazardous.

In addition, STPP has a strong law and policy component led by Timothy Malloy, a professor in the UCLA School of Law with a secondary appointment in the Fielding school and a STPP faculty director.

“In the past, scientists have come up with methods that weren’t closely linked with legal frameworks or regulations,” said Malloy. “We’re taking a pragmatic approach by developing the frameworks and methods in concert.”

When it comes to combining policy and science, Malloy said he couldn’t ask for a better partner. “John brings both a depth of knowledge and a perspective, going back to the early days of occupational and environmental health regulation, that you can’t get anywhere else,” Malloy said, “and he has a remarkable ability to translate complex scientific issues into understandable language.”

Hailed by the committee for the Ramazzini Award as a “public health hero,” Froines reflected on a career that has enabled him to pursue his dual passions. “I was honored to receive the award and will cherish it always,” he said. “It proves the value of integrity in science and demonstrates that one is able to combine solid science with policy.”

This story was taken from UCLA Public Health, a magazine published by the UCLA Fielding School of Public Health.