UCLA scientists awarded $4.2 million to study how pollution affects development of the placenta 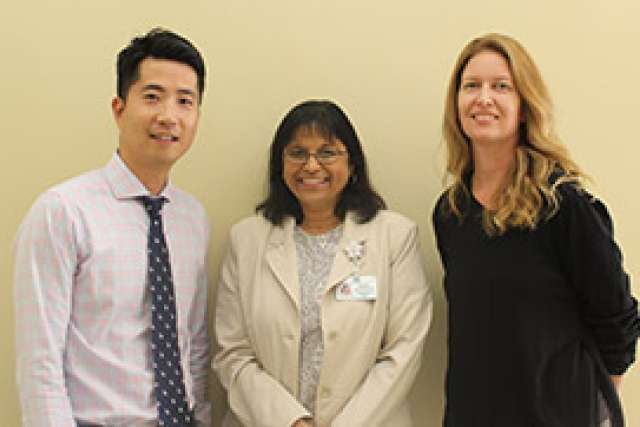 Building upon earlier work that has examined the impact of air pollution on pregnancy, Kyung Sung, Dr. Sherin Devaskar and Dr. Carla Janzen, along with Dr. Beate Ritz (not pictured), will study how exposure to pollution affects the placenta.

The National Institutes of Health has awarded UCLA a $4.2 million grant to study how environmental pollution negatively affects how the placenta develops in pregnant women, ultimately contributing to poor pregnancy outcomes.

Dr. Sherin Devaskar, the Mattel Executive Endowed Chair of the department of pediatrics at UCLA Mattel Children's Hospital, will lead a team of researchers that will build upon earlier work that has examined the impact of air pollution on pregnancy.

“While we know there is a link between airborne pollution and poor birth outcomes, we don’t know the mechanisms — how it occurs,” said Devaskar, who is also the executive director of the UCLA Children’s Discovery and Innovation Institute. “The aim of the study is to develop and evaluate new magnetic resonance imaging (MRI) technologies to assess the impact of environmental pollution exposure so that we can accurately predict placental insufficiency; that is, the insufficient blood flow and thereby nutrients to the placenta during pregnancy.”

The placenta is a critical organ that shuttles blood, oxygen, and nutrients from mother to fetus and clears harmful waste like carbon dioxide. It also produces hormones to help sustain the pregnancy and regulate the immune system so that mother and fetus can coexist. Many problems of pregnancy — such as preeclampsia, preterm birth, and even stillbirth — can occur because of problems with the placenta.

In 2014, the NIH began the Human Placenta Project, an initiative to revolutionize understanding of the placenta. If researchers can develop tools to monitor the placenta from the earliest stages of pregnancy, physicians may one day be able to identify problems sooner and intervene more quickly.

“The placenta has always been the forgotten organ due to its transient existence but, despite that temporary role, it is a critical organ that connects mother and child,” Devaskar said. “It is also the starting point in determining the health of a child.”

The early stages of pregnancy are a particularly vulnerable time because the fetus is developing and a mother’s exposure to air pollution may alter the way that the placenta forms and how it functions throughout the rest of pregnancy. “Any alterations in either the structure or function of the placenta will interfere with the health and well-being of mother and child,” Devaskar said.

Previous studies at UCLA have shown that exposure to significant air pollution from traffic, air toxins from industry, or other environmental toxins can result in poor birth outcomes, including premature birth and intra-uterine growth restriction, which have both been investigated previously by this team of researchers. These conditions are strongly correlated with infant morbidity and in addition, can lead to a host of adult diseases that range from diabetes and obesity and coronary artery disease, to cognitive disabilities and cancer.

Understanding the mechanism of environmental pollution on the placenta will help clinicians recognize placental insufficiency early on, and allow for preventive and therapeutic strategies before detrimental consequences occur, Devaskar said. The study, she noted, could help ensure safe and healthy pregnancies for women.

Other researchers who will be involved in the study include Dr. Carla Janzen, Kyung Sung, and Dr. Beate Ritz, all of UCLA.