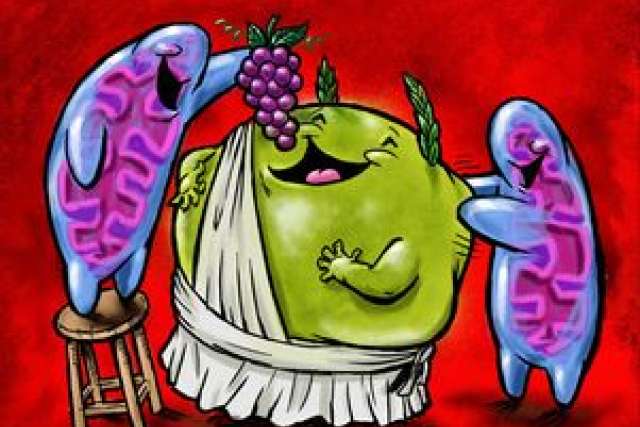 Mitochondria, known to most people as the “powerhouses of the cell,” have been recognized for decades as the cellular organelle where sugars and fats are oxidized to generate energy. Now, new research by UCLA scientists has found that not all mitochondria fit this definition. Within each cell a group of specialized mitochondria can be found attached to fat droplets. Rather than burn fat to create energy, these specialized mitochondria are responsible for providing the energy to build and store fat molecules.

“This is really a whole new view of mitochondria and what they can do,” said lead author Dr. Orian Shirihai, a professor of medicine in endocrinology and pharmacology at the David Geffen School of Medicine at UCLA. The finding, published in Cell Metabolism, may one day lead to new treatments for obesity, fatty liver and other metabolic diseases, he added.

Mitochondria, small organelles that are present by the hundreds or thousands inside many types of cells, contain the molecular machinery for producing ATP, the molecule that stores energy in cells. Mitochondria within any given cell have always been considered uniform, said Shirihai, because they constantly merge and separate with each other in processes known as “fusion” and “fission,” respectively.

In the past, researchers have noticed — when looking at cells under a microscope — that some mitochondria associate with lipid droplets, small clumps of fatty molecules. These lipid-droplet-bound mitochondria are particularly abundant in brown fat, a recently discovered type of fat tissue that uses fat to generate heat rather than storing fat.

Researchers — Shirihai; UCLA M.D./Ph.D. candidate Ilan Benador, the study’s first author; Marc Liesa, an assistant professor of medicine; and UCLA graduate student Michaela Veliova — looked in more detail at this group of mitochondria. First, they observed that the mitochondria clustered around lipid didn’t seem to interact in the normal fission and fusion cycle with the rest of the mitochondria in brown fat cells.

“They are like an exclusive club of mitochondria that don’t let others in,” said Shirihai, who heads the metabolism research theme at the Geffen School of Medicine.  “And then the big question was why are they behaving like this?”

To answer the question, the researchers developed a new method to extract lipid-droplet-associated mitochondria from cells. They separated fat droplets from other cellular components, floated the fats in solution, and stained the mixture for the presence of mitochondria, confirming that the organelles had remained associated with the isolated lipid droplets. Then they spun the samples at high speed in a centrifuge, separating the mitochondria for further study.

When the team studied the mitochondria that had been isolated, they found that they were biochemically distinct from mitochondria found elsewhere in the cell.

When brown fat cells are activated to burn fat and generate heat — as happens in the cold — the mitochondria dispersed from lipid droplets.

“If we identify ways to prevent the interaction of mitochondria with lipid droplets in the first place, we may be able to activate brown fat to burn fats and treat obesity,” Liesa said.

The finding also calls into question traditional techniques used to study mitochondria. To isolate mitochondria for research, scientists generally use protocols that separate the organelles from other components of cells — including fats, which are discarded. Now, it turns out, those trashed fats likely included a subset of previously unexplored mitochondria.

The UCLA team is now planning to study whether mitochondria in other tissue types — including the liver, which builds lots of fat molecules — also have this specialized function in helping to assemble lipid droplets.

The study’s other authors are Anton Peterski, Essam Assali, Rebeca Asin-Perez, Michael Shum, William Barshop and James Wohlschlegel, all of UCLA; Kiana Mahdaviani and Barbara Corkey of Boston University; Jakob Wilkstrom of the Karolinska Institutet; Marcus Oliviera of Universidade Federal do Rio de Janiero; Saviero Cinti of the University of Ancona; and Carole Sztalryd of the University of Maryland Baltimore County.

Funding for the study and the researchers involved was provided by the Boston University T32 Training Program in Metabolism, Endocrinology and Obesity; the National Institutes of Health; a UCSD/UCLA Diabetes Research Center grant; and the Conselho Nacional de Desenvolvimento Cientifico e Tecnológico.

Learn more about the metabolism research theme at UCLA.