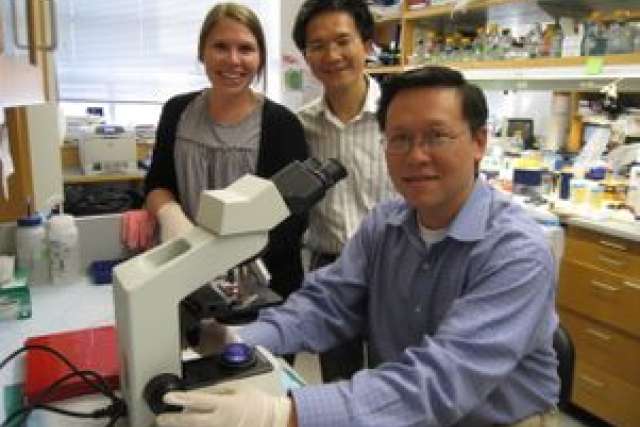 UCLA scientists have identified a molecular switch that prevents Huntington's disease from developing in mice. Published in the Dec. 24 edition of the journal Neuron, the discovery suggests a new approach to treating the genetic disorder, which ultimately leads to death in as little as 10 years.

Affecting one out of every 10,000 Americans, Huntington's progressively deprives patients of their ability to walk, speak, think clearly and swallow. People who inherit the disorder don't show symptoms until mid-life, after many have had children and unknowingly passed on the disease. Currently, there is no effective treatment to prevent the onset or slow the progression of the disease.

Huntington's is caused by a mutation in the polyglutamine (polyQ) region of a very large protein called huntingtin. Because huntingtin is found everywhere in the body, it is a challenge to study, and the function and mechanism behind the mutant protein still remain elusive.

"It's unclear how the mutant protein causes age-related and progressive loss of brain cells in patients with Huntington's disease," said senior study author X. William Yang, associate professor of psychiatry and biobehavioral sciences at the Semel Institute of Neuroscience and Human Behavior at UCLA. "We explored whether regions of the protein besides the polyQ mutation play a role in the development of the disorder."

Collaborators Joan Steffan and Leslie Thompson, of the University of California, Irvine, showed that two amino acids near the beginning of the huntingtin protein can be modified by a chemical process called phosphorylation, which cells use to control protein function after the proteins have been made.

To test whether phosphorylation could influence Huntington's disease in a living animal, Yang's laboratory generated two mouse models to carry the polyQ HD mutation and modified the two amino acids in two different ways — one to mimic phosphorylation, the other to prevent it.

"Our study identified a critical molecular switch which lies next to the polyQ mutation in the huntingtin protein," Yang said. "We were surprised to find that subtle modification of only two serine residues in this very large protein can prevent the onset of disease. This finding suggests an exciting new avenue to develop therapeutics for Huntington's disease."

This study was funded by the Hereditary Disease Foundation and National Institute of Neurological Disorders and Stroke.