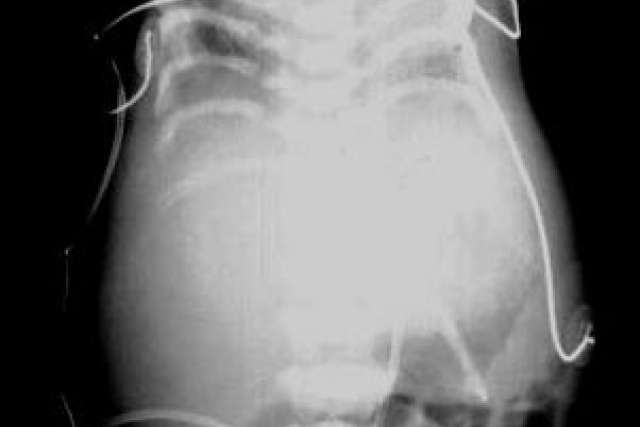 Published in the April 1 online edition of the American Journal of Human Genetics, their findings will allow for earlier testing of embryos at risk for the disease.

Many things go awry in short rib polydactyly syndrome. The fetus develops extra fingers and toes and its skeleton doesn't grow, resulting in stunted ribs that prevent the lungs from maturing in the womb. Unable to breathe on its own, the child dies shortly after birth.

Parents currently must wait until the second trimester of pregnancy for a diagnosis — a long time to wait for potentially agonizing news about one's unborn child.

"Now that we've identified the genetic basis of the disease, families will be able to obtain a prenatal diagnosis within about 12 weeks," said Dr. Deborah Krakow, associate professor of orthopedic surgery and human genetics at the David Geffen School of Medicine at UCLA. "Parents will also be able to screen embryos conceived in vitro to help select those free of the genetic mutation before uterine implantation."

Roughly one in 300 people is a carrier of the gene mutation responsible for the syndrome. Both parents must carry the mutated gene in order for their child to inherit the disease.

In the hope of finding a common genetic link to the disease, the UCLA team studied DNA samples from three families whose children died of short rib polydactyly syndrome. Dr. Stan Nelson, UCLA professor of human genetics, and his laboratory employed powerful genomic technology to rapidly test hundreds of thousands of gene variations in each fetus.

"It took scientists 10 years to map the human genome," Nelson said. "New technology enables us to search a child's entire genome in two weeks without testing the parents or other family members. It's a highly efficient way to quickly sample DNA and identify shared gene variations among people."

In the UCLA study, the research team identified a DNA sequence shared by three siblings who died of the disease. Like a signpost, it directed the scientists to a chromosomal location they suspected of housing the disease-causing gene.

"Each of us inherits different chromosomes from our mothers and fathers," Nelson said. "If the child's genome contains the same DNA from both parents, we know that the mother and father are related in some way. They share a piece of ancestral DNA — a common red flag for people known to have or carry a genetic disease."

After narrowing her search to three identical regions on the genome, Krakow zeroed in on one as the likely culprit. Her hunch proved correct. Not only did she identify the mutation in the initial family that lost three children, but she confirmed its presence in two other families whose infants also died of the disease.

Krakow and Nelson's next step will be to seek out other genes that contribute to short rib polydactyly syndrome and uncover how these factors interact to cause the disorder.

"One of the reasons this disease is hard to crack is that it is caused by multiple genes, not just one," Krakow said. "We are searching for other gene variants in other families affected by the syndrome."

The DNA-scanning techniques developed by Nelson and his colleagues can be used to identify any hereditary disease-causing gene. The findings will enhance doctors' abilities to determine individual genes' specific roles and provide a more complete picture of healthy and abnormal human development.

Roughly 3 percent of all infants are born with birth defects. Some 5 percent of these children suffer from genetic defects affecting the skeleton, and in this group, about 5 percent are short rib polydactyly syndrome patients.

The National Institute of Child Health and Human Development funded the study.