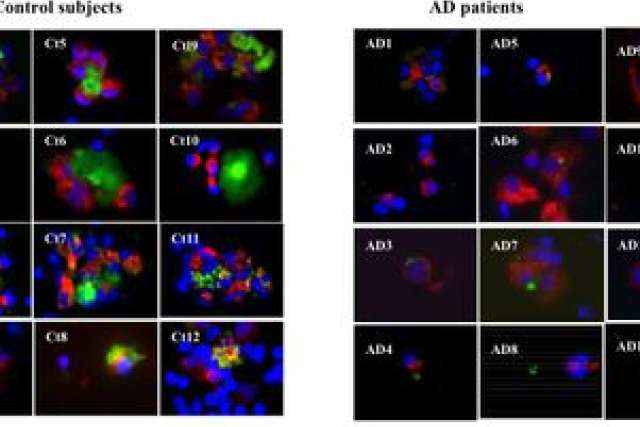 UCLA scientists have discovered a way to measure the amount of amyloid beta that is being absorbed by immune cells in the blood. Amyloid beta forms the plaques considered the hallmark of Alzheimer's disease, and if the immune system isn't adequately clearing amyloid beta, it may indicate Alzheimer's risk, according to the researchers.

MP Biomedicals LLC, a global life sciences and diagnostics company dedicated to Alzheimer's disease research, has received an exclusive, worldwide license to commercialize the UCLA technology and create a diagnostic blood test for public use to screen for Alzheimer's risk.

"Early diagnosis is the cornerstone of preventive approaches to Alzheimer's disease," said Dr. Milan Fiala, lead author of the UCLA study and a researcher at the David Geffen School of Medicine at UCLA and the Veterans Affairs Greater Los Angeles Healthcare System. "We are pleased that the process we've identified using immune cells to help predict Alzheimer's risk will be further developed by MP Biomedicals."

"We are excited by the opportunity to forward the UCLA science in creating a cost-effective blood test to screen for Alzheimer's risk that could be used in any hospital or lab," said Milan Panic, CEO of MP Biomedicals.

Dr. Miodrag Micic, vice president of research and development for MP Biomedicals, noted that other blood tests for Alzheimer's diagnosis measure factors such as inflammation and infection, which are also present in other diseases like atheroclerosis and may complicate the interpretation of results.

The recently published study on the process identified by UCLA, which uses the "innate" immune system present at birth, appeared in the May issue of the Journal of Neuroimmunology.

In the study, researchers took blood samples and isolated monocytes, which from birth act as the immune system's janitors, traveling through the brain and body and gobbling up waste products — including amyloid beta. The monocytes were incubated overnight with amyloid beta, which was labeled with a fluorescent marker. Using a common laboratory method known as flow cytometry, researchers then measured the amount of amyloid beta ingested by the immune cells by assessing how much fluorescence was being emitted from each monocyte cell.

"Patients and control subjects were also tracked over time to see if their immune response changed," Fiala said. For example, an Alzheimer's disease patient over time showed declining results, while a university professor continued to demonstrate a high uptake of amyloid beta.

Micic noted that the new method could be a flag for further testing and interventions.

"Similar to screening patients for heart disease risk by a cholesterol test, a positive result for Alzheimer's risk in some patients may suggest further interventions and advanced diagnostics, such as a brain PET scan and neurocognitive testing."

The study was funded in part by MP Biomedicals LLC. Fiala is a consultant for the company and also served in the company's speakers bureau.

MP Biomedicals is a worldwide corporation with ISO-certified and FDA-approved manufacturing and distribution facilities throughout the globe. Headquartered in Southern California, the company manufactures and sells more than 55,000 products and is one of the only companies in the industry to offer a comprehensive line of life science, fine chemical and diagnostic products. MP Biomedicals is dedicated to giving scientists and researchers innovative, quality tools and superior service to aid them in their quest for groundbreaking discovery and turning the hope for life-changing solutions into a reality.

The David Geffen School of Medicine at UCLA, founded in 1951, is the youngest medical school to be ranked among the top 11 in the nation by U.S. News & World Report. The school has more than 2,000 full-time faculty members, including recipients of the Nobel Prize, the Pulitzer Prize and the National Medal of Science.