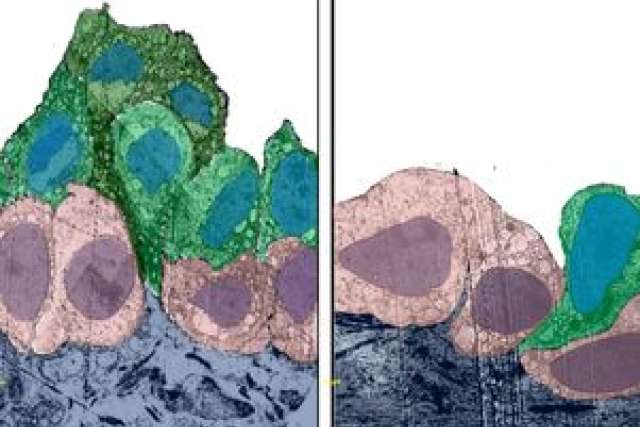 Findings from the three-year study could eventually lead to new personalized treatments for lung cancer, which is responsible for an estimated 29 percent of U.S. cancer deaths, making it the deadliest form of the disease.

The study was published online on June 19 in the journal Stem Cell. Gomperts, a member of the UCLA Eli and Edythe Broad Center of Regenerative Medicine and Stem Cell Research and the UCLA Jonsson Comprehensive Cancer Center, collaborated with Manash Paul and Bharti Bisht, postdoctoral scholars and co-lead authors of the study.

Adult stem cells in lung airways are present specifically to repair the airways after injury or disease caused by smoking, pollution, viruses or other factors. Gomperts and her team found that this reparative process is tightly regulated by molecules called reactive oxygen species, or ROS.

The UCLA study found that the dynamic flux of ROS from low to moderate levels in the airway stem cells is what drives the repair process, and that the increase in ROS levels in the repairing cell is quickly reduced to low levels to prevent excessive cell proliferation.

Gomperts' lab found that disrupting this normal regulation of ROS back to low levels is equivalent to pulling the brakes off of the stem cells: They will continue to make too many of themselves, which causes the cells not to mature and instead become precancerous lesions. Subsequent progressive genetic changes to the cells in these lesions over time can eventually allow cancerous tumors to form.

"Low ROS is what keeps stem cells primed so that your body is poised and ready to respond to injury and repair," said Gomperts, who also is an associate professor in the department of pediatrics at UCLA. "Loss of this ROS regulation leads to precancerous lesions. Now, with this precancerous model in place, we can begin looking for what we call 'driver mutations,' or those specific changes that take the precancerous lesions to full-blown cancer."

Gomperts said that because many different factors — including cigarette smoke, smog and inflammation — could potentially trigger an increase in ROS in the airway stem cells, researchers might eventually be able to customize treatments based on the cause. "There are likely multiple ways for a person to get to a precancerous lesion, so the process could be different among different groups of people. Imagine a personalized way to identify what pathways have gone wrong in a patient, so that we could target a therapy to that individual."

The research's ultimate goal is to develop a targeted strategy to prevent pre-malignant lesions from forming by targeting the biology of these lesions and therefore preventing lung cancer from developing.

"Our study is important because it sheds light on how lung cancer can form, and this will hopefully lead to new therapies for this terrible disease," Paul said.

The UCLA study also is noteworthy for finally identifying specifically how ROS affects the proliferation of stem cells.