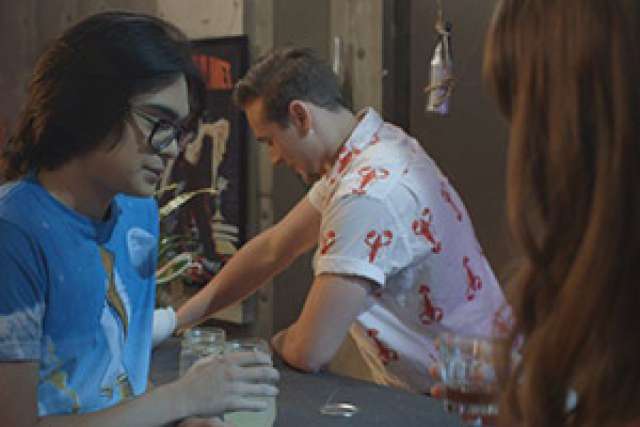 "Micro-Aggressor," one of three short films created by UCLA theater, film and television students, tells the story of young people at a bar who make insensitive comments based on hurtful stereotypes.

The three- to four-minute videos, released online by the UCLA Healthy Campus Initiative (HCI), provide insight into how young adults can effectively handle circumstances related to alcohol use and sexual consent, micro-aggressions and body image. The videos, the work of roughly 100 students who wrote, produced, directed and acted in them, were developed as part of the “Health Advocacy Narratives” class taught by L.A.-based writer and film director Eric F. Martin, a UCLA alumnus.

“We wanted to give students an opportunity to gain practical industry skills and experience while drawing attention to important issues that impact communities and campuses alike,” said Wendy Slusser, a clinical professor of pediatrics in the schools of medicine and public health and associate vice provost for HCI. The initiative aims to make UCLA the healthiest college campus in the nation. “These issues play a role in the day-to-day lives of many and can provide insight into how we treat ourselves and others. We hope people will find these shorts engaging and informative and that they will share them with others in an effort to encourage open and honest dialogue.”

The video “Being Bryan” depicts the story of a young man who loves soccer, but lacks confidence because of his body size. The story follows Bryan as he tries to lose his inhibitions and get into the game.

“I wanted to set the film in a world we all would immediately identify with,” said graduate student Arkesh Ajay, the film’s writer, director and co-editor. “At the same time, I wanted the film's world to have a certain pace and excitement about it. Nothing captures these two things together better than sports does.”

Ajay, a second-year master’s film and television student, said that, although we are often our own worst critics when it comes to body image, our words, attitudes and actions can also influence how those around us view themselves.

“I'd urge each viewer to take a moment and think whether they're acting as a catalyst in feeding someone's negative body image, or are they overlooking a friend who might be struggling with this issue,” said Ajay. “It's our responsibility as friends — or, at an even more fundamental level, as people — to make sure that we aren't part of the problem. The next step … would be to try and help them out of it.”

M.J. Watz, a UCLA senior majoring in film production and minoring in theater, directed “Micro-Aggressor,” a comedic short about micro-aggressions that surface at a bar where patrons are trying to get to know one another. Micro-aggressions are the brief everyday exchanges that denigrate individuals of certain marginalized groups, in many cases, unbeknown to the person who is responsible for the negative exchange.

Watz said that humor can be a powerful tool in helping generate social change.

“These are likable characters that hurt and demean one another because of a lack of self-awareness, but ultimately they are trying to connect,” said Watz. “If these interactions are reflected upon, they show fundamental assumptions being made about a character due to factors they have no control over, such as their race or gender.”

Micro-aggressions can result in missed friendships and opportunities, hurt feelings and avoidable misunderstandings, among other things, Watz said. “If we can acknowledge micro-aggressions and work to eliminate them, we could make deeper, more inclusive connections with people from different spheres of life than our own right from the get-go.”

The third-year master’s student in production and directing said that his team’s biggest challenge was to convey an important but complex message in just a few minutes.

“We also wanted to be as respectful of people's true experience as possible, without resorting to flimsy stereotypes of drunken coeds and frat-boy villains,” Vennemeyer said. “Alcohol-related, nonconsensual sex is a real problem on campuses across the country and happens much more often than we realize. If there's any way this film can help prevent a few of these incidents, it's worth sharing.”

The films, which were released during the winter quarter to various campus units, are garnering praise and being used in campus education and training programs.

Beth Glazer, training and development coordinator at UCLA Recreation, has integrated “Being Bryan” and “Micro-Aggressor” into her department’s orientation sessions.

“These videos have allowed the issues to become more tangible for our new student employees, whether they have found themselves in these situations or not,” said Glazer. “They help them think through how they want to act, both inside the classroom and workplace and outside of campus. They see how easy it is to make a difference, and this is the part I find most critical. They realize that human nature is to be biased or to judge, but it’s what you choose to do with these thoughts that matter.”