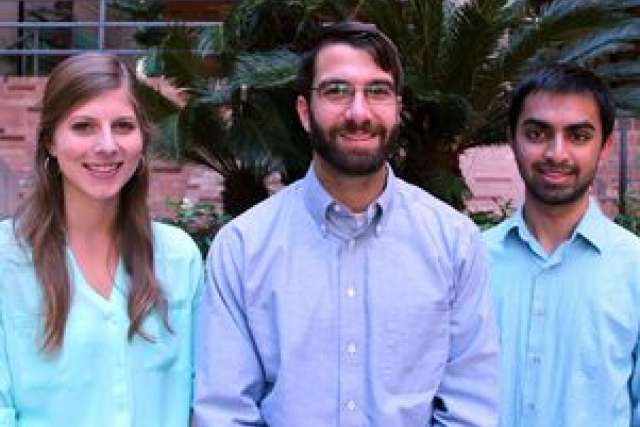 For more than a year, both students have been working in professor Mark Cohen’s lab under the direction of biomathematics graduate student Wesley Kerr doing essential work to find out whether a computer-aided diagnosis of epilepsy using clinical information provided by physicians can help them detect and treat the condition correctly.

“You couldn’t do this type of research without them,” explained Kerr, who, with the students, is working on estimating the probability of epileptic versus non-epileptic seizures based on the historical factors reported by the patient to their neurologist. “The alternative to having knowledgeable people read these clinical notes is to have computers do it. And computers are nowhere as good at pulling out these individual details. So we really need these undergraduates.”

The two-way benefits of involving undergraduates in original research were part of an important message all three students recently took to policymakers and their staffs on Capitol Hill in Washington, D.C., after they were chosen to represent California and present their research at Posters on the Hill, an event sponsored by the national Council on Undergraduate Research.

Patel and Barritt present their poster on Capitol Hill.

Their application, along with one from CSU Dominguez Hills, was one of 60 chosen by the council from approximately 600 submitted by undergraduate researchers from colleges and universities across the nation.

During their big day on Capitol Hill, the student researchers met privately with staffers from the offices of Senators Dianne Feinstein and Barbara Boxer and three California Congress members to talk about the importance of funding undergraduate research and the challenge of finding support for innovative research projects such as theirs.

The Posters on the Hill exhibit typically picks just one or two research projects per state to participate in the prestigious event, said Cohen, Kerr’s faculty adviser and a professor-in-residence of psychiatry in the Semel Institute for Neuroscience and Human Behavior.

“One of our laboratory’s goals is to create an automated system that can aid physicians in distinguishing patients with epileptic and non-epileptic seizures,” Kerr said. “Currently, that’s a challenge. On average, the time from the first seizure to the diagnosis of non-epileptic seizures is seven years.”

“A large fraction of patients with seizure disorder are misdiagnosed and treated inappropriately,” Cohen said. “As such treatments carry their own risks and negative side effects, their research could positively affect the lives of millions of Americans.”

In addition to serving patients with seizure disorder, the computer-aided diagnostic methods developed by Kerr and his team may be applicable to the diagnosis of other maladies in the future.

While being able to participate in this kind of cutting-edge research is exciting, Patel and Barritt said, they also point out that these opportunities, made possible by UCLA’s Undergraduate Research Centers, are valuable for all students, whether they are in pre-med or headed for law school.

“It’s definitely helped me academically,” said Barritt, who wants to work in criminal prosecution. “One big benefit of doing undergraduate research is that everyone can be a part of it. It’s so beneficial for the skillset that it teaches you. It sharpens your critical thinking skills, your ability to look at many different factors at the same time and draw conclusions. And having publications on your resume won’t hurt your grad school application, either.”

Akash said the experience has helped solidify his interest in medicine. “It also opened up a new avenue for me. I thought going into medicine meant going to clinics and treating patients. But there’s another avenue — doing research to create new tools to help physicians diagnose disease. Now I’m thinking about doing research or even going into public policy in the area of medicine or the health sciences.”