UCLA study: Combination therapy may be more effective against the most common ovarian cancer 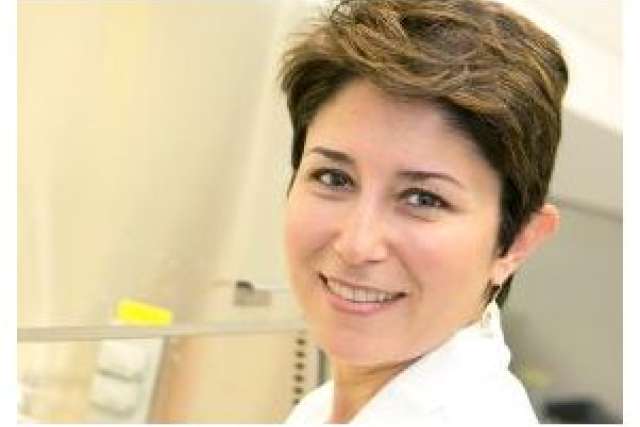 High-grade serous ovarian cancer often responds well to the chemotherapy drug carboplatin, but why it so frequently comes back after treatment has been a medical mystery.

Now a team of UCLA researchers has discovered that a subset of tumor cells that don’t produce the protein CA125, a biomarker used to test for ovarian cancer, has an enhanced ability to repair their DNA and resist programmed cell death — which allows the cells to evade the drug and live long enough to regrow the original tumor.

It’s that regenerative ability and their resistance to carboplatin therapy that make the cells so dangerous, said Deanna Janzen, the study’s first author, and a senior scientist in the G.O. Discovery Lab at UCLA.

The study, which appears August 3 in the peer-reviewed journal Nature Communications, showed that pairing the chemotherapy with an experimental drug eliminates the deadly population of cells believed to be responsible for repopulating the tumor.

The drug, birinapant, sensitizes the CA125-negative cells to the chemotherapy by restoring apoptosis, or programmed cell death, said Dr. Sanaz Memarzadeh, a senior author of the study and a UCLA gynecologic cancer surgeon.

Combining chemotherapy and birinapant significantly improved disease-free survival in laboratory models of human ovarian cancer compared to using either therapy alone. This suggests that targeting the CA125-negative cells may improve outcomes in these high-grade serous cancers, the most common subtype of ovarian cancer, said Memarzadeh, who also is a UCLA associate professor of obstetrics and gynecology and director of the G.O. Discovery Lab. This is vital, since the cancer recurs in 80 to 85 percent of patients despite standard treatments.

Scientists had previously hypothesized that there was a population of cells that could not be reached using the conventional treatment of surgery followed by chemotherapy, but they had been mostly unable to identify them.

“We found that these cells were like little time bombs, hiding from the chemotherapy and then later initiating tumor growth,” Memarzadeh said. “We think that by isolating the CA125-negative tumor cells we have uncovered this reservoir of carboplatin-resistant high-grade serous ovarian cancer cells.”

In the five-year study, the research team first analyzed ovarian tumors gathered from patients at UCLA. Most of the cells that made up the tumors were positive for CA125, but the researchers found a small population that were negative and focused on those, Janzen said. The team wondered if the CA125-negative cells grew the same as those that were CA125-positive. The results were alarming.

Memarzadeh, who also is a member of UCLA’s Jonsson Comprehensive Cancer Center and the Eli and Edythe Broad Center of Regenerative Medicine and Stem Cell Research, agreed.

“For me, as a physician, this was frightening,” she said. “The chemotherapy drug killed the CA125-positive cells and left behind the cells armed with the capacity to regrow the tumor.”

The test most widely used to detect recurrences of serous cancer works by measuring CA125 levels. As a result, Memarzadeh said, the test completely overlooks the cells that slowly regrow the tumor, which are CA125-negative.

Once the researchers isolated the CA125-negative cells, they worked with UCLA collaborators to analyze the genes expressed in these cells. They discovered the ability of these cells to quickly repair the DNA damage done by the chemotherapy, and they found the cells’ “anti-death” protein. The DNA damage that killed the CA125-positive cells did not work on the CA125-negative cells because of the two protective mechanisms.

“These cells reacted like hair does to chemotherapy,” Janzen said. “The treatment damages most of patients’ hair cells, causing the hair to fall out. But the cells responsible for hair growth live on, so hair regrows after therapy stops. Similarly, most of the tumor cells die in response to platinum therapy, but the CA125-negative cells survive and serve as a source of tumor re-growth once therapy ceases. The good news is that we found a small molecule drug being tested in cancers that activates apoptosis and we decided to test it in combination therapy.”

Going forward, Memarzadeh and her team plan to conduct a clinical trial of the combination therapy in women whose tumors have high levels of the anti-death protein. She estimates that about 50 percent of women with ovarian cancer have tumors with this type of tumor and would qualify for the trial, which needs about $2 million in philanthropic funding before it could begin.

The researchers also are seeking other potential drug targets in the 50 percent of patients who don’t have high levels of the anti-death protein, as well as biomarkers in addition to CA125 that could be used to screen for ovarian cancer.

“We do a phenomenal job with surgery, peeling off as much of the tumor as we can see, and then we do standard chemotherapy, but the cancers still recur,” Memarzadeh said. “I think our study helps explain why this happens. If this combination of drugs proves effective, we may be able to improve outcomes for this deadly disease. I think it’s entirely feasible.”

Ovarian cancer accounts for 5 percent of cancer deaths among women, and causes more deaths than any other gynecologic cancer. About 21,000 American women will be diagnosed with ovarian cancer this year, and more than 14,000 will die of the disease.

“This study provides evidence that CA125-negative high-grade serous ovarian cancer cells have stem properties and are inherently platinum resistant. The de novo platinum resistance of this tumor subpopulation can explain why these cancers consistently reappear after first-line platinum-based chemotherapy,” the study states. “On the basis of the promising preclinical results here, improving outcomes for this deadly malignancy could be achieved simply by supplementing existing therapies that work well against the majority of tumor cells with agents that sensitize the CA125-negative cells to carboplatin.”