UCLA study finds that one-quarter of California adults are obese 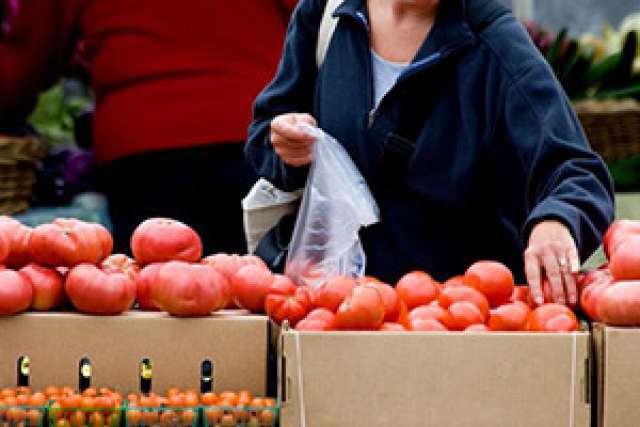 Obesity rates tend to be higher in communities without access to fresh fruits and vegetables.

More Californians than ever are obese, according to a new report by the UCLA Center for Health Policy Research.

The authors also found that 16 percent of Californians ages 12 to 17 were overweight and 17 percent were obese — both figures were relatively unchanged from 2001. Nearly 1 million California adolescents were overweight or obese in 2011–12.

Nationally, 28 percent of adults are obese, according to Behavioral Risk Factor Surveillance System data. Although the California average is slightly below that figure, the UCLA study found that obesity rates in 17 of 41 California counties or county groups are at or above the national level. (The researchers grouped some smaller counties into groups in order to make data sample more robust.)

“Healthy eating requires a combination of money, time and resources, which not everyone has,” said Joelle Wolstein, a research scientist at the center and lead author of the study. “Obesity results from a complex web of factors. Can you get fresh vegetables nearby? If not, can you get to the store? Is there a safe place to exercise nearby?”

The study, funded by The California Endowment, found obesity rates had increased in every major region of the state since 2001. But current adult obesity rates varied widely by county: San Francisco County had the lowest rate (11.3 percent), while Imperial County had the highest (41.7 percent).

Counties and county groups with the highest and lowest adult obesity rates in 2011–12:

* Smaller counties were pooled to create a larger sample.

“It’s a bit ironic that the counties with the highest obesity rates tend to be rural,” said Susan Babey, a senior research scientist at the center and co-author of the study. “We associate the countryside with fresh fruits and vegetables, but these may be the places where it’s hardest to access a healthy diet.”

Most vulnerable more likely to be obese

Lower-income Californians and those belonging to certain racial and ethnic groups had disproportionately high rates of obesity, the report found. Obesity rates among the poorest adults —those with household incomes below 200 percent of the federal poverty level — jumped during the past decade from 24.4 percent to 30.5 percent, a rate 10 points higher than that of higher-income Californians (those whose income was at least 400 percent of the poverty level).

Obesity rates also varied considerably by race, although the figures for all racial and ethnic groups increased during the decade. Groups with the highest obesity rates in 2011–12 were Pacific Islanders (37.1 percent), American Indians (36.2 percent), African-Americans (36.1 percent) and Latinos (32.6 percent) — all markedly higher than the rate for whites (21.9 percent). Asians had the lowest obesity rate, 9.7 percent, but even that figure represented a jump from 5.3 percent in 2001.

Rates within racial groups varied significantly, as well. Among Asian subgroups, for example, 2.1 percent of Koreans were obese versus 20 percent of Southeast Asians.

Predictably, those with unhealthy dietary behaviors — a limited diet of fresh produce and high consumption of sugary beverages and fast food — had higher rates of overweight and obesity. But the study found that other social, demographic, economic and environmental factors played important roles, too. Some examples:

“Low-income communities lack resources such as parks, grocery stores, health clubs and, even in many instances, sidewalks, of which wealthier communities have an abundance,” said Dr. Robert Ross, president and CEO of The California Endowment. “It’s the lack of equity between low-income communities and their wealthier counterparts that is helping to drive the disparities in obesity rates in California and across the nation, and this report confirms that.”