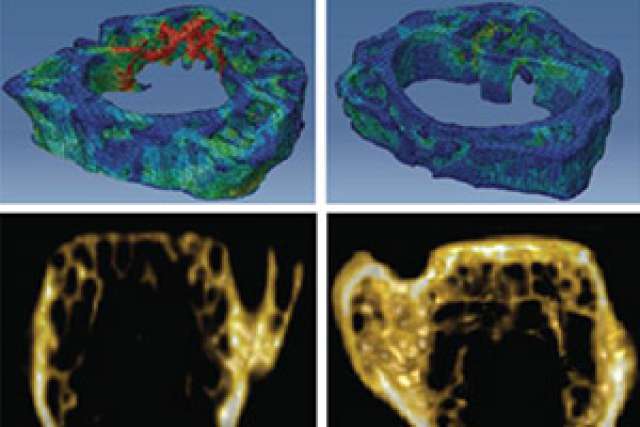 These preclinical results could one day have an impact on the development of a treatment for osteoporosis, which affects more than 200 million people worldwide, as well as potentially help those with traumatic bone injuries, such as members of the military or even astronauts who lose bone density while in space.

The study, published in the journal Nature Communications, was led by co-senior authors Dr. Kang Ting, chair of orthodontics and the division of growth and development in the UCLA School of Dentistry and Dr. Chia Soo, professor and vice chair for research in the UCLA Division of Plastic and Reconstructive Surgery in the David Geffen School of Medicine and member of the UCLA Eli and Edythe Broad Center of Regenerative Medicine and Stem Cell Research.

“Our end goal is really to harness the bone forming properties of NELL-1 to better treat patients with diverse causes of bone loss, from trauma in military personnel to osteoporosis from age, disease or very weak gravity, which causes bone loss in astronauts,” said Ting, who discovered NELL-1 in 1996. Ting had been studying children with craniosynostosis — a birth defect in which one or more of the joints between the bones of a baby’s skull close or fuse prematurely due to overactive bone growth — and found that the NELL-1 protein was closely involved in the overactive bone growth. This discovery presented scientists with the opportunity to study the use of NELL-1 for the purpose of growing bone.

Bone is constantly being broken down and resorbed into the body and then rebuilt in a process called bone remodeling. The two cell types in charge of this process are osteoblasts (which build bone) and osteoclasts (which resorb — or break down — bone). When osteoblasts and osteoclasts work in normal balance, bone remodeling is a beneficial process. But, as people age, bone resorption naturally outpaces bone formation, resulting in some loss of bone density. This can be accelerated in some people due to factors including diet, lack of exercise, genetics and habits such as smoking. Accelerated bone resorption by osteoclasts results in osteoporosis, which makes bone brittle and prone to fracture.

“For the millions of people living with osteopenia and osteoporosis, and others with bone loss, the function of these cells is out of balance,” said Soo, who is also research director for UCLA Operation Mend, which provides medical care for wounded military personnel. “We wanted to see how balance could be restored through the use of NELL-1.”

Next, the researchers administered NELL-1 intravenously in animal models and for the first time showed that NELL-1 could have this same effect on mesenchymal stem cells within the body. Furthermore, the team found that NELL-1 reduces the ability of osteoclasts to resorb bone. The study showed that this dual effect on both cell types significantly increased bone density.

“Our findings are exciting because they have big implications for possible clinical application in the coming years,” said the study’s first author, Dr. Aaron James, chief resident in anatomic pathology in the David Geffen School of Medicine.

The NELL-1 method described above is used in preclinical tests only and has not been tested in humans or approved by the Food and Drug Administration as safe and effective for use in humans.

The study was supported by a California Institute of Regenerative Medicine Early Translational II Research Award and an NIH T32 training fellowship, as well as the UCLA Broad Stem Cell Research Center.