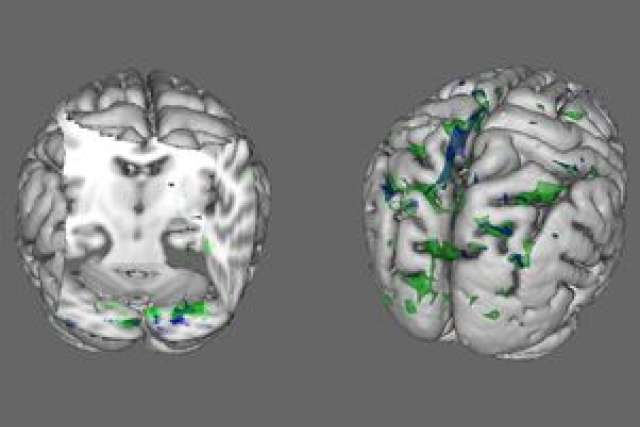 People with anorexia nervosa and with body dysmorphic disorder have similar abnormalities in their brains that affect their ability to process visual information, a new UCLA study reveals.

People with anorexia have such an intense fear of gaining weight that they starve themselves even when they are dangerously thin. Body dysmorphic disorder is a psychiatric condition characterized by an obsessive preoccupation with a perceived flaw in physical appearance.

The researchers found that people with both disorders had abnormal activity in the visual cortex of the brain during the very first instants when the brain processes “global” information, or images as a whole, as opposed to a tiny detail. According to the authors, it could also mean that perceptual retraining may be an effective therapy for both disorders. Perceptual retraining is a behavioral exercise that attempts to help adjust or correct the participant’s balance of global and detailed processing. For both of these disorders, participants are encouraged to not focus on details and process objects more globally.

Previous research on body dysmorphic disorder has shown the same type of abnormal activity in the visual cortex, but the UCLA study was the first to link the locations of the abnormal brain activity with time periods beginning as early as one-tenth of a second after an image is viewed. Understanding that timing is significant, the authors write, because it may help scientists determine whether the problem is in lower-level perception that takes place in the visual cortex, or elsewhere in higher-level brain systems.

The study appears in the current online edition of the peer-reviewed journal Psychological Medicine.

The UCLA researchers used functional magnetic resonance imaging, or fMRI, to detect regional abnormalities in visual processing and electroencephalography, or EEG, to assess the timeline for how the brain processes those signals. They compared results for 15 people with anorexia nervosa, 15 people with body dysmorphic disorder and 15 healthy individuals.

“We now know that these abnormalities may be happening at the very early stages when the brain begins processing visual input, and that the similar distortions in perception shared by anorexia nervosa and body dysmorphic disorder may have similar neurobiological origins,” said Wei Li, a student in the UCLA Interdepartmental Ph.D. Program for Neuroscience and the study’s first author. “This understanding has the potential to lead to new strategies that can improve the way we treat these disorders.”

People with anorexia nervosa have a distorted sense of their body weight and shape. The disorder, which typically develops in adolescence, can lead to social withdrawal, cardiovascular or electrolyte disturbances severe enough to require hospitalization, and even death. There are few effective treatments, and many symptoms can be life-long.

Individuals with body dysmorphic disorder see themselves as disfigured and ugly, even though they look normal to others. Those suffering from the disorder tend to fixate on minute details on their faces or bodies, and distress with their appearance can result in depression, anxiety, shame and severe functional impairment, which can lead to hospitalization and, in some cases, even suicide. The disorder affects approximately 2 percent of the population, making it more prevalent than schizophrenia or bipolar disorder — yet scientists know relatively little about the biology underlying the disease.

Although the two disorders share similar body image distortions, and are often diagnosed in the same person, no previous study directly compared the abnormalities in visual information processing that could significantly contribute to them, nor compared their neurobiology.

“Previously, we knew where these visual processing abnormalities existed in the brain in body dysmorphic disorder, but did not know when they were taking place,” said Dr. Jamie Feusner, the paper’s senior author, a UCLA associate professor of psychiatry and director of the Obsessive-Compulsive Disorder Program at the UCLA Semel Institute for Neuroscience and Human Behavior. “Now, knowing the timing, it is clearer that their perceptual distortions are more likely to be rooted early in their visual systems.

“Also, the fact that the results were recorded while people were viewing other people’s faces and images of houses suggests that this may be a more general abnormality in visual processing,” Feusner said.

The UCLA researchers found that people with anorexia and those with body dysmorphic disorder showed less activity in the regions of the brain that convey primarily global information, although the effect appeared in smaller regions in those with anorexia.

Further, the researchers found that individuals with body dysmorphic disorder exhibited greater activity in the areas of the brain that process detailed information. Interestingly, the more activity they had in these detail-processing regions, the less attractive they perceived the faces to be, suggesting a connection with distorted perceptions of appearance.

Both differences were linked to electrical activity occurring within the first 200 milliseconds after the person viewed an image.

“Among the questions to be answered in future research is whether this dysfunction improves as a result of treatment, and if not, what perceptual retraining techniques could help sufferers of these illnesses,” Li said.

The study’s other authors were Tsz Man Lai, Sandra Loo, Danyale McCurdy, Michael Strober and Susan Bookheimer, all of UCLA; and Cara Bohon of Stanford University. Funding for the study was provided by the National Institutes of Health (NIH MH093535-02S1).