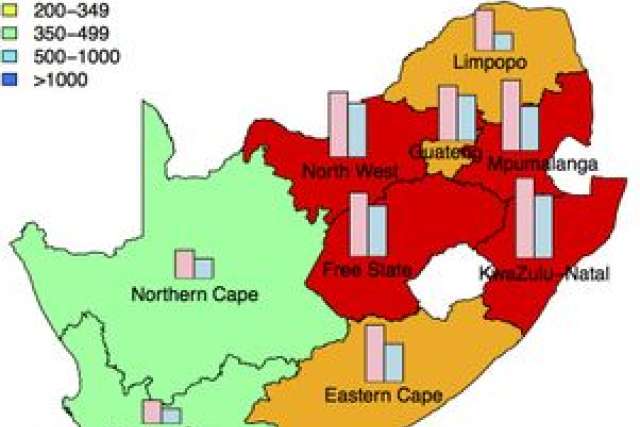 In an attempt to stop the spread of HIV, governments in the region are considering providing antiretroviral drugs to people who do not have the virus but are at risk for becoming infected. Such drugs are known as pre-exposure prophylaxis, or PrEP.

Although the conventional strategy — attempting to attempt to distribute the drugs to people in every city and village — might seem logical and equitable, researchers at UCLA have devised a plan they say would be much more effective in reducing HIV transmission.

The strategy, developed using a complex mathematical model, focuses on targeting “hot zones,” areas where the risk of HIV infection is much higher than the national average. In South Africa, where 17 percent of the population is infected with HIV, the model predicted that targeting hot zones would prevent 40 percent more HIV infections than using the conventional strategy — and would therefore be 40 percent more cost-effective.

“Stopping the HIV pandemic is one of the greatest challenges facing the global community,” said Sally Blower, the paper’s senior author and the director of the Center for Biomedical Modeling at the UCLA Semel Institute for Neuroscience and Human Behavior.

The report appears in the current online edition of Nature Communications.

“Since results from clinical trials have shown that antiretroviral drugs are effective in protecting individuals against HIV, the big question now is how best to use them,” said David Gerberry, the study’s first author and a former UCLA postdoctoral fellow who now is an assistant professor in mathematics at Xavier University.

The researchers then used the model to predict where, and how many, new HIV infections would occur based on using either the conventional strategy or a strategy targeting hot zones for distributing the drugs.

“Our results are quite striking,” Blower said. “Both strategies would provide PrEP to the same number of people, but using the hot zones plan would prevent 40 percent more HIV infections than using the conventional plan.”

Gerberry said the team’s strategy could be applied to other nations as well. “The methods we developed can be used to find hot zones in any other sub-Saharan countries that have geographic variation in the severity of their HIV epidemic, such as Lesotho, Botswana, Nigeria and Uganda,” he said. “Once the hot zones have been found in these countries, our spatial optimization algorithm can be used to identify the geographic targeting strategy that would be the most cost-effective.”

Blower said the study holds great significance for global health policy. “The findings show that, when interventions are rolled out, governments in sub-Saharan Africa will have to choose between maximizing equity in access to the drugs and minimizing transmission of HIV.”

The study’s other authors were Bradley Wagner of UCLA, and J. Gerardo Garcia-Lerma and Walid Heneine of the Division of HIV/AIDS Prevention at the Centers for Disease Control and Prevention. Funding was provided by the National Institutes of Health’s National Institute of Allergy and Infectious Diseases (Grant R01 AI041935).