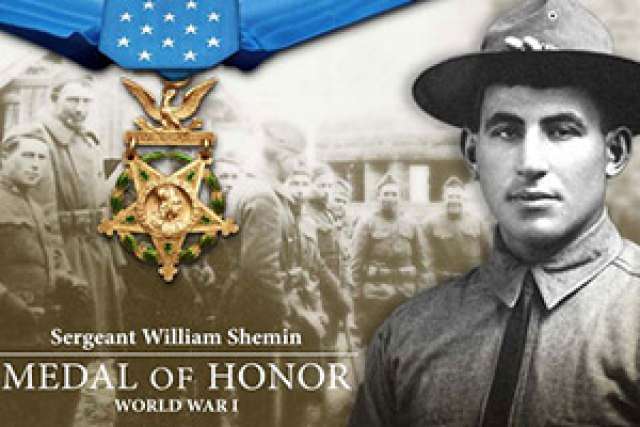 Dr. Richard Shemin, chief of cardiac surgery at UCLA, always knew that William Shemin — his cousin twice removed — “was a phenomenal war hero,” although the former World War I sergeant “never talked about the war himself.

“But everyone in the family knew that, as a 19-year-old kid, he ran out under heavy gunfire three times and dragged back people who were wounded,” said Shemin, the Robert and Kelly Day Professor at the David Geffen School of Medicine at UCLA.

For years, William Shemin’s daughter, Elsie Shemin-Roth, maintained that the country never gave her father the recognition he deserved — the Medal of Honor, the military’s highest honor — because he was a Jew.

Her relentless campaign to win the medal for her father for the bravery he showed on the battlefield in 1918 near Bazoches, France, came to fruition on Tuesday when President Obama awarded William Shemin the Medal of Honor posthumously and presented it to Shemin-Roth and her sister, Ina Shemin Bass, as 64 other relatives watched at the White House.

“It was unbelievable,” said Dr. Shemin, who attended that ceremony and another held today at the Pentagon to witness his cousin’s induction into the U.S. Army’s Hall of Heroes. The family was feted at receptions, band performances and other events.

In his remarks, Obama said, “Sergeant Shemin served at a time when the contributions of Jewish Americans in uniform were too often overlooked, but William Shemin saved American lives.”

Shemin, who is co-director of the UCLA Cardiovascular Center and executive vice-chairman of surgery, grew up in Little Rock, Arkansas, and spent time with his war-hero cousin when he came to Hot Springs, Arkansas, to soothe his war injuries in the mineral baths. The cousin, who started a plant nursery after the war, grew the business into an international agricultural concern.

“It’s just a matter of pride … and a feeling of accomplishment,” said Dr. Shemin, in describing how he felt. “Elsie was the one who took up the charge because she always felt he deserved it. Her father was just happy with what he had” — a Purple Heart and the Distinguished Service Cross.

“He was a man who loved his country,” Dr. Shemin said.